Flat shoes are in; heels are over the hill | Inquirer Lifestyle ❮ ❯ 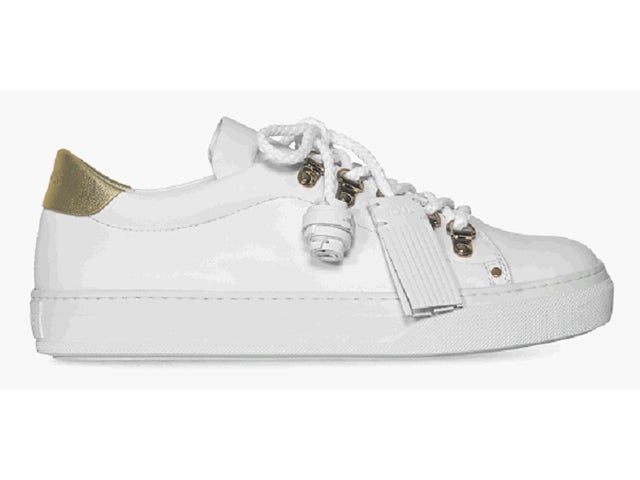 Flat shoes are in; heels are over the hill

It would take several seasons after fashion wags first took note of Phoebe Philo wearing white trainers at the end of her Celine runway shows, before fashion editors—used to teetering in heels on a daily basis—fully embraced and elevated the once-unfashionable rubber-soled shoes for the every day. They began wearing their box-fresh whites even with the most feminine and fancy dresses.

However, it was when Victoria Beckham declared that she “just couldn’t do heels anymore,” took a bow at her show in February in Stan Smiths, that we knew the tide had truly turned.

The pop star-turned-designer—synonymous with vertiginous heels—even sent out flattering, pointy flats with her Fall-Winter 2016 collection.

True enough, the trendsetting mom of four, 42, once advised by her doctor to ditch heels to treat her misshapen feet, would subsequently be photographed on the streets often in more practical, comfortable footwear.

“I just can’t do heels any more. At least not when I’m working,” she told The Telegraph.

It’s probably part growing older and part getting wiser, that even some women we often see in the fashion beat looking so chic in their stilettos now confess to switching to flats and sneakers more and more, because pain and blisters, they say, cancel sexy.

“I wear flats during the day and save my heels for special occasions when I go out at night,” says Vicki Abary, a brand marketing consultant and former editor in a luxury magazine. “Even my heels have lowered from a sky-high four inches to a more modest height.”

“I wear a lot of heels on weekdays for work, but I live in sandals or Toms on weekends,” says Dina Tantoco, marketing communications manager at Rustan’s. “For heels I always try to look for comfy ones. So when I find a pair, I buy them in two colors and I use them to death!”

Brands and designers seem to be listening to women like Abary and Tantoco around the world, as proven by the variety of style options for both sneakers and other sensible shoes.

The luxury brands alone have come up with embellished—embroidered, crystal-studded, jeweled—styles (think Dior, Prada, Roger Vivier, Givenchy) that look just as pretty as their spindly cousins. Then there are the premium-brand sneakers (Common Projects, Eytys, Golden Goose) that command five-figure price points, as well as design collaborations with street-style influencers and celebrities (Kanye, Rihanna).

There are also the revival of vintage and old-school favorites, like the Stan Smiths and its many new incarnations; the Adidas Superstars and the Nike Cortez, among others. Then there are the countless feminine flats, as well as men’s style shoes adapted for women. All these trends, of course, the high-street brands have covered.

“I used to live in heels and teeter from one event to another,” recalls Zo Aguila, former editor in chief of Cosmopolitan Philippines. “Being three to five inches taller always seemed to add that necessary oomph to my step. I liked that being in heels forced me to stand tall and confident. They helped vertically challenged women like me own a room or be someone we weren’t. I welcomed that.”

Adds the communications consultant: “Recently, though, I find myself drawn to pretty, comfy flats. Possibly my five recent shoe purchases were of work flats that are as comfy as they are cute. Comfort has now become my source of confidence, and I love it. Maybe it’s age, but most likely it’s really a change in perspective. I suppose it has something to do with being simply comfortable with how and who you are. I am able to move better and feel better, all without the pain on the balls of my feet or the pinching of my toes.”

Even women in their 20s, possibly more circumspect than many women in Beckham’s generation, are now making more prudent choices when it comes to shoes.

“I had a lot of Nike Dunks and I used to wear white sneakers all the time even before it became a trend,” says Jeanger Navarro, an executive at luxury retailer Stores Specialists Inc. “But when I joined SSI a couple of years ago, I kind of had to wear heels for work especially to our events, so I bought my first pair of ’killer’ heels… But recently I’ve rekindled my love for flats and sneakers, thanks to the overwhelming style options available nowadays.”

Her colleague, Gail Cowper, says she always has flats on standby when she has to wear heels.

“I know some outfits would look much better with heels, so a good compromise I have on aesthetics and comfort would be chunky heels or wedges, which I can wear all day long, even when I drive.”

Stef Cabal Rostoll, former magazine editor and co-author of LOOK’s “Help! I’m a Shoe Addict!,” looks back with regret at the folly of her youth, buying pair upon pair of expensive, killer shoes that often lynched her feet.

“I almost bankrupted myself for shoes— towering heels—that are sometimes simply pretty to look at, but are quite a pain to wear,” she says. “Heels shared equal space on the shelf—talk about devotion!—with my books. I would even make shoe vignettes of my fave pairs at home.”

Having recently married, moved homes and moved to another country, Rostoll has learned to scale down since “you can only pack and bring so much with you. Tennis and walking—a lot of walking!—made me see the value in a pair of comfortable trainers.”

Unlike most of these women, Christine Dychiao was an early heels-code breaker. The blogger, who also runs the fashion e-commerce site shoptilda.com, has “always been a flats kind of girl.”

“I’ve been wearing flats since I started working, and was probably the first to break the office-uniform policy,” she says. “I’m all about comfort, and never really mastered wearing heels so I guess I’m a flats kind of person for practical reasons. I became all the more convinced that I was never meant to wear heels now that I have three kids… I only wear heels when I know I will be seated most of the time.”

But even these same women admit they would be lying if they say their heartbeats don’t go racing at the sight of a gorgeous pair of heels—blisters and bunions be damned.

“I slip them on when I need to bring on my alter ego or if I want to feel tall or sexy—still me, only wearing a different hat,” says Aguila.

On date nights, says Rostoll, her heels are non-negotiable. “On most days, though,” she adds, “I am in sensible flats and still feel like a goddess. It comes with age.”