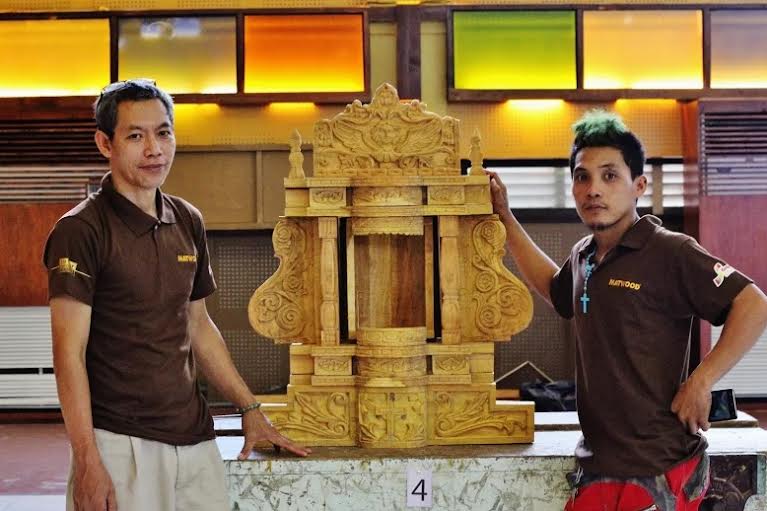 AN ENTRY in the first "urna" carving competition of the first Lalik Festival. PHOTOS BY EDGAR ALLAN M. SEMBRANO

Urna, vaguely translated into  “house shrine,” is a delicately carved wooden housing for santos, or religious icons, found in most parts of the country.

But those made in Bohol before were uniquely exceptional for the high quality of their design and artistry.

The revival of urna-making was disclosed during the Sandugo, or Blood Compact, festival in Bohol this weekend.

Fr. Valentino Pinlac, rector of the Immaculate Heart of Mary Seminary here, said the revival of the age-old tradition along with other creative industries was conceptualized after the 2013 earthquake, which destroyed and damaged churches and church properties in the province.

Aside from earthquakes, urnas in the province had been depleted due to antique collecting, the priest added.

Pinlac spearheads the staging of the Lalik (carving) Festival incorporated in this year’s Sandugo celebration. He said Lalik aims to develop and enhance the woodcarving skills of local artisans while boosting livelihood in the province.

Lalik features an urna-making competition that will not just showcase the artistry and creativity “but also Boholano cultural identity and religiosity as well as sustainability in the lives of the Boholanos through the craft,” Pinlac explained.

He said the carvers were given lectures first by experts, one of them Ino Manalo, head of the National Archives.

“If this particular tradition continues, I guess so many people will be able to move on and live life better,” said Pinlac.

Grand prize winner of Lalik was Arsenio Lagura Jr. of Albuquerque town, whose retablos at the Santa Monica Church  damaged by the earthquake will be inaugurated on Aug. 27.

Meanwhile, also part of the yearly event commemorating the 1565 blood compact between Spanish conquistador Miguel Lopez de Legazpi and Datu Sikatuna in what is now Loay town is the Sandugo Trade Expo being held at Island City Mall in Tagbilaran City.

Department of Trade and Industry Bohol provincial officer-in-charge Marisol Balistoy said the fair was the biggest so far in the Sandugo. Fairgoers are treated to an extensive line of native products ranging from food to local arts and crafts, she explained.