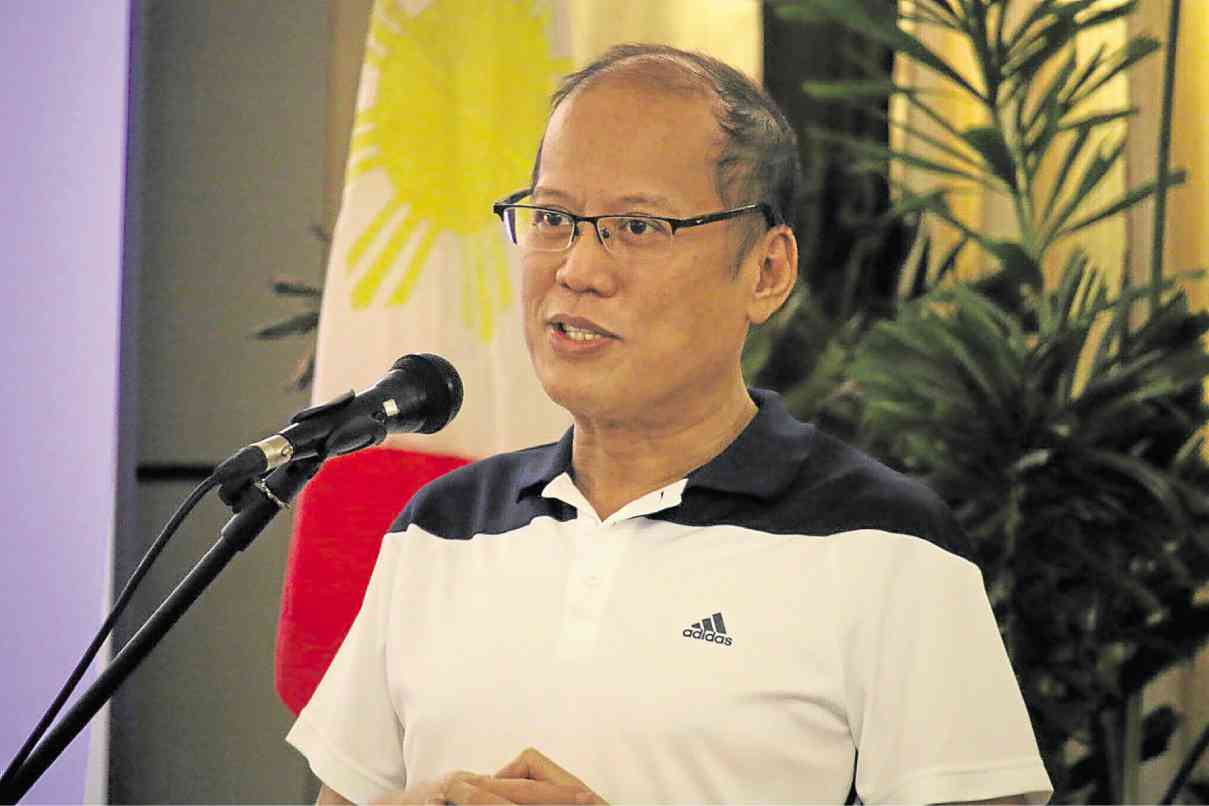 CITIZEN Noy gives a speech before members of The Silent Majority at the group’s gathering in Club Filipino last July 2. PHOTO BY LEO PARAS/THE SILENTMAJORITY

Who would’ve thought that the first month of former President Benigno Aquino III as Citizen Noy would be a series of highs and lows?

It’s likely that Aquino himself expected that he would not be given some peace and quiet, even if that was what he wished for in the last months of his administration.

He often said, during his time as Chief Executive, that he disturbed a lot of rice bowls in trying to set things right for government and ultimately the people. He knows many will not let him get away with his messing with their sumptuous meals.

The recent days saw a setback in his six-year campaign against corruption, but Aquino was ready with a firm statement: “By ordering the release and exoneration of Mrs. [Gloria Macapagal] Arroyo, what is the Supreme Court saying: That nothing anomalous transpired? That no crime happened? That no one should be held to account? That the funds were used properly?”

He added: “What is the recourse now of the Filipino people, when it is clear that a substantial amount of public funds did not go to the intended services, which would have alleviated the suffering of many of our countrymen?”

Aquino maintained that the disbursements of the P365-million funds of the Philippine Charity Sweepstakes Office (PCSO), with the approval of Arroyo, were anomalous.

“In total, P365 million was released by PCSO over the course of three years, with P244.5 million, as stated in the report of [the PCSO budget officer], transferred to the Office of the President. The overwhelming bulk of the funds, at 66.9 percent, were used for activities not sanctioned by the Charter of the PCSO,” Aquino said.

It’s safe to assume that Aquino, as he is wont to do, would be in deep thought—reflecting, analyzing—about every salient point of the plunder case as against the Supreme Court decision that exonerated his predecessor.

But the controversial decision of the High Court undoubtedly will not overshadow the historic ruling of the Permanent Court of Arbitration at the Hague in affirming the Philippines’ position in the South China Sea maritime dispute.

Aquino and his lean staff waited for the verdict to be available for download. He read the summary line by line, and, if we could hazard a guess, with a green highlighter in hand.

Aquino and his team put together an elegantly written statement, the kind of response a true statesman gives. Then, true to form, he celebrated the country’s triumph quietly.

He’s been out of the public eye for most of the first month that he’s become a private citizen again. He’s had quality time with his family as well, as his sister Kris Aquino posted on Instagram.

The former President joined them for Mass and then for lunch. Then he drove a Porsche, with Kris and her sons Josh and Bimby as his passengers.

On the morning of his first full day as a private citizen, Aquino had to issue a statement on the first court case filed against him. His critics had threatened they would deluge him with lawsuits.

“I don’t know what he was thinking, but my impression was, he is more relaxed now,” Cabangon said of Citizen Noy.

On July 2, Aquino surprised members of The Silent Majority (TSM)—an online group that campaigned for Mar Roxas and Leni Robredo—at their meet-up and tribute for him at Club Filipino in San Juan. Most, if not all, except for those who invited the former President, did not know that Aquino would join them that night.

It was perhaps one of the most intimate interactions Aquino has had with his “bosses,” ordinary Filipinos who volunteered their time and personal resources during the campaign.

One of TSM’s founders, Jozy Acosta-Nisperos, told the Inquirer that, postelections, the group “wants to be a leading social media force in developing an engaged, enlightened and empowered citizenry as it relates to selecting leaders who will bring our country forward, defining our national identity, and leading conversations on national issues, thus creating a mindset of country above self.”

As casual as a former commander-in-chief could get, Aquino showed up in an Adidas sports shirt, denims and sneakers.

In a speech, he talked about his time in office, the challenges he faced and what his administration achieved for the Filipinos in the six years that he was given to lead the nation.

Aquino also spoke about how the recent elections appeared to have tested even the personal relationships of Filipinos.

“As there are people who have been celebrating the outcome and some are still coming to terms, one thing is clear, this is one country we share. One thing for sure—that we should all contribute to the product that we all want to achieve… Kung maganda ang ginagawa, tulungan natin,” he said.

Aquino stayed for almost an hour and indulged his supporters with selfies and groufies.

The next day, he went to Tagaytay with his staff to attend the wake of the father of Francis Tolentino, who served as his Metropolitan Manila Development Authority chair.

Unpacking in his newly renovated Times Street home has also been keeping Aquino busy. One can only imagine how much memorabilia a former head of state could accumulate throughout a six-year term.

Aquino’s own downsized staff and security are also getting the hang of reporting for duty at Times. They, too, have been fixing their office, which occupies a part of the remodeled Aquino family home.

Months before he stepped down from office, Aquino repeatedly said that he would want to be a tourist in his country. He’d like to go to Boracay. While not exactly a beach person, he still wants to try to feel its famous sand. It’s also part nostalgia—Boracay was where one of the most memorable photos of his mother, former President Cory Aquino, was taken.

Aquino has always wanted to go on a food trip around West Triangle with his former executive assistant, Jun Delantar, and former Undersecretary for Communications Rey Marfil, on his first day as private citizen.

On the eve of Aquino’s departure from Malacañang, Marfil and Delantar actually had dinner together, inadvertently excluding their boss following some miscommunication.

The next day, he summoned Marfil and Delantar to sit with him at the table throughout lunch in Times, a punishment of sorts for having left him out in the cold the night before.

Marfil told the Inquirer that their food trip is on hold until Delantar, who is now a prosecutor in his hometown, visits Manila.