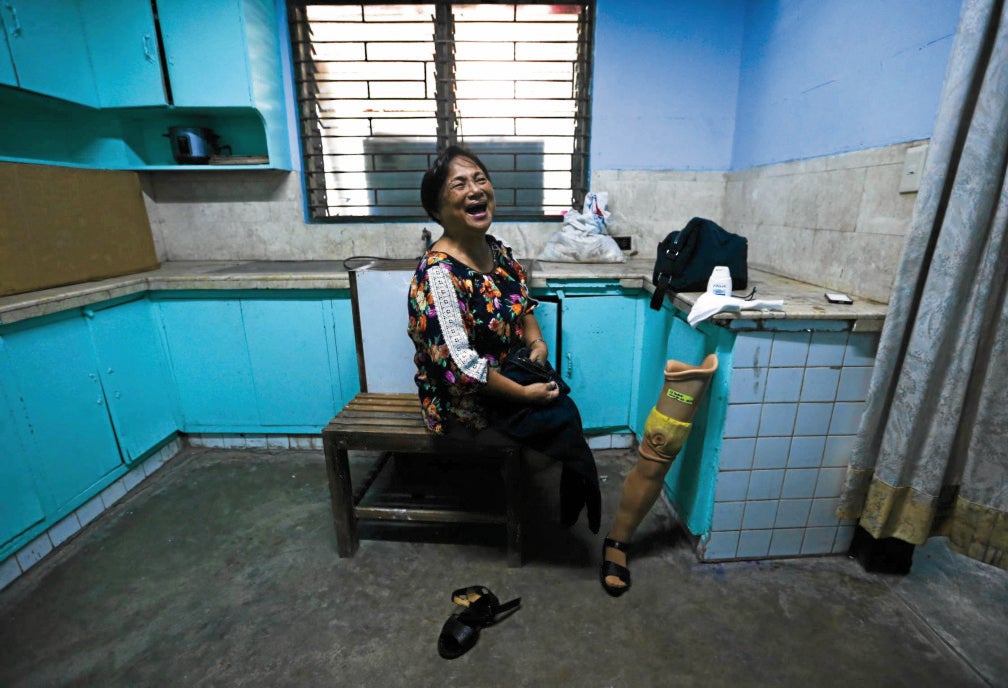 GIVEN A LEG UP Retired teacher Fe Bueno’s face says it all. The Isabela native says the prosthetic leg she got from PBF Prosthesis and Brace Center has enabled her to enjoy an active life despite being an amputee. LYN RILLON

He shows a T-shaped bar he made in his workshop to control the brake and to change gears.

Another lever he installed below the dashboard is used to manipulate the accelerator using his right hand.

The farthest he has done long-driving on his own, he said, is in Jala-Jala, Rizal province.

Fernando Santos, 56, was stricken with polio when he was a year and three months old.

To move around, he uses a wheelchair. He is a person with physical limitations, but certainly not in how he lives.

Santos is the founder and manager of PBF Prosthesis and Brace Center, based in the Tahanang Walang Hagdan (TWH) compound in Cainta, Rizal.

TWH is a shelter, training and livelihood center for people with disabilities.

Santos’ parents, particularly his mother, were supportive of him. “I wouldn’t have become who I am today if not for them. My mother told me to study well, to work hard. I never forgot that. She was my inspiration,” he said.

His mother earned a living as a sewer. As a young boy, he would help her sew buttons on some of the clothes she made.

But as he grew older, the reality of growing up and being left behind at home by his siblings as they moved forward to make  their own lives dawned on him. Friends would visit, but the loneliness would return after they had left.

It was then that he decided to take control of his life. At 13, he received permission from his mother to leave the security of home to work for a relative in Davao. The experience gave him a better understanding of himself.

But he still longed for the company of people like him. This he found when he went to work at 17 years old at the TWH.

“I decided that life for me is here,” he said.

The founder of TWH, Sister Ma. Paula Valeriana Baerts, sent Santos to Trinity College in Quezon City where he took up education. But it was after taking a two-year special course conducted by French teachers from Handicap International from 1987 to 1989, as a trainer in prosthesis and orthosis that he discovered his true passion.

“I never realized how good it felt to be able to help others. I gave someone a prosthesis, he walked, and I was so happy I couldn’t sleep,” he said.

Santos eventually put up his own business, manufacturing prostheses, or artificial limbs, and orthosis, an apparatus that strengthens the weak parts of the body. The PBF Prosthesis and Brace Center is a social enterprise, not one that is purely for profit, and it is intended to help people with disabilities.

Rosanna Abanto received a prosthesis from the center. Diagnosed with diabetes late in life, she underwent surgery in January to amputate her left leg below the knee due to an infected wound.

Abanto and her husband, Danilo, commuted from their home in Las Piñas to Cainta to get her very first prosthesis from PBF. She had been using a walker, unable to manage with crutches to get around.

Wearing the prosthesis, she walked back and forth several times between two parallel bars to test its fit and her balance. She looked pleased, but slightly worried.

Speaking in low tones, the couple revealed not having enough money to cover the cost of the prosthesis, having only a Philippine Charity Sweepstakes Office (PCSO) guarantee letter for P30,000 and a bit more than P1,000 in cash that they had solicit elsewhere.

After explaining their situation, Santos readily agreed to waive the balance.

Fe Bueno, a retired teacher from Reina Mercedes in Isabela province, has been a client of PBF for 20 years.

At 13, Bueno had an accident that led to the amputation of her left leg above the knee.

She said she never experienced ugly teasing over her physical disability. Both her parents were educators themselves and her older brother strongly encouraged her to finish her studies. With persistence, she eventually earned a bachelor’s degree and then a master’s degree in home economics from Polytechnic University of the Philippines Manila.

“Love life. Love yourself. Nobody will help you if you do not help yourself,” she said.

Bueno commuted to PBF by bus from Isabela to fit her new prosthesis, which would be in addition to a pair she was using for indoor and outdoor activities. She paid for the prostheses with her own funds, but still did not hesitate to ask for a senior citizen’s discount from Santos.

Many of PBF’s clients are indigent. They are referred to the PCSO for help in paying for prostheses. If the financial assistance is not enough to meet the full cost, Santos decides to help the patient himself.

“[I]f you know that the patient really has no money and he does not want to go to the PCSO (for some legitimate reason) but he has P10,000 on hand, why not?” he said.

With some clients, he has to give money for transportation for them to go home. Whatever loss can eventually be made up for over time through customers who can afford to pay, he said. All customers, however, receive the same product quality.

Santos said he had received overseas job offers, but had been prevailed upon by Baerts and TWH cofounder Pieter Berteloot to stay and serve Filipinos with disabilities.

On July 18, he received the Most Outstanding Person with Disability award from the Department of Rehabilitation Medicine, College of Medicine, Philippine General Hospital-University of the Philippines Manila.

Santos is also president of Manila East Safety Riders Association of Rizal Inc., an organization of riders with disabilities in Rizal who help out in community affairs such as Brigada Eskwela, blood-letting drives and first aid or emergency assistance.

Santos believes his life has been enriched by his physical disability.

“Had I not gone through this, I might not have developed the desire to help others nor would I have become as resourceful,” he said. TVJ/rga