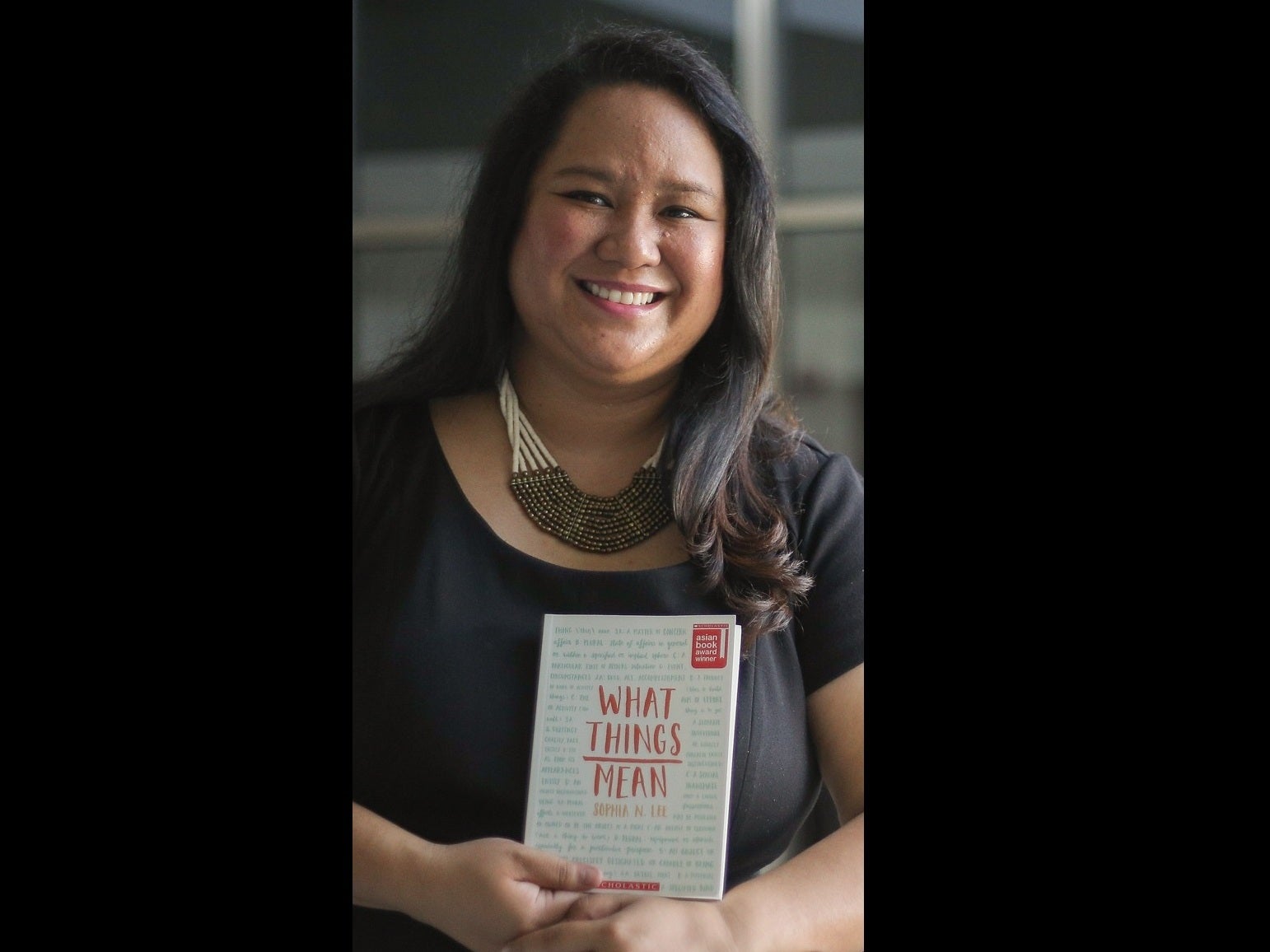 DEFINITIONS are important to Sophia N. Lee. As a child, she adored dictionaries.

“On my bedside table there would always be a dictionary, because I loved reading and I just loved looking up words,” the 34-year-old Lee remembers.

She has added another definition to herself: award-winning writer. In 2014, Lee took the top prize in the Scholastic Asian Book Awards.

Yet the story of how this all happened is not as tidy or as predictable as entries in a reference book. Lee had initially wanted to be a lawyer—becoming a writer was the last thing on her mind—and it would take, of all things, flunking the bar exams to trigger her love for writing.

Sophia Marie Nulud Lee was born in Manila and grew up in a home full of people from Tarlac. Her father Donn is a lawyer and her mother Virginia is an accountant and real estate broker. She took up Broadcast Communication at the University of the Philippines Diliman before taking up law at the UP College of Law in 2004.

“It took me a while,” she says. “That was when I was getting a bit disenchanted and I wanted to do other things.”

She took a leave of absence for a year and did the aforementioned other things: worked as a lifestyle editor for a magazine, wrote scripts, styled shoots.

“I tried to do as many things as I could in that year,” she said. Lee eventually returned to law school and finished in 2010.

Lee took the bar exam in 2010 and failed. “It was the wrong move,” she says. “It was a very devastating point. It was such a public thing because my dad has a firm and everyone knew I was preparing to work there. I shut myself off.”

Lee became a shut-in, working as a content provider for a website that didn’t require her to leave the house. Her editor wrote her saying she was pretty good and encouraged her to write more.

“She was the first person who told me I could actually write. For me, up to that point, writing was a stepping stone, something to get me to law school.”

It got Lee curious and, in one of her first forays outside her home that year, Lee became interested in taking the MA in Creative Writing at UP. She passed the talent test.

“Coming from law school, it was such a different thing,” she says. She kept coming back for class after class. “I was just really having fun. It reminded me that I really loved school, that I loved learning new things. I thought it would be trial period to see if I really liked writing, but I loved it.”

This was when she began working on what would become “What Things Mean.” The manuscript began life as a required project for her creative writing for young adults class under professor Heidi Eusebio-Abad. It took Lee the entire semester to write it.

“It was really my first foray into writing,” she recalls.

The use of dictionary entries for the book came by accident. “What Things Mean” begins with a definition of the word “jars.” Lee was in the kitchen planning to cook pasta—her favorite dish—but found herself struggling to open a jar of pasta sauce.

“It upset me. If I lived alone, I wouldn’t be able to open my own jars. It became a symbol of independence.”

Lee posted the dictionary entry for “jars” on the top of the page to guide her. “But when I looked at it together, it made sense to me.”

Every chapter in “What Things Mean” begins with such an entry.

“What Things Mean” is the story of 14-year-old Olive Guerrero, a tall, asthmatic girl who doesn’t know who her father is. Her mother won’t tell her no matter how often Olive asks. She’s the oddball who loves pickles when no else does and reads obituaries in the newspaper. Despite her height, she’s practically invisible at home and at school.

Everything begins to change when Olive freaks out after getting an accidental makeover at the department store makeup counter. It’s the beginning of Old Me versus New Me, with Olive plunging further into the mystery of her father’s identity.

Abad told Lee that she should join the Scholastic Asian Book Awards (Saba), a biennial contest in Singapore meant to encourage diversity in children’s literature in Asia through novels meant for readers age 6-18. Abad told Lee that her novel had a chance.

“I didn’t want to believe her because I hadn’t written anything until that time,” Lee remembers. Lee had been a fellow of the venerable Silliman University National Writers Workshop; there, colleagues had encouraged her to enter the contest as well.

Lee didn’t actually think she would win, even as she was named one of the finalists and she went to Singapore with her parents—“to console me after I lost,” she admitted.

She received Singapore $10,000 and a chance for her book to be considered for publication by Scholastic Singapore. It took a while; Scholastic required a long editing process and seven months went by before the company asked her to make it longer. The original novel became three times as long—9,072 words became 26,000—after nine months. But Scholastic now wanted to publish it.

There’s a reason for that. “What Things Mean” is inventive and engaging, with the reader easily falling for the protagonist Olive and becoming invested in Olive’s search for her father and quest to find herself in a swiftly-changing situation. “What Things Mean” is an extremely accessible, rewarding YA title.

With her agent Andrea Pasion-Flores, Lee signed a deal with Scholastic that gave the publishing house the Asian rights to “What Things Mean,” as well as the first look option for her next novel.

Lee has already begun work on the first pages of that next YA novel. “I’m always starting things. There are so many ideas in my head,” she says. Since she’s from Pampanga, and considers herself a foodie, she wants to write something about local cuisine.

In August, she’s decamping to New York to begin her MFA program specializing in writing for children and young adults at the prestigious the New School in Manhattan.

“I hope that I’ll be able to work on it there,” she says. Lee is excited by the school’s roster of mentors, which includes two of her favorite YA authors, Sarah Weeks and David Levithan. “I’m excited to see what I’ll learn from there.”

This has all brought her to an important moment of realization: “When I was growing up, we didn’t have a lot of local writers, especially YA, to read. And I always wondered, where are the people who looked like me? I tried to remember the places I could recognize. For me, just being able to contribute to that field so that other people will have that, that thing that I never had, is great.”