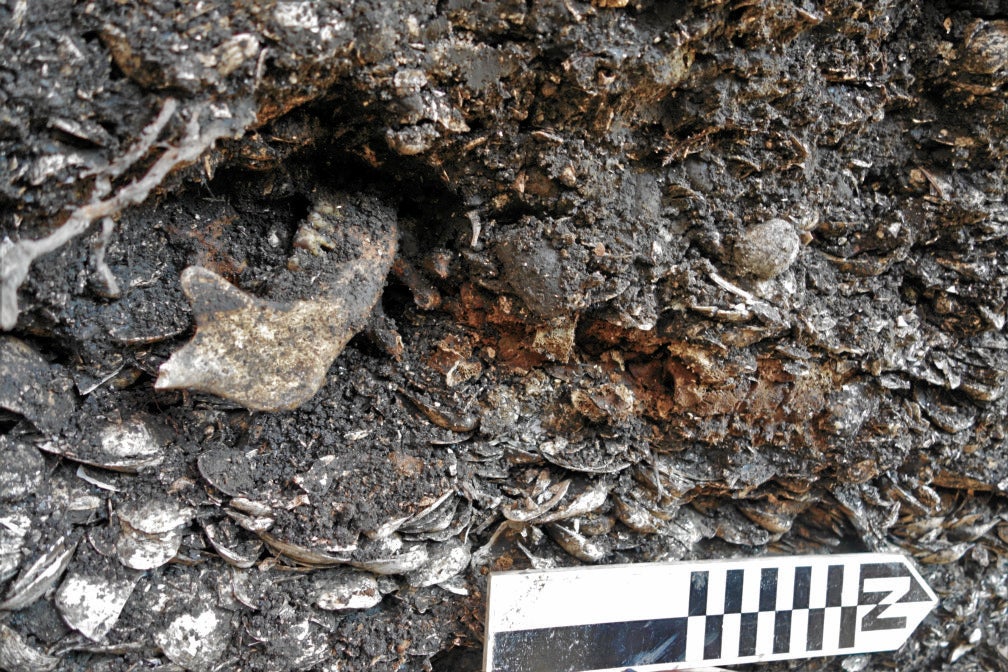 A HEAPOF SHELLS found in a pre-Spanish burial ground in Camaligan, Camarines Sur province. Called a shellmidden, the underground shell deposits indicate possible signs of prehistoric activity, according to scientists

CAMALIGAN, Camarines Sur—A team of archaeologists and graduate students from different universities in the United States accidentally found a pre-Hispanic burial ground amid an ongoing construction work of a multipurpose building in a former cemetery here on Monday.

The team, led by archaeologist Dr. Stephen Acabado, was surveying an old church in the village of Santo Domingo in the town along the Bicol River when they stumbled on the burial ground.

“We (archaeological team) were visiting the Camaligan church when I asked my group to see first the (Bicol River). Passing by the old cemetery, I saw there’s construction going on and diggings. When I entered the construction site I immediately saw the shell midden. Wow!” Acabado said.

A shell midden is a heap of shells deposited underground, indicating possible signs of prehistoric activity, according to Dr. Zandro Villanueva, collaborating archaeologist.

Acabado said a construction worker disclosed that they also found some human bones and shreds of pottery in the area.

He said he immediately called the National Museum, which instructed them to collect and document artifacts. They were also told to coordinate with the local government and ask for the suspension of construction until they finished the documentation of the area.

Acabado said they were able to collect the artifacts and finish their documentation after four hours of work on Tuesday. The construction resumed after the archaeologists had cleared the area.

Ryan Rabang, village chief of Santo Domingo, said the property was formerly owned by the Catholic Church. It was swapped with another parcel of land in the town that the municipal government owned.

Rabang said the site had been a graveyard and was now under the jurisdiction of the local government of Santo Domingo.

He said the local government heeded the request of Acabado to avoid more construction in the vacant areas to give way to future excavation at the site.

Queeny G. Lapeña, an archaeology graduate student from the University of California in Los Angeles (UCLA) involved in the documentation, said the artifacts found may be prehistoric.

Acabado said the find could date back to the pre-Hispanic period. It may even be pegged at 1,000 to 1,500 years ago through carbon dating of the artifacts.

Lapeña said the heap of shells indicated the diet of the inhabitants as described by Bishop de Salazar in his account of the riverside place in 1588.

“There is a river where fish abound in great plenty … and many black shellfish, the latter being gathered at the river,” Salazar had said.

Located at the vast alluvial flatland of the Bicol River Basin that stretches 95 kilometers from Albay province to the two Camarines provinces, the site had been under a “specialized subsistence economy,” she said.

The lead archaeologist is also undertaking a study of Ifugao where he found the controversial evidence from carbon-dating and agricultural practices, which revealed that the rice terraces there were just about 400 years old and not thousands of years.

“It is said Philippine historical narratives of pre-Hispanic period were written by and for the Spaniards but in archaeology, you usually look at everyone and get data from the things used by common people so that you have a wider breadth of source of information and knowledge,” Acabado said.

He said the find in Santo Domingo could give “voice” to the pre-Hispanic Filipino ancestors encountered by the Spaniards two years after initial contact when the colonizers started to establish the mission in the lowlands.

Acabado, who is connected to the UCLA’s Cotsen Institute of Archaeology, said that most archaeological sites are located within churches.

“There is an animistic belief system of a spiritual power in the graveyards so that churches built by the Spaniards were located there for the new converts to regard churches as sacred,” he said.

Villanueva said the new find would be part of the Bicol Archaeology Project in partnership with the Archdiocese of Caceres, UCLA, National Science Foundation and Hellman Fellowship. TVJ