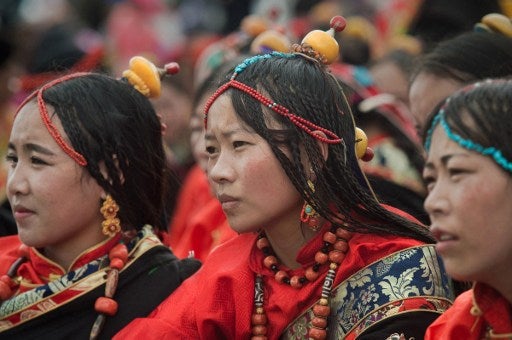 In this picture taken on July 26, 2016 ethnic Tibetans wearing traditional costumes and jewellery, watch a fashion show at a local government sponsored festival in Yushu, in the northwestern Chinese province of Qinghai. The festival held since the 1990s lasts for around five days. It was suspended for several years following a 2010 earthquake in Yushu which killed some 2,700 people. / AFP PHOTO / NICOLAS ASFOURI

On the northern bank of the Yarlung Tsangpo River is the Samye Monastery. Boasting a 1,300-year history, this monastery in Shannan, in the southern part of the Tibet autonomous region, is the earliest Buddhist monastery in Tibet.

One morning in late July, about 200 local people chant folk songs, dance in unison and simultaneously plaster the floors of the monastery using a mixture of pebbles, mud and water to pave the floor and the roof of the structure, as part of an event called da a ga.

The work will go on for at least 10 days.

After the plastering is done, the gathered people use elm sap to polish the material and coat it with rape oil to make the surface smooth and water-proof.

“As this method is very time-consuming, ordinary Tibetans no longer use it for their homes,” says Champa Tsering, director of the Shannan cultural heritage bureau.

The renovation of the main temple of the monastery began in April, though a three-year rehabilitation of its auxiliary structures was completed in 2015.

In the 1980s, the monastery was renovated using cement.

But Champa Tsering says the cement will be removed this time and the facades will be restored using the da a ga method.

“The traditional material offers more flexibility compared with cement, especially when there are rainstorms or earthquakes,” he says.

The temple’s drains will also be repaired and the rotten lumber replaced.

A grant of 12 million yuan ($1.8 million) from the central government is being used to fund the ongoing work on the main temple.

Residents from neighbouring areas are being hired for the project and each of them is paid 180 yuan a day, says Champa Tsering.

The renovations of Buddhist sanctuaries in Tibet is taking different forms.

For example, in the Drepung Monastery, the biggest monastery in Lhasa, capital of the Tibet autonomous region, experts from the Beijing-based Chinese Academy of Cultural Heritage are working with the lamas to save the fading frescoes.

The monastery was built in 1416, but it was expanded over the next few hundred years, which led to a section of the frescoes in the Tsokchen Temple, the main structure, being hidden since the 18th century.

“The frescoes in the Drepung Temple are key to studying the development of Tibetan Buddhist art,” says Guo Hong, a researcher from the academy, who has led the restoration work since 2012.

“They offer abundant material to study Tibetan history and society.”

Speaking of the restoration process, Ngakwang Chozen, a high-ranking lama and deputy head of the administration committee of the monastery, says: “We were undecided on repairing the frescoes at first. But these frescoes with Buddhist deities have a special place in pilgrims’ hearts.

“And, if they are not in a good condition, people would be sad. So, we felt it was better to make them look bright again.”

After studying other restoration work done by the academy, Ngakwang Chozen gave his approval for the work at the monastery and performed a blessing ceremony for the project, which covers 966 square meters of frescoes.

He visits the site daily to make sure the restored frescoes resemble their original forms.

Speaking about the academy’s work, Guo says: “When we repair frescoes, we stick to the principle of minimum intervention.

“If some parts of the frescoes look vague, we only prevent them from fading away and wouldn’t do any redrawing.”

But he says there are exceptions. “For example, when restoring a deity’s image, we cannot leave it incomplete considering the pilgrims’ emotions.”

Tibetan painters are often invited to ensure accuracy, but people can tell which parts of the image have been restored.

Also, given that the 1.5-meter-thick walls often have uneven surfaces, this poses great challenges to Guo’s team.

Some parts of the frescoes even have 30 centimeters of bulges. Here, they try to take the painted section off the wall and paste it back after restoration in a lab.

Though the main project has recently been completed, Guo says it will take months of monitoring to see how successful it has been. He also says the restoration project is a good way to develop local expertise.

For instance, in 2013, 15 trainees from Tibet were sponsored by Pritzker Family from the United States to hone their restoration techniques at Guo’s academy and other top institutions in Beijing.

In a related development, Ngakwang Chozen says the monastery is considering illuminating the area and making it a prayer passage again as it was the case before it was covered up during the monastery’s expansion in the 18th century.

Going further, he says: “No matter how delicate the frescoes are, their significance can only be enhanced when they are worshipped.”

More to be done

According to Liu Yuzhu, the director of the State Administration of Cultural Heritage, who spoke at a conference in Lhasa recently, the central government’s financial support for cultural heritage protection in Tibet has been greatly increased in recent years.

Between 2011 and 2015, 17 provinces and municipalities in China began programs to help preserve cultural relics in Tibet. In total, 130 projects were launched, with 20 still ongoing.

“The cultural relics in Tibet not only reflect the history and social development of the region but also its emotional connection with the rest of the country,” says Liu.

“The protection and utilisation of cultural relics can be improved through conservation projects. And more job opportunities in the cultural and tourism sectors can be created,” he adds.

Giving details of future plans, Liu says more conservation projects－including the restoration of 77 historical sites and the upgrading or construction of nine public museums－besides archaeological work will be taken up within the next five years.

And, he says, the administration will stage a series of Tibetan cultural relic exhibitions in France, Italy and South Korea, among other countries, during this period.

Tibet: View from the roof of the world

Tibet after the Dalai Lama