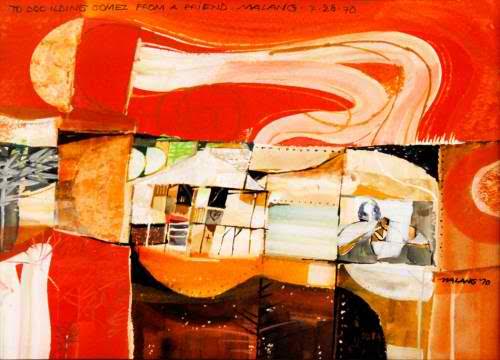 The auction yielded an impressive turnout, according to Jaime Ponce de León.

“The online auction is a way for people to understand the local art scene better as they begin their foray to an impressive roster of art pieces,” the León Gallery director said.

This online platform has less number of lots, compared to León ‘s quarterly auctions which have an average of 200 lots.

His other work on auction, “Sabel,” was bought for 216,080. It was s a digital print reproduction on archival paper of an original artwork. Also an important piece was National Artist Hernando R. Ocampo’s 1973 untitled work, a watercolor on paper, which fetched P210,240. Meanwhile, National Artist Arturo Luz’s metal sculpture was bought for P151,840.

Danilo Dalena’s 1989 etching “Sawa-Sawa at Sanga-Sangang Diwa ng Edsa” made an impressive showing for print works and was sold for P175,200.

Jim Orencio’s 2009 acrylic and collage on canvas “Yaya” was bidded out successfully for P64,240.

Also noteworthy was the successful bidding for Ricarte Puruganan’s oil-on-wood “Entropy,” which sold for for P81,760.

Meanwhile, another early 20th-century work, the Mexican/Spanish Table, had a final hammer price of P280,320.