Harry Potter and son are on center stage in scriptbook from J.K. Rowling and company | Inquirer Lifestyle ❮ ❯ 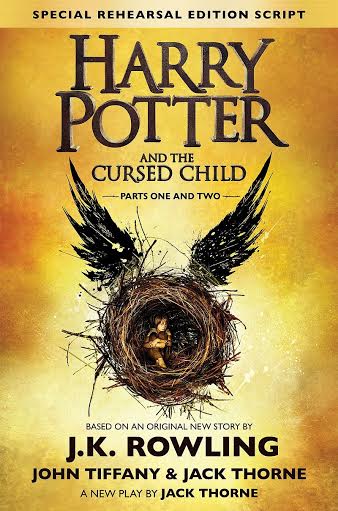 THE COVER of "Harry Potter and the Cursed Child"

Harry Potter and son are on center stage in scriptbook from J.K. Rowling and company

“PEOPLE always look when the three of you are together. And apart. People always look at you,” Ginny Weasley says very early in “Harry Potter and the Cursed Child: Parts One and Two Special Rehearsal Edition Script” (Scholastic, New York, 2016, 328 pages). She is referring, of course, to the three heroes of J.K. Rowling’s “Harry Potter” books—Potter, Hermione Granger and Ron Weasley.

This has always been the case, as proven by the seven novels (with more than 400 million copies sold) and the eight movies based on the books. It has been whomping 19 years since “Harry Potter and the Sorcerer’s Stone” started the series in 1997 and nine years since the last book in the series, 2007’s “Harry Potter and the Deathly Hallows.” Potterheads have been waiting a long time for “The Cursed Child,” hands down, the year’s most anticipated release.

Readers clearly agree with Ginny’s observation. Millions of copies of the book were sold in the first days of its release. But like many things Rowling does, the new Harry Potter book isn’t quite what you expect.

For one thing, it’s actually a play. The plot itself is by Rowling with dramatist Jack Thorne and director John Tiffany, debuting at the Palace Theatre in London last July 30 to critical acclaim and sell-outs. Thorne is the one who wrote the play itself, and his work is what you’ll mostly experience with “The Cursed Child” book.

In many ways, the readers will feel like they’re crashing the Hogwarts School of Witchcraft and Wizardy alumni homecoming. Set 19 years after the end of the series in “Deathly Hallows,” Harry Potter is now head of Magical Law Enforcement. Hermione is Minister of Magic while Ron runs the Weasleys’ Wizard Wheezes shop. Harry has three children, and “The Cursed Child” opens with Harry’s son Albus Severus Potter about to take the Hogwarts Express for his entrance into the magic school.

But Harry struggles with the burden of being a father—yes, The Boy Who Lived is now the Man with Kids. Albus can’t seem to come to terms with being the son of Harry Potter. Things begin to take a turn for the unexpected when Albus is sorted into Slytherin, where he quickly becomes best friends with the amiable Scorpius Malfoy, yes, the son of Draco.

It really is impossible to go on any further without disclosing dramatic twists to the plot, but suffice to say people aren’t happy with the duo’s being friends, and soon, events get out of hand. Albus and Scorpius are determined to do something to change things and that soon leads to one unthinkable problem after another.

Meanwhile, Harry does all he can to somehow get to his son. “I didn’t choose, you know that? I didn’t choose to be his son,” Albus says.

Along the way, “The Cursed Child” examines the marriages of the original characters as well as remembering the important events throughout Harry’s life. This grown-up take on the Hogwarts trio is insightful, a further expansion of the much-debated epilogue of “Deathly Hallows.” Readers will see old friends again, even as they meet interesting new characters. Harry’s experience as a father proves he can make mistakes, that not everything can be solved by being a powerful wizard.

But “Cursed Child’s” most winning addition is the friendship between the thoughtful Albus and the loyal Scorpius. The two’s hijinks prove inventive and engaging, making “The Cursed Child” hard to put down.

The format, while probably new to many readers, actually adds to the reading experience. It compels readers to imagine the scenes in their own heads, while the authors add just enough stage directions to be clear about what’s happening.

Yes, it is tempting to imagine the wonder of what “The Cursed Child” would be as a fleshed-out novel from Rowling like the books that came before it. The book’s single weakest element is that it doesn’t have Rowling’s wickedly whimsical prose, or that there are relatively few additions to the Rowling’s Wizarding World, per se. But this is the best we’re going to get, so savor it. The format should make “The Cursed Child” a little easier to adapt into a full-fledged motion picture. Well, a Potterhead can dream.

This is the best time to be a Potterhead, of course. Aside from “The Cursed Child’s” West End success story, the entire seven-book novel series is being issued in a handsome illustrated edition with art by Jim Kay. Rowling’s Pottermore website continues to churn out Harry Potter minutiae. There are four Harry Potter Wizarding World theme parks.

This November “Fantastic Beasts and Where to Find Them”—based on another Rowling Hogwarts side project—apparates into theaters; Warner Bros. has announced that it will have a sequel in 2018.

Perhaps “The Cursed Child’s” greatest significance is that it is the definitive conclusion. “Harry is done now,” Rowling famously said of the play. So “Harry Potter and the Cursed Child Parts One and Two” really is the final chapter to the Harry Potter story. Crack it open, raise a mug of Butterbeer to Harry—and enjoy the magic one last time.

“Harry Potter and the Cursed Child: Parts One and Two” is available in hardcover from National Book Store.