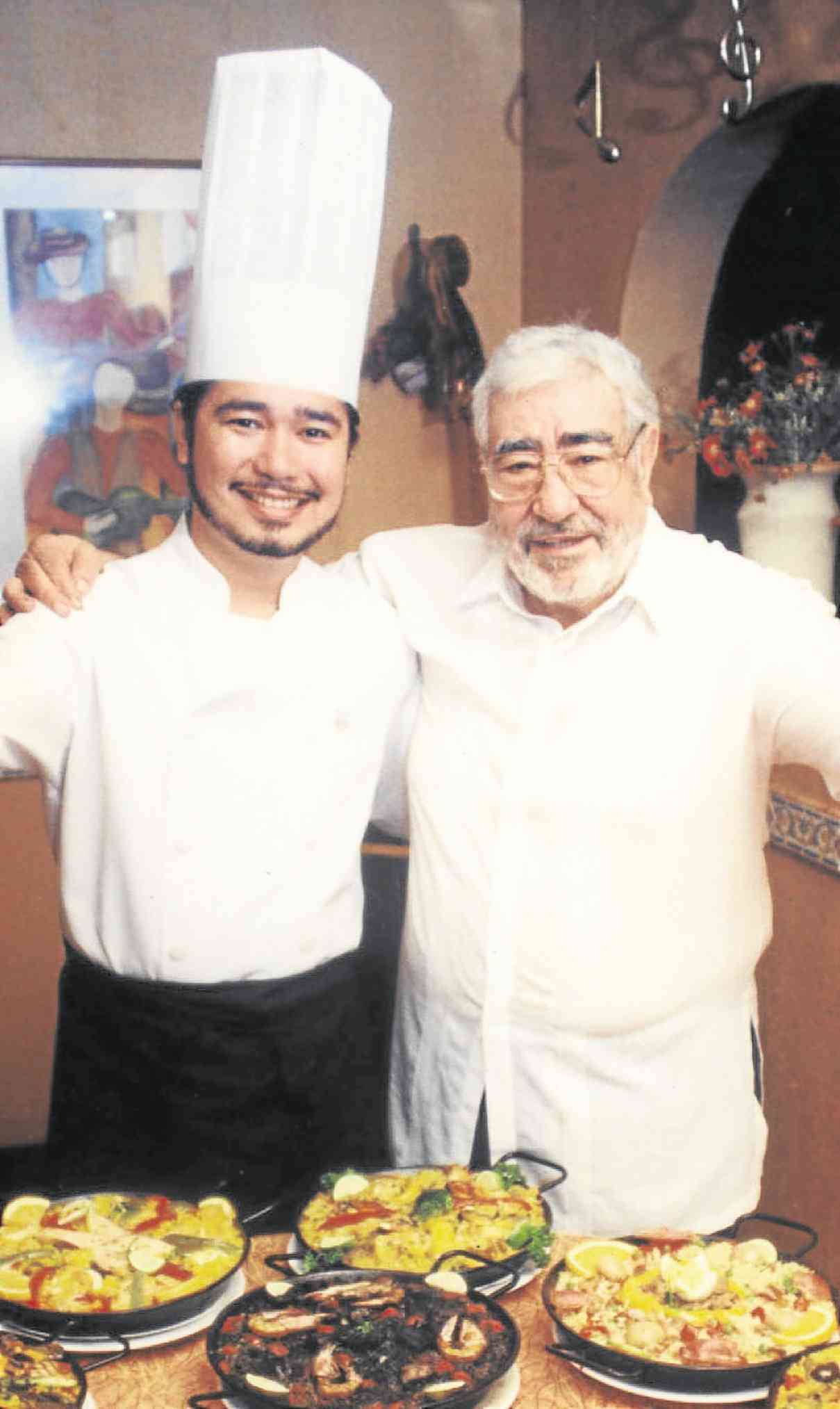 We were in the middle of planning a cooking event that would pay tribute to you—The Don Alba Paella Competition—when early morning a call came from your son, chef Miguel de Alba. He was sobbing.

There was no need to tell me why—you’re gone. You died 14 days before your 90th birthday! You didn’t wait.
The past few months I had been wanting to visit you in your home where you were being cared for by Miguel, his wife, Cachelle, and your grandaughter, Maya. But deep inside me I really didn’t want that visit and see you in bed—old, helpless, not speaking much, not remembering much, could not sit so well, could not stay in your wheelchair for too long.

It would be uncomfortable for you, but more for me seeing you that way. Somehow, your passing became your freedom from your condition and old age.

You had a beautiful death—in your sleep, peaceful, no struggle if at all, quietly into the night.

It was a gift to die this way; you were blessed.

My fondest memory of you was when we launched “The Alba Book” in December 2012 in the newest Alba branch then at The Prism, Mall of Asia.
The mood was celebration, flamenco, paella, cochinillo, lengua, callos and sangria. Close friends like Chona Trinidad mingled with the Spanish-speaking community and with the rest of us “nosebleeds” (my grade at UP was a struggling 3.5 to pass Spanish 101).

And there you were, Don Anastacio de Alba, The King of Paella, also known among your colleagues and the palengke folk as
“Kulas,” the chef who brought Spanish cuisine to our foodscape, made it an inherent part of our cuisine, and infused it into mainstream Filipino party fare.

No wonder, no less than the King of Spain Juan Carlos I bestowed you one of the highest honors given its citizens, for promoting your mother cuisine—the Order of the Cross of Isabela (La Cruz de official dela order de Isabela Catolica). You were painfully shy that night, not really wanting so much adulation.

You always seemed uneasy being the center of attention. I guess it stemmed from being a man of service, used to staying behind the scene, at the back of the kitchen, cooking for others and serving others—that’s you!

But how could people resist your charms? You who were so romantico, guapo, with a built-in sense of humor (not put-on), who knew how to laugh at yourself, full of stories for all ages and classes.

I bet many didn’t know that you had more talents than we could imagine. You wrote poetry and song, danced with grace and sexiness, and you were also into theater, acting in some Spanish plays staged here.

And do you remember, sometime in April 2005, having a paella cooking session for COOK magazine and my TV show “The Practical Cook”? It was with an HRIM Class of St. Benilde, with instructor chef Bambi Lichauco. Before you started to teach them your paella tricks, you asked to sit them down for “sermon muna…”

Your words were “Work hard, work well, always learn. Stay in the stage of learning if you want to be a good teacher. Live life well. LOVE and be loved.”

I remember you spoke about the old times when this country was still very rich and cooks would use only the prime cuts of chicken. And then, what you added made me laugh out loud: “But these days, even the puwit of the chicken is cooked! So let’s not waste things when we start to cook.”

Life was your stage. How easy it was for you to fit into other people’s lives—young and old, rich and poor, nice and naughty. I wonder, did you ever have secret loves, or just secret recipes? Why was your poem about fate and the end? What made you sad? Who made you happy? Who were your loves?

On the first night of your wake, your son Paolo shared about how he had a fight with you and he punched the TV and walked out of the house, angry! In a few minutes, Paolo’s mobile phone was ringing. It was you, saying sorry to your son.

On many occasions, your youngest, chef Miguel (whom his sibs named The Prince of Paella, who was also responsible for reviving the Alba businesses that almost sank into oblivion), would have discussions with you about how to cook certain dishes and also how to run the business, leading to loud arguments. But you would always give him rightful space and freedom in the Alba kitchen.

Even I was lucky enough to have had you as critic when it came to choosing a boyfriend. You gave your thumbs up or thumbs down (mostly thumbs down) when I introduced them to you, and you were gentlemanly enough to explain to me the reasons you think this man was not good for me (“palikero,” for instance). And I’d always say, “It takes one to know one!”

I miss you already.