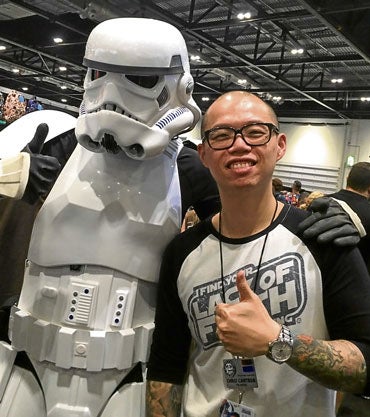 “Star Wars Celebration” gathers the film franchise’s fans from everywhere, so it shouldn’t be surprising that there is a Filipino presence here, as well.

Chris Cantada, the 31-year-old YouTube personality (chriscantadaforce.tv), makes it a point to attend every year, usually in his Stormtrooper costume.

That’s because Cantada is part of the Pinoy 501st, the Philippine branch of the international costuming group the 501st Legion. You have probably seen them in full Imperial costume at events, taking their roles seriously.

This is Cantada’s fifth Celebration, having attended the Japan, Orlando and LA editions. He skipped last year because he was busy getting married.

“‘Star Wars’ is my first cosplay experience,” he said. “Part of the experience is lining up just to get inside. You meet a lot of people whom you stay in contact with.”

Though he has attended with other Filipinos in the past, Cantada said he usually comes alone.

Being a member of the international 501st community means he’s never really by his lonesome, though. “When you are a 501st member, you’re welcome to any ‘Star Wars’ gathering. There are 501st groups in many countries, and when you visit a country, they welcome you.”

This year is the second time he’s attending without bringing his costume. “I wanted to enjoy being here as a civilian,” he explained.

Attending the Celebration every year is no easy feat on both the pocket and the body. “You have to plan and budget, get promo flights, use Airbnb,” he said. “You know you’re going to spend a lot.”

Cantada is proud of what the 501st does and stands for: “When you wear the suit, it’s everything.” He has both the original and the Force Awakens Stormtrooper costumes.

“The new one is Philippine-made,” he revealed. “There are a lot of really talented artists and sculptors back home who join the 501st.”

And though you must dress up as the bad guy as a member of the 501st (that’s right, no Jedis or rebels), they are good guys contributing to good causes.

“We never charge for our appearances, though we accept donations for charities we choose,” he said. “That’s the whole idea behind the 501st.”