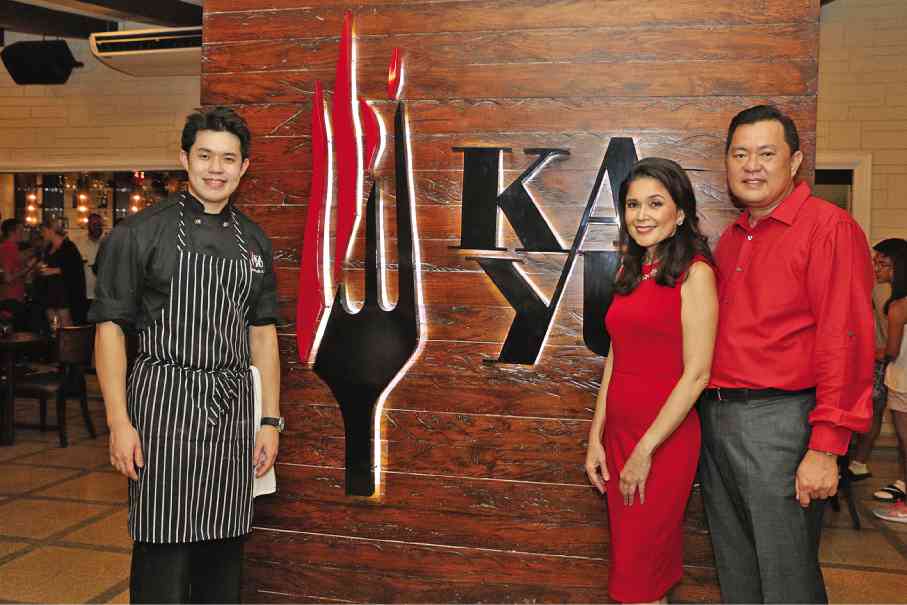 CEBU’S dining landscape has changed tremendously, and we, like most food lovers nowadays, couldn’t be more pleased.

It’s almost hard to believe that Cebu now is the same city we grew up in, where there was only a handful of restaurants around because “Cebuanos always go home for lunch,” or so businessmen were told.

We can credit Jason Hyatt as one of the restaurateurs who started the food revolution here 10 years ago.

When he opened Abaca restaurant, he was told he wouldn’t last more than six months. Not only has he lasted, but also the dining scene in Cebu has thrived, with various restaurant groups growing, including the Urbinas’ Laguna Group, the Dytians’ Creative Cuisine Gourmet Group, and power restaurant couple Marco and Kate Anzani and their Anzani Group of Restaurants.

Most recently, the entry of British Michelin-star chef Jason Atherton with The Pig & Palm has put Cebu on the world map.

The latest chef to bring something bold and new to Cebu is 26-year-old Francis “Izzy” Sy with his modern fusion restaurant, KAYU: Kitchen+Bar, at 32 Sanson by Rockwell Land.

Kayu, which is Cebuano for “fire” or “passion,” is Izzy’s playground for fun, experimental and inventive dishes.

The Cebuano-born and -bred son of Francis Sy and Marisse Alvarez-Sy grew up surrounded by good food.

His late grandparents, Luis and Merceditas Alvarez, founded Montebello Villa Hotel in the ’70s and Costabella Beach Resort in Mactan in the ’80s, and he fondly remembers his grandmother’s cooking during Sunday gatherings.

“I grew up eating Spanish food,” he reminisces, “My grandmother would cook Spanish staples like paella, lengua, callos, and fabada, and she passed on her recipes to my mom, who got her love for cooking from her. My mom’s cooking inspires me to this day.”
When we ask Marisse if Izzy has always been into cooking, she laughs and replies, “No, but he was always into eating.”

Izzy studied entrepreneurial management at University of Asia and the Pacific in Manila and came back to Cebu after a year. He studied at University of San Carlos in Cebu, but “we could tell he wasn’t happy. It wasn’t until he enrolled at International Culinary Arts Academy of Cebu (ICAAC) that he seemed to find what he wanted to do.”

“At first, I wanted to be a musician,” Izzy recalls. “I used to play lead guitar in a heavy metal band with friends in Manila, but what really made me change my mind was when I started studying at ICAAC. I was making things I never thought I could. I wasn’t even thinking of opening a restaurant, but what I learned was something I could share with my family.
“Knowing I can make people happy with food is a good enough reason for me to do what I do now.

“I was supposed to study at Le Cordon Bleu in Los Angeles, but chef Jeremy Young, the dean of ICAAC, convinced my parents that I should study at the Culinary Institute of America (CIA).”

Izzy took the two-year associate’s degree program at CIA in Napa Valley, California, and did his internship at the innovative Morimoto restaurant of iron chef Masaharu Morimoto, also in Napa Valley.

“It’s funny because I didn’t want to work at Morimoto. I thought it was way out of my league,” he declares. “I was planning to do my internship in a steakhouse in Las Vegas. It was my father who pushed me to send my resumé to Morimoto. I told him, ‘Pa, they wouldn’t hire me. I haven’t even graduated from school yet.’ Still, my dad convinced me. Then after a couple of days, I think it was meant to be because only Morimoto Napa responded to my e-mail. It was almost too good to be true.”

While the iron chef would visit only every three months or so, Izzy credits Morimoto Napa’s executive chef at that time, chef Kang Kuan, for having taught him a lot of what he knows.
After working at Morimoto Napa for two years, and the casual Kitchen Door at Oxbow Public Market in downtown Napa, Izzy decided to come home to Cebu.

Everything fell into place when he heard that Rockwell Land was looking for someone to open a restaurant in their old staff house.

KAYU was six months in the making, from construction to opening, as was his mother’s bakery, Marisse Patisserie, which is right across his restaurant.

“Biases aside, I love my mom’s place. Every day, I get to eat my favorite sandwiches as well as her guava cheesecake bars,” he declares.

“A lot of people see chefs as people who just cook good food,” Izzy says. “I see this profession not just as a job, nor is it just about feeding people. Chefs nowadays are also part-time butchers, accountants, HR managers, mechanics, etc. It’s the joy and happiness that you give to others. I don’t just cook to fill people’s bellies; I cook to make memories.”
KAYU: Kitchen + Bar is located at 32 Sanson Road, Lahug, Cebu City. They are open Tuesday to Sunday for lunch from 11:30 a.m. to 2:30 p.m., and dinner from 5:30 p.m. to 10:00 p.m. For inquiries and reservations, call (32) 5165842.