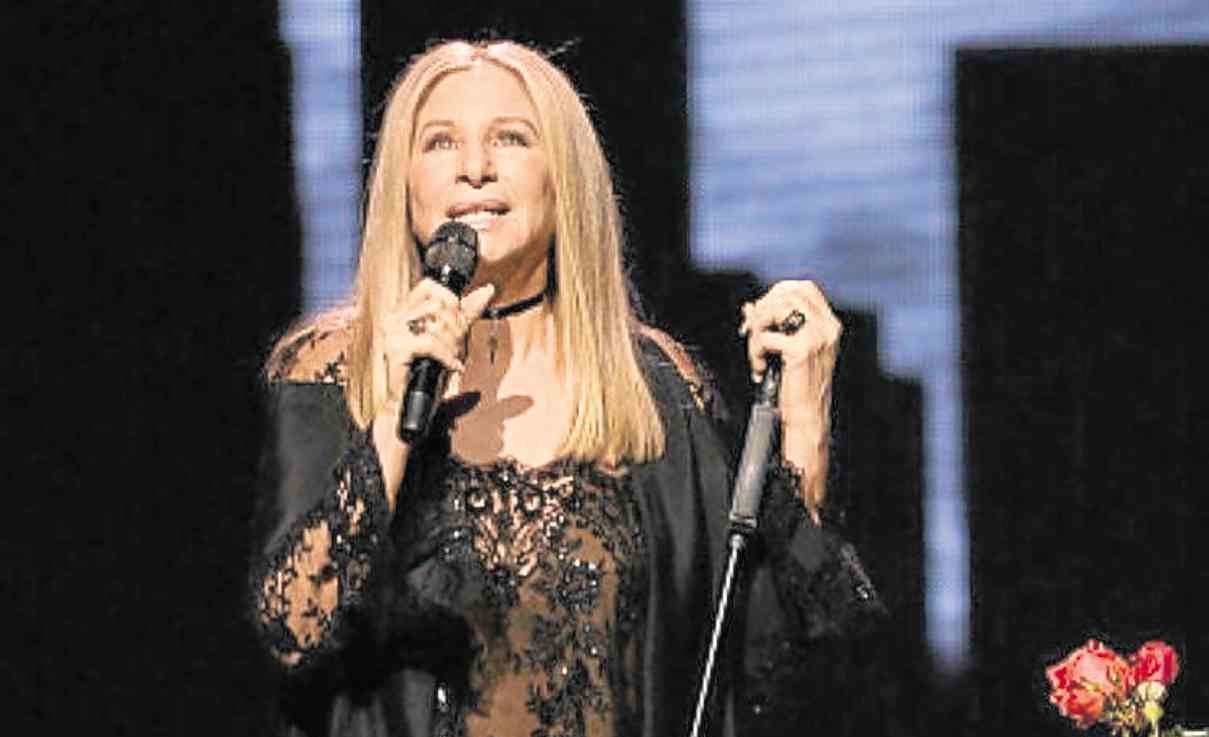 STREISAND at the concert PHOTO FROM STREISAND’S FACEBOOK PAGE

Finally, there in front of me–Barbra Streisand!

I HAVE always been a Barbra Streisand fan, since second year high school. Blame it on dear friend Ino Manalo, who was a high school buddy.

In those years, it was either you were a “Streisand” or a “Warwick.” Don’t get me wrong, I love Dionne. My dad had her records, and to date I have kept them up on my shelves.

But I adore Streisand. She, to me, is the epitome of artistic perfection. I collected her records. A friend gave me one of her earlier records, “Stoney End,” as a gift on my birthday, 20 years or so after it was released. He scavenged in Raon where one found old records then. That was a precious gift.

I also collect DVDs of her concerts, and even had a Barbra Streisand dinner with my family, flashing the “One Voice” concert she held in her garden while I hosted dinner in my own rooftop garden.
Streisand’s concerts are always so rare that, when they do come along, the excitement that comes with the anticipation is electrifying. In 1994, Streisand once again set foot on stage and kicked off her world tour concert after a 27-year hiatus.

My wish to watch a Barbra Streisand concert began here, but obviously it remained a dream. The concert tour sold out within the first hour of sale and set a record of over 5 million for TicketMaster.

Another concert tour followed in the fall of 2006; once again, it broke house records in 14 of the 16 venues she performed in.

In 2012, another record was set in her European tour, which was preceded by her North American tour that was kicked off by her “Back to Brooklyn” performances, a return to her home borough.

Over 20 years had passed, and my hopes and dreams remained as such until the third week of May, when I read that Streisand was going to have another concert tour to precede the release of her third and final series of Broadway albums, “Encore.”

This new album has duets with movie stars who can sing. Slowly, the clips of the recorded materials have been released on YouTube.

The exciting build-up to her concert was now getting to me. I wrote about it, posted news, shared blogs and official updates. She would kick off her concert in Aug. 2; I was weighing going to Los Angeles for it. I thought this might be my last chance; after all, Barbra is already 74 and even if she could do more concerts, her voice may already be compromised.

Friends on Facebook prodded me on. Family urged me. Yet I was convinced that having her CD would give me enough contentment.
May 19 was another regular day. I was on the phone with my sister Cherry, and I noticed some anxiety in her voice. She said, “Have you read Christmas’ private message to you?”

I said no. Why should I receive a message from my sister’s best friend based in LA whom I haven’t seen for over three decades? Christmas de Leon, married to Almond Abellanosa for over 30 years now, was no more than my youngest sister’s best friend who was a permanent fixture in our home in Balagtas, Pasay City. Like all bunso and their friends, she was the baby in our family.

Christmas is my Facebook friend, and I didn’t realize she had been silently catching up on the family through my updates. Of course, by now my FB page was all filled with Barbra updates and my wish to go to LA.

On FB I was greeted with a message that seemed so surreal—“Join us on Tuesday, Aug. 2nd at Staples Center for the Barbra Streisand Concert. I have a ticket already for you (floor!) with your name on it. Just get yourself here to LA!”

I was stunned and overwhelmed. We both then realized that day would be my mom’s eighth death anniversary.

After a 20-hour trip, I arrived in San Francisco and met up with friends of my post-teen years. It had been 30 years since I last saw them. I spent four days with Tony, Sandy, Manolo and even Angie, who flew in from Utah to be with us.

Next and final stop—LA. The Abellanosa couple and the De Leon family welcomed me with so much warmth and sincerity. Christmas and her husband Almond booked me in a very comfortable hotel, prepared a personalized toiletry kit and got us on a gastronomic itinerary.

The concert date was Aug. 2, 8 p.m., Christmas, Almond and I had our pre-concert cocktails at the Marriott just across the Staples Center. Christmas’ mom, Tita Mylah, was dressed to the nines in black and glitter, coiffed and made up. Milkah, the eldest of four, was elegantly dressed in purple, and the ever low-key Christmas was in black.

As the four of us made our turn, I saw the big sign—Staples Center, and the giant LED billboard for the sold-out concert. This was for real! I took a deep breath, a moment’s sigh to thank God for gifting me with this beautiful present. Gate 14—there it was, the entrance that led to our seats.

It was 8 p.m. There were no signs the concert was to begin. Then at 8:20 p.m., the houselights abruptly dimmed, and the stage lights came on. “Ladies and gentlemen, Barbra Streisand!”

At that moment I stared straight smack at the center of the stage to capture the first few seconds that I was seeing live the woman I had idolized, next to my mom, all these years.
There she was, live as live could be, in black sequined loose top and pants. The arena was in a frenzy. I was on my feet, jumping, stomping, screaming, “I love you Barbra!”

She told the crowd, “Thank you, thank you,” but the cheers only became louder. Then the first strains of a familiar tune played; she began to sing: “Mem’ries light the corners of my mind…”

Now everyone was in a hush. How appropriate for her to open the evening with one of her iconic songs, “The Way We Were.”

High notes
It was a performance like no other. Her voice may have become slightly huskier, but it was the mature sound of a career well spent. She still maintained her crystalline wide range and hit her famous high notes.
In the two-and-a-half-hour concert, the audience gave a standing ovation almost after every song.

Kenny “Babyface” Edmonds joined her in a hauntingly beautiful duet of “Evergreen.”
Later, she sang “Climb Every Mountain” with Jamie Foxx, and “Pure Imagination” with Seth MacFarlane.
She ended the first half of the evening by lighting a candle, then singing “Papa, Can You Hear Me?”

Earlier that evening, Christmas had told me that if Barbra sang that song, she’d lose it all, and she did. Christmas lost her father in her early teen years back in Manila, and the family grew up on the strength and fortitude of their family matriarch.
The mom, Tita Mylah, was a respected writer in Manila; after battling cancer 10 years ago, she continued writing for the local Filipino community newspaper in LA.

The concert ended with Barbra’s signature songs “People” and “Happy Days Are Here Again.”
By then my throat was all croaky and dried up from my endless shouts of “Bravo!” and “I Love You Barbra.” For a moment there, I thought she answered me directly when she replied “Oh, thank you!” to my “I love you Barbra!”

The ovation in the end merited one more return for a final bow. She exited and the house lights went on. Every face in the venue was smiling.
I took my time leaving the arena; I didn’t care if I would be the last person to leave the place. I wanted to savor it all.

As I was queueing up in the lobby for souvenir items, I overheard a couple talking. The wife told her impatient husband, “This is what fans do, they patiently wait in line.”
I glanced at them with a smile. They told me they had driven two hours to get to the concert. I told them I had travelled 19 hours by plane! They were shocked, and exclaimed, “Now that is a real fan!”

On my flight back to Manila, I leaned back to reflect on what had transpired while humming “People.” My eyes swelled with tears with profound gratitude for friends who made this all happen.

Truly, how lucky and blessed we are to have true people in our lives. My cup runneth over.

Miguel A Miñana is the president of his events company, ThemeWorks Events.