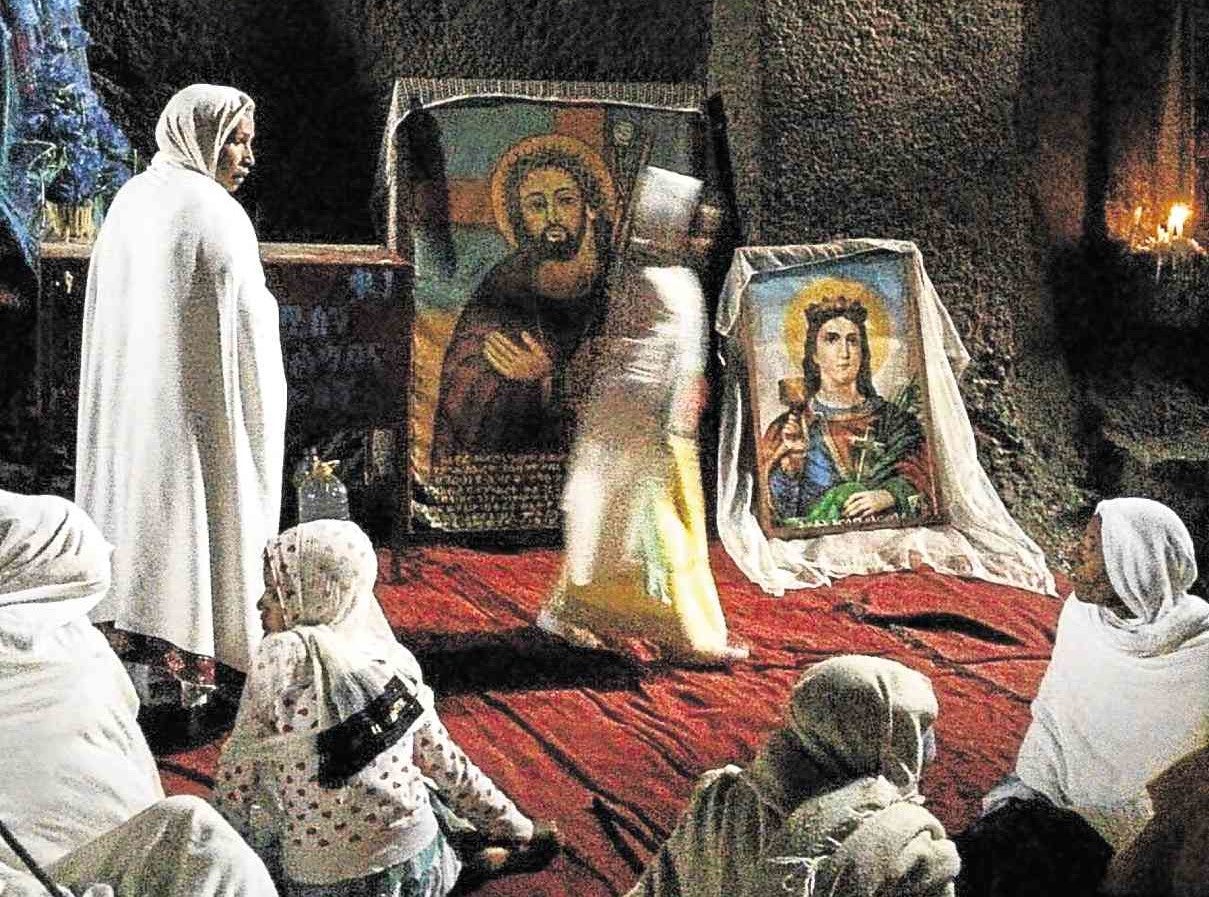 INSIDE the House of the Holy Savior; women praying to the icon of the Madonna PHOTOS BY LITO B. ZULUETA

LALIBELA, Ethiopia—Filipino Catholics who have resolved to visit the Holy Land at least once in their lifetime but are discouraged by the tinderbox situation in the Middle East may have found the next best option in this ancient mountain town in northern Ethiopia.

So impressive are the churches that they have been called by travel operators not without some bases as the “Eighth Wonder of the World.”

But for devout Orthodox Ethiopians, Lalibela is nothing less than the “Second Jerusalem” and even the “New Jerusalem,” the 800-year-old churches carved out of its red mountain rocks constituting the fortress of the ancient Christian faith, a veritable “Rock of Ages.”

In fact, the churches were built on orders of King Lalibela at the turn of the 13th century as an alternative Holy Land.

Because of the Muslim occupation of Palestine and the counter-offensive of Christian Europe’s Crusades, Christians from Asia Minor and Africa found the traditional trek to the Holy Land and its sacred sites daunting.

With 40,000 people laboring across two dozen years, 11 churches were built on living rock of monolithic and, semi-monolithic blocks as well as caves. These blocks were then further hewn and chiseled, forming doors, windows, columns, floors, roofs and Christian icons.

This complex, sprawling and ambitious work was complemented by a system of drainage ditches, trenches and tunnels opening out to hermit caves and catacombs. Lalibela named them after key Christian sites in the Holy Land.

The 11th and last church to be built was separated from the rest and was strikingly cruciform in shape.

Lalibela had planned to name it after himself until he saw in a dream St. George, asking, “But where’s my house?” He then named the church after the saint beloved to Ethiopians.

In inscribing them in the World Heritage List, Unesco has cited the rock-hewn churches of Lalibela for their “outstanding universal value,” especially since they have continued to be a “high place” of devotion and pilgrimage for Ethiopian Christianity. They are sterling examples of “living heritage.”

Oldest in the world

Ethiopia is one of the world’s oldest civilizations, and the Ethiopian Orthodox Church is perhaps the oldest in the Christian world.

Even before Christianity, Ethiopia had practiced Judaism as a result of the marriage of King Solomon of Jerusalem and Queen Sheba of Ethiopia, a familiar episode in the Old Testament.

But according to Ethiopian sources, Sheba later returned to Ethiopia, while her son Menelik went to Israel and came back with Israelites and the Ark of the Covenant.

Today Ethiopia is home to the Beta Israels Falasha or the “Black Jews.”

The Jewish legacy explains the national Ethiopian symbol—the lion—not referring to the African lion but to the Lion of Judah in the Old Testament. It also explains why the most sacred place accorded in an Ethiopian Orthodox Church is behind the altar where the Ark of the Covenant (or its replica) is lodged.

It was also through Ethiopia’s Jewish heritage that Ethiopians were introduced to Christianity.

In the Acts of the Apostles, VIII: 26-40, a court eunuch sent to Jerusalem by Queen Candace of Ethiopia to worship the God of Israel met Philip the Deacon and was baptized by him. Ethiopian tradition said that he returned home and evangelized the people.

In his Homily on Pentecost, St. John Chrysostom said that Ethiopians were present in Jerusalem on Pentecost and that the apostle Matthew was assigned the task to spread the gospel to Ethiopia.

Ethiopian monarchs had since then been priestly kings who considered it their sacred duty to promote and protect Christianity and the Orthodox church.

It is also perhaps its strict history of monotheism that has allowed Ethiopia to consolidate its identity and protect its territory and people from colonial depredation, save for the brief interlude between 1936 and 1941 when Benito Mussolini and the Italians invaded and tried to occupy it.

At the Church of the Holy Savior, the journalists found pilgrims flocking to the church despite the rainy season to make it inside in time for daily noon Mass.

Once the Mass started, latecomers would no longer be allowed inside even when there was space, so they had to do all the ritual ejaculation and prostration—even the obligatory kneeling during consecration (no, just merely standing when the Host is raised as lax Catholics mindlessly do is not allowed in the Orthodox faith)—outside on the mud.

It was a particularly devotional time for Orthodox Christians as they were celebrating the Feast of the Assumption of Mary. Unlike in the Catholic observance when the feast is celebrated in just one day, Orthodox Ethiopians mark it as a whole season of prayer and fasting, the latter enforced every day, so that Orthodox Christians, even children, must abstain from meat (fish and fowl included) till 3 p.m., daily.

Before entering, the media men removed their shoes like the pilgrims because they were on hallowed ground. Inside, they found the faithful separated according to sexes—the women on the right and the men on the left. An eager group of young girls who followed the media group to the men’s side were gently admonished by the guide, also Orthodox, that they should not be there.

At the Mariam, women huddled in front of murals of the Madonna. The church was said to be the favorite of King Lalibela and it showed in the huge crosses and ornate icons exquisitely carved out of the monolith.

At the Church of St. George, Philippine journalists marveled at the cruciform roof jutting out of the deep trench that surrounded the monolith, which rose some two dozen meters high.

Inside, a monk sat before the altar praying. When the guide knelt before him and asked for his blessing, the monk raised the richly ornate traditional Orthodox cross and brought its four ends to the guide’s lips, the faithful’s unction joined to the Crucifixion.

Moved by the sight, the journalists followed in the guide’s wake and, ignoring the chasm—nay, the schism—between Latin and Orthodox Christianity, knelt before the monk for a similar blessing. They joined their lips to the points of the Cross and at once they relived the freshness and vigor of the ancient faith, still burning like the fire of the first Pentecost 2,000 years ago.

Ethiopian Airlines flies to Addis Ababa from Manila with a brief stopover in Bangkok three times a week. To celebrate the launch of its Dreamliner service to Manila, Ethiopian Airlines offers special roundtrip prices of $787 (economy) and $1,787 (business).