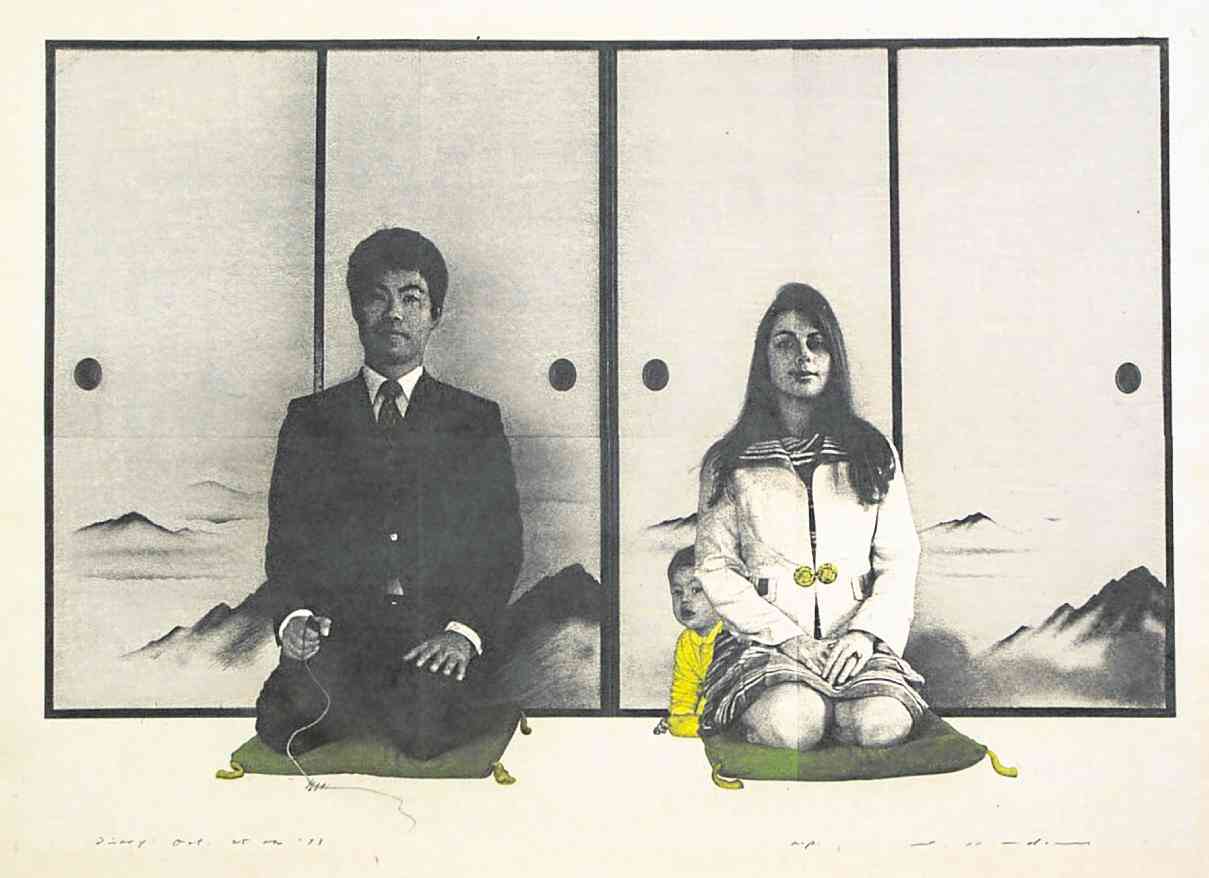 TETSUYA Noda, considered by some as “the best printmaker in contemporary Japan,” unwittingly created in the 1960s the counterpart of today’s social-media sites like Facebook and Instagram. Gallery-goers can now view some of his works exhibited for the first time in the country at Ayala Museum in Makati.

“The Diary of Tetsuya Noda: Steven Co Collection” opened July 25 to commemorate the 60th anniversary of Philippines-Japan Friendship Month. Mounted under Ayala Museum’s exhibition program Collectors Series, through a grant from the Exhibitions Abroad Support Program awarded by Japan Foundation, it runs until Aug. 28 in the museum’s third-floor exhibition hall.

Noda says the number of editions for each print depends on its size, or the commission’s requirement. A small print has an average of 100 copies; a large one, five. In 50 years of art-making, he has produced over 500 artworks.

“In tribute to his age,” says Co. “I always believe a number has to mean something.”

The collector, who has over Noda 100 pieces, met the artist for the first time at the exhibit opening.

Noda describes Co as “a very special man. I don’t know why he collected my works.”

Co has been based in Hong Kong for 20 years now, working as a senior manager for corporate development. He comes home to Manila once a month for the weekend.

A University of the Philippines graduate, he says he is more into classical music, as critic and composer, than the visual arts. He studied curatorship at Metropolitan Museum of Manila and tour guiding at the Coconut Palace, where he saw artworks scattered about.

“You see an Orlina sculpture on a table, not in a museum, and it makes you think art is part of everyday life,” he says.

Though he may be known for his Noda prints, Co says his primary collection is still Philippine art, particularly works of emerging artists such as Daniel Aligpain and Art Sanchez. He collects works of eight artists, three of them Japanese.

“Ang mahal na nila,” he says smilingly. “They’re already unreachable. In collecting, economics is always there, what I can afford. Thanks to the depreciation of the yen, I have these many Noda pieces.

“I’m attracted to his concept of visual autobiography, the record of memory. Apart from just technique, there’s unity of purpose, intent. When collecting artworks, you consider both form and content. You collect the art, not the personality. If the artist turns out to be interesting or to your liking, that’s only the bonus.”

It started with his fascination with ukiyo-e, the traditional Japanese woodcut print that influenced major European artists in the late 19th century from Van Gogh to the Impressionists. It was while following its progress through the years that he discovered Noda in an auction catalogue, a lithograph of a crumpled paper bag, a ukiyo-e using modern technology.

It was his first art acquisition. He has been collecting Noda pieces for five years since, from New York, San Francisco, Chicago, and “a significant portion” from Japan.

For the exhibit, he selected the pieces himself, “not only the rare ones but to have the feel of the whole body of work. I found out the British Museum had exhibited his works; then it must be okay to show them in Ayala Museum.”

Noda started with painting at Tokyo National University of Arts. Among his favorite artists are Jasper Johns and Claes Oldenburg.

“Why I studied painting? I don’t know,” he says. “At that time, if you wanted to be an artist, you studied oil painting.”

But he was dissatisfied with painting nudes as assignment as “it did not seem the right way to express myself.”

During school breaks, they were assigned to take snapshots to compose a picture diary of their summer holidays. Still, he wasn’t satisfied with photography itself.

“So I retouched the photographs with pencil or watercolor in order to get into my own expression,” he recalls. “I didn’t want to lose my sensitivity. If you fish, you can eat the fish directly, including the scales, or you can cook it first according to your taste.”

When he came upon printmaking, he found woodblock to be his favorite. Using a mimeograph cutting machine for the photo image combined with woodblock printmaking techniques, he was soon cited for his “audacious combination of photography with traditional woodblock print,” an innovative technique that won him the Grand Prize at the 1968 Tokyo International Print Biennale.

Robert Flynn Johnson, curator in charge of the Achenbach Foundation for Graphic Arts at the Fine Arts Museum of San Francisco, has declared: “It is Tetsuya Noda who stands as the most original, innovative, and thought-provoking Japanese printmaker of his era.”

Need to keep a diary

Noda is renowned for his series of prints comprising a visual diary, a record of his daily life depicting family and friends, especially his wife and their two children; the kitchen of his parents; sceneries and world events; still lifes of carefully arranged fruits; flowers in a vase; plant in a pot; fish wrapped in plastic sheet; bagels in plastic bag; chopsticks in paper sheath; cigarette butts in ashtray; tomatoes from his garden; tulips sent by a friend.

“Everyone has a need to keep a diary,” he says. “While writing it, you don’t think only for yourself but also for others to read it. You feel it should be shown to the public. It’s the same as on the Internet, like Facebook, YouTube—I’m not saying I’m a pioneer of it.”

He does his prints mostly on Japanese paper (from the mulberry bark or bamboo) as “the new paper is too absorbent, like tissue paper,” so colors bleed into one another. The paper is applied with rabbit-skin glue or alum. He dampens the paper to soften the fibers before applying the woodblock. He still uses the traditional Japanese printmaking tool baren for color gradation.

“I rely on Japanese aesthetic tradition,” he says.

He explicates the concept of ma, or negative space, emptiness, the interval used to emphasize the object, which he applies on his work. “If the imagery is too busy, one cannot see the object.”

His prints, chiefly achromatic, appear to have faded. But he says this is their original color tonality, unlike the old ukiyo-e the brilliant hues of which have truly faded through the years.

He also studied Photoshop, computer printing. He points to his silkscreen image of CNN anchor Anderson Cooper breaking the news of the Jan. 8, 2015, Paris massacre, which he did on the computer and retouched, adding red to the gray monochrome.

Each image tells a story, with the date of occurrence.

A 1973 formal portrait of him and wife Dorit (daughter of the Israeli ambassador to Japan), with son Izaya peeking from behind her, startles and charms for its composition, because “we could not have the little boy sit still and be formally seated.”

The amorphous images of crumpled blanket on the floor are actually two-year-old daughter Rika swaddled while playing a monster.

An image of an ashtray filled with cigarette butts is a record of what his 19-year-old son smoked, the father hoping he would stop smoking when he saw it.

A 1976 high relief of a small pair of pliers was molded from the original to commemorate “our first canned foie gras, brought by a friend; as there was no can opener around, we used pliers instead.”

A 1994 woodcut of a bag of rice, in gray with red Japanese characters, tells of the rice crisis in Japan, which, Noda jests, was caused by the Philippines. After the eruption of Mt. Pinatubo in 1991, ash covered the atmosphere for some time that “there was not enough sunlight for the rice to grow, so we had to import from Thailand.”

In an essay in the exhibit catalogue, Co writes: “In today’s world inundated with social-media sites like Facebook, Twitter, Instagram, Flickr and Tumblr, keeping a visual diary is almost everybody’s business; everybody has a visual autobiography. However, most people are fairly predictable in what they filter to post: birthdays, graduations, food, gatherings, travels, weddings and anniversaries; in my case, my cats. Most are statements, rarely reflections, and mostly just seeing, rarely noticing.

“Noda’s ‘Diary’ series is a visual map of temporal, personal, experiential and lyrical moments. He strives to preserve memory with the objectivity of his camera but disrupts the resulting photograph with the subjectivity of his pencils and brushes before committing the memory to print.”

Last year, Noda received from the Japanese government the Order of the Sacred Treasure.