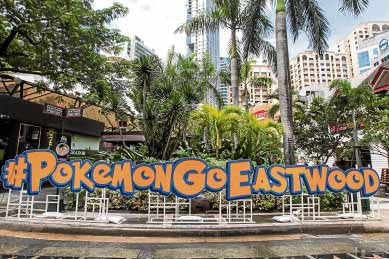 If there’s one word to describe Eastwood City, forget clichés like “posh” or “burgis.” It’s nocturnal.

When the bars open at dusk, call center workers arrive to dine and drink to their hearts’ desire.

Eastwood City is a relatively quiet place when the sun is up, but on a Monday, the small avenues and crossroads of this Megaworld property in Libis, Quezon City, was abuzz with people whose eyes were locked on their phones.

They were playing “Pokémon Go,” the latest mobile app craze. Eastwood City, it turned out, is a hotbed of Pokémon.

For the clueless, you’re in luck because we caught a Bulbasaur and a Squirtle. Charmander was nowhere to be found because he’s a flame-tipped jerk.

There was also a Dodrio, a Magmar, a few Slowpokes, and just too many Pidgeys, Rattatas and Spearows.

Eastwood City is also littered with PokéStops, so you can get your steady supply of Pokéballs, especially at Central Plaza, Open Park and along the Walk of Fame, where we looked for Maine Mendoza’s star because we’re an AlDub fan.

Those Pokéstops are all designed for pedestrians, so players don’t have to watch out for vehicles; they just have to remain vigilant in case a Growlithe appears on the map.

And since “Pokémon Go” is an app that is played on smartphones, security will always be an issue.

But Megaworld makes sure that safety is a priority 24/7. You’ll always feel safe if there are several tall guys keeping an eye out for anything unusual.

A little after lunchtime, we, along with Inquirer photographer Leo Sabangan and Megaworld PR Marist Nagera drove to Bonifacio Global City (BGC), where the sun was shining despite the rainy season.

The sky was bright and the wind was surprisingly strong on that Monday afternoon, but what was even stronger was the urge of BGC residents, and those who work there, to play “Pokémon Go.”

Several groups of people converged at Burgos Circle, and around the funky-looking round tree in the middle, which is a gym, to look for Pokémon.

Gastly appeared, and also Vulpix, which we caught.

Pokéstops are also abundant in the area, with several inside residential areas.

Bellagio Tower 2 has a Pokéstop, the blue mushroom in its swimming pool, and the fountains of Parklane and Forbeswood Heights (BGC residential areas sure have a fondness for fountains).

Doduo and its evolved form, Dodrio, showed up between Forbeswood Heights and Parklane.

If you’re feeling lazy and just want to sit and dine, three restaurants around Burgos Circle are PokéStops—Wrong Ramen, Just Thai and Datang Jardin offer not only scrumptious meals, but also Pokémon.

Just use a Lure Module here, and all you have to do is wait.

Final stop of the Megaworld Pokémon Journey was McKinley Hill, where four Pokémon Gyms can be found.

Venice Piazza, Enderun, McKinley West and Lawton Entrance are all Pokémon gyms, where the supremacy of Team Valor, Team Instinct and Team Mystic are tested.

And if you’re the peaceful trainer, Pokéstops are also scattered around the area, with some around the Grand Canal, the Venice Piazza fountain (what is it with these fountains?), the Woodridge Open Park and World Square.

With several Squirtles and Bulbasaurs in our Pokédex, it’s natural we’d want a Charmander, and McKinley Hill did not disappoint because the fire-breathing Pokémon can be caught there.

Abra can also be found in McKinley Hill, but be quick because those guys will ditch you if you don’t get him in the first try.

All these three locations—McKinley Hill, BGC and Eastwood City—are all prime spots for Pokémon hunting, since they all operate 24/7 and security is always at a premium.

With residents numbering over 50,000 in each area, there will always be a Pokémon Trainer who will put up a Lure Module at the PokéStops, and that will make any player a happy camper.