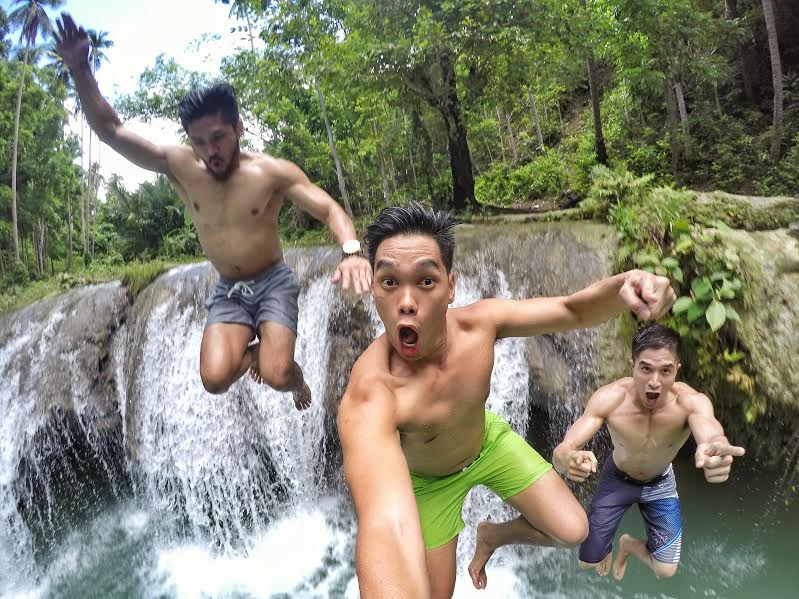 Having heard many good things about the beauty of Siquijor and seeing photos of what it offers, I arranged a trip to the so-called “Island of Black Magic.”

It wasn’t so much about the mystical stories of witchcraft surrounding the island, as an excuse to travel and appreciate the country’s beauty one island at a time, that set us off.

Maldives of the Philippines

Before heading to Siquijor itself, my friends and I took a detour to Majuyod sandbar, an hour’s drive in a van from Dumaguete airport where we landed. There’s a video on social media that hails it as the “Maldives of the Philippines.”  We wanted to see it for ourselves.

It was only 15 minutes by boat from the drop-off point in Bais. There was a cottage waiting for us in the middle of the sea at the edge of the sandbar.

Since we made prior arrangements, lunch was ready the moment we got there.

After lunch, it was time to bring out our inflatables and float on the tide to enjoy the water surrounding the cottage.

Once the low tide came in at around midday, the sandbar emerged. Immediately we grabbed our drinks, hung out on the newly surfaced area and buried our feet in the sand. It was just like having a pool in the morning and a beach in the afternoon—only way better.

When the sun was about to set, we headed back to Dumaguete to spend the night and prepare ourselves for the main attraction.

Getting to Siquijor was not as easy as I thought it would be. There were less boat trips on weekends, so we took the earliest departing ferry at 7 a.m.

An hour and a half into the two-hour ride, the water turned into a rich, clear blue—all the way to the port.

It heightened our excitement of exploring the majesty of Siquijor.

We rented a coaster and headed straight to our first stop on the island, the Cambugahay Falls.

When we got there, some went straight to the top of the falls and plunged into the lake. The others took their time, dipped in the water and positioned themselves right under the waterfalls to shower. Who wouldn’t want to start their day with a cold and refreshing swim by a waterfall?

After everyone was revved up and endorphins were high, we took a crack at the famous swing set up by the locals. This is probably one of the most known sites of Siquijor posted on social media.

We wasted no time in trying it and released the inner Tarzan in all of us. Successful and unsuccessful summersaults or backflips were attempted repeatedly.

It was an exhilarating experience to catapult up into the air and land in the water;  twice or thrice of doing this was simply not enough. Really, everyone must try this at least once!

Less than an hour away is a public beach called Salagdoong where locals and tourists can enjoy the crystal-clear and blue water. There are numerous cabanas along the shoreline, which was the setting for our lunch.

Adding to the beach’s charm were the 20-to 30-feet-high platforms for cliff-diving created by the locals. Confronting one’s fear of heights and plunging into the sea is a great way to build up an appetite for lunch.

Accommodations were at Coco Grove which was only an hour away. This developed resort has one of the best beaches in Siquijor. A large stretch of white sand is surrounded by turquoise water. There are also hundreds of coconut trees planted around the resort.

This was the place to revel or reflect, depending on one’s inclination.

It was hard to leave and our journey back to Manila came with a heavy heart. Still, the experience created many happy memories of an enchanting  island.

There were plenty of stories and photographs to bring back and share. That, I believe, is the true “magic” of Siquijor. It allows us to discover, and rediscover, and ultimately fall in love with our country—again and again.