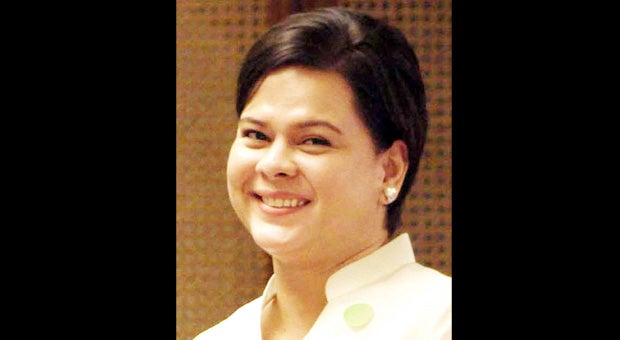 EXPECTING She’s doing well despite thrice the difficulty of a normal pregnancy, says expectantmother and Davao City Mayor Sara Duterte (here in a 2011 photo), of her triplets who are in their 7th week. The pregnancy is a result of in vitro fertilization (IVF) because themayor has difficulty conceiving the normal way, her information officer said. FILE PHOTO

Not one, not two, but three: Sara Duterte expecting triplets

Now that he’s expecting three more grandchildren to join the next generation, President Rodrigo Duterte is inspired to go after more criminals and “leave a legacy of a Philippines safe and secure from crimes and drugs,” Presidential Communications Secretary Martin Andanar said of Mr. Duterte’s reaction to news that his eldest daughter, Davao City Mayor Sara Duterte, is expecting triplets.

“The President is delighted with the news of his daughter’s pregnancy.  He is also hopeful that she will be able to see through the pregnancy smoothly and well,” Andanar said in a statement.

The development, he added, also inspires the Chief Executive to “to roll up his sleeves and work double time in his fight against crimes and drugs.”

“He hopes to leave a legacy of a Philippines safe and secure from crimes and drugs to future generation of Filipinos,” said Andanar.

The younger Duterte, who is married to lawyer Manases Carpio, is seven weeks into her second pregnancy, and apologized to her constituents for being unable to celebrate the Kadayawan Festival with them yesterday.

She was doing well although her situation was not easy, Sara Duterte said.  “The human body is made to carry just one baby and I am experiencing threefold all the pregnancy symptoms that a woman goes through,” she added.

Duterte’s pregnancy was the result of in vitro fertilization (IVF) because she had difficulty conceiving the  normal way, her information officer said.  Her son, Sting, was also the result of IVF, an assisted reproductive technology that involves manually combining an egg and sperm in a laboratory dish. The resulting fertilized egg is then transferred to the uterus.

“I am having a hard time with the symptoms as well as the complications of a multifetal pregnancy,” the mayor said, adding that she would continue to work as long as her doctors allowed her to.  But she had also been advised to avoid crowded places to minimize the risks of infections, she said.

“I may be physically weak but rest assured that I am on top of the situation here in our city,” the younger Duterte said.  With a report from Allan Nawal, Inquirer Mindanao/TVJ