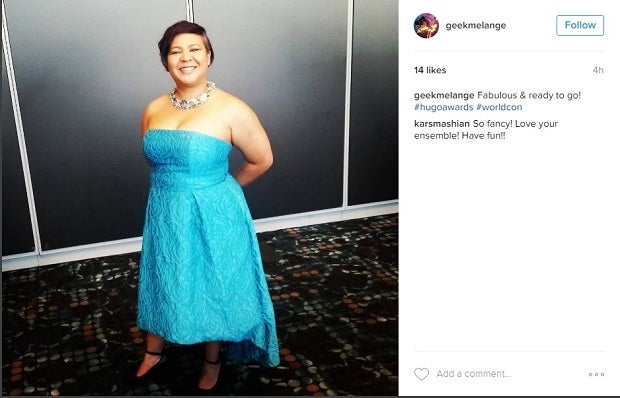 Michi Torta became the first Filipino to win a Hugo Award for being the managing editor of Uncanny Magazine. SCREENGRAB FROM MICHI TORTA'S INSTAGRAM PAGE @GEEKMELANGE

A Filipina made history after she won a Hugo Award for being one of the editors of Uncanny Magazine, which was hailed as the Best Semipromagazine during the awards ceremony held at the Kansas City Convention Center Grand Ballroom on Saturday.

Michi Trota, a Filipina based in Chicago and Uncanny Magazine’s managing editor, was joined by the magazine’s publishers and editors-in-chief Lynne M. Thomas and Michael Damian Thomas in receiving the award.

Trota, aside from being the magazine’s editor, is also a community organizer, speaker, and communications manager.

In her acceptance speech, Trota thanked her fellow editors for giving her the opportunity to become the magazine’s managing editor. She also gave a shout out to the supporters of the magazine, emphasizing that it was through them that the publication continued to thrive and evolve.

“It is essential to both create a space that welcomes and encourages others to come in and to venture outside into your comfort zones to find new people, invite them to share their voices and visions with you and provide them with support and opportunities. That understanding is what makes it possible to find and publish an incredible array of inspiring work,” Trota said.

The Uncanny Magazine beat other semipro magazines “Beneath Ceaseless Skies,” “Daily Science Fiction,” “Sci Phi Journal” and “Strange Horizons” to get the award.

The Hugo Awards annually fetes the best science fiction or fantasy works and achievements from the previous year. It is one of the highest honors bestowed on science fiction and fantasy writing./rga