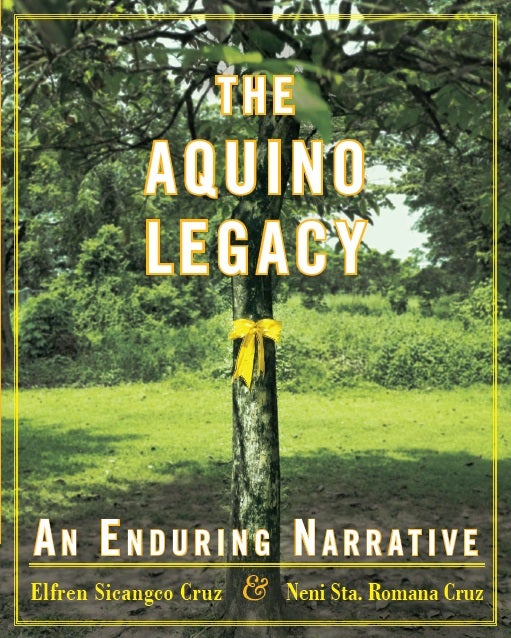 YESTERDAY, Aug. 21, marked 33 years since the death of Sen. Benigno “Ninoy” Aquino Jr. It is the best opportunity to discover “The Aquino Legacy: An Enduring Narrative,” the book about the Aquinos written by business writer Elfren Sicangco Cruz and Inquirer columnist Neni Sta. Romana Cruz.

“The Aquino Legacy” chronicles the contributions of Ninoy and his wife, the late President Corazon “Cory” Aquino in the continuing construction of Filipino democracy.

“The book was written because the authors strongly felt that the contributions of Ninoy and Cory Aquino to the Filipino people’s struggle for democracy are too significant to risk being forgotten,” the authors said. “This became critical as history appeared to be in serious danger of being rewritten and altered by individuals who seek a kinder and more heroic portrayal of themselves in the memory of a nation. This has greater relevance these days as the dark period of martial law is being dismissed and glossed over as an epoch that must now be forgotten. As if the remembrance of things past and sordid and painful posed an obstacle to our progress and maturity as a nation.”

The book was launched at the Writer’s Bar in Raffles Makati on Nov. 26, 2015, which was Ninoy’s 83rd birth anniversary. Former President Benigno “Noynoy” Aquino III and most of his siblings attended the event. “The Aquino Legacy” featured forewords by P-Noy and his sister Pinky Aquino-Abellada.

“This collection of essays is especially for the millennial generation or generation Y, described as those reaching young adulthood around the year 2000. The generation who may only know Ninoy and Cory as the parents of Kris and PNoy or the faces on our currency bills,” the Cruzes write.

“Let this book allow today’s millennials to approach the fascinating tale of the Cojuangco-Aquino family with greater interest and curiosity and less trepidation about cold, hard nosed historical facts. Straightforward historical accounts and commentaries have been juxtaposed with human interest essays, many of which have not seen publication before. We felt that the inclusion of the interviews with family members closest to Ninoy and Cory would offer a fresh and a different perspective on them as revered national figures—and of P-Noy as the former highest official of the land.”