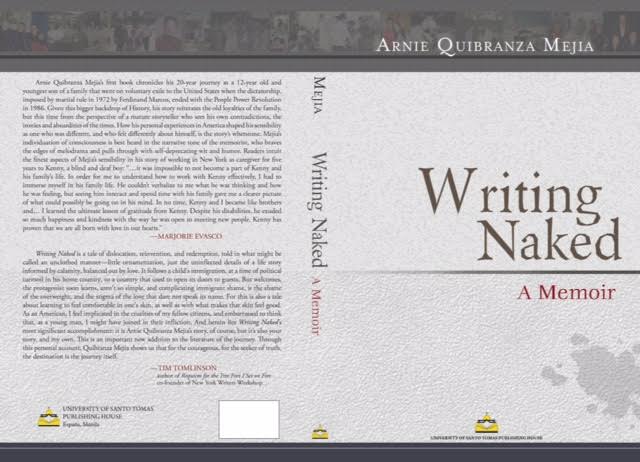 The dynamics of leaving, loving and living in Arnie Quibranza Mejia’s ‘Writing Naked: A Memoir’

IT IS NOT easy writing a memoir, especially if one is a beginning writer, for the simple reason that he or she is immediately thrust into the public eye with a work that can be likened to a huge door that allows the readers to enter the writer’s very intimate world.

There are many challenges in writing a memoir, the two most important of which are the baring of one’s soul and the coming up of a well-written narrative, and both extremely difficult to do. Baring one’s soul requires strength to make public your story, and writing well, as we all know, requires years of careful study and practice. Arnie Quibranza Mejia, the author of “Writing Naked: A Memoir” (2016; University of Santo Tomas Publishing House) succeeds in undertaking both with much aplomb.

With popular songs (e.g. “Hopelessly Devoted to You,” “That’s The Way Love Goes,” “Lucy in the Sky with Diamonds”) as chapter titles, we are provided with a glimpse of the theme of each piece, and how each song plays an important role in the writer’s experience.

This is actually a bit tricky, because in the hands of an amateurish writer, this would appear like a desperate effort to explain or to synthesize, like a much-needed chapter that would serve as a closing or ending, but Mejia executes this feat with such skill.

The book has three major themes: leaving, loving and living. In each essay, Mejia suffuses his personal story with rich details. In “Living in America,” for instance, Mejia does not only talk about the anxiety and excitement that he and his family felt upon leaving a life of luxury in the Philippines and adjusting to life in the US, but he also tells us about the difficulties of being dark-skinned and overweight, her mom’s depression, the impact of the death of his grandfather who is based in the Philippines, his father working as a security guard after being a high-ranking military official, and how he was able to cope with this new life.

In “Hopelessly Devoted to You,” he paints a sensitive portrait of his youth when he discovers his true sexuality after having a serious crush on a handsome white lad, making an effort to hide it by going out with a girl, and discovering genuine friendship and camaraderie in a musical group composed of choir nerds.

In “That’s the Way Love Goes,” he tenderly depicts his beautiful relationship with Ansel, his one great love, how they both felt an instant connection despite their very different backgrounds, and how they eventually became a couple. In “It’s All Coming Back to Me” he portrays vividly the pain he went through upon learning that his former lover is dying, and how he had dealt with his death is the subject matter of the next chapter which is titled “I’ll Cover You.”

But Mejia does not end his memoir on a depressing note. He decides to live life to the fullest despite the many uncertainties he has encountered. In chapters such as “Someday,” “Bahay Kubo,” “Future Lovers” and “Across the Universe,” Mejia shows that, indeed, he has come full circle by giving us a sense of an ending, as well as his readiness to face a new beginning in his life.

But what is most admirable about “Writing Naked” is that its major strength lies not only in the fact that it is very tightly and excellently written, but also in the choice of narratives which do not appear to be scattershot or randomly selected by the writer. The reader does not feel that the memoir is composed only of what the writer thinks to be the “highlights” of his life. Mejia never resorts to a cheap Shirley Bassey “This is My Life” moment that shouts to the whole world, “Hey! My life is so damn colorful, you better read it!” Instead, every chapter flows smoothly to the next one, giving the memoir a special kind of “wholeness,” a very organic feel, almost as if you are reading a well-written novel.

Furthermore, what makes “Writing Naked” extra special is that it is also funny and witty, moving and engaging, truthful and powerful, and more importantly, very, very sexy. With “Writing Naked,” Mejia has changed the landscape of autobiographical writing in the Philippines, not only because he is not afraid to disclose even the most intimate details about himself and his life, but also because he does it with both subtlety and sophistication.