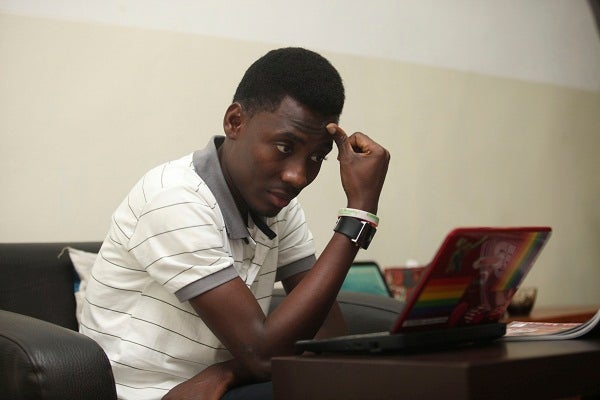 LAGOS, Nigeria— When a gang of men ambushed Rashidi Williams and a male friend earlier this year, the 25-year-old gay Nigerian was too afraid to report the attack to police or even to his family.

Doing so would only create more problems, he says, in this country where legislators are now seeking to criminalize gay marriage.

Here in the megacity of Africa’s most populous nation, Williams says marriage though is the last thing on the minds of many gay and lesbian Nigerians who fear physical danger in this conservative country.

“I took myself to the hospital but couldn’t say why I had been beaten up because that would have started another set of discrimination for me,” said Williams, who hurt his shoulder blade in the attack. “These things are so underreported in Nigeria. It doesn’t mean they don’t exist … People are getting killed.”

Activists fear that discrimination and violence will only increase if a bill drawing strong support in Nigeria’s legislature is passed. Under the measure, couples who marry could face up to three years in jail, and witnesses or anyone who helps couples marry could be sentenced to five years behind bars.

“If this bill passes into law, the Nigerian government will be sanctioning even greater discrimination and violence against an already vulnerable group,” said Graeme Reid, lesbian, gay, bisexual, and transgender (LGBT) rights director at New York-based Human Rights Watch.

The proposed law also has drawn the interest of European Union countries, some of which already offer Nigeria’s sexual minorities asylum based on gender identity. The British government also recently threatened to cut aid to African countries that violate the rights of gay and lesbian citizens.

Homosexuality is already technically illegal in Nigeria, a country that may be evenly divided between Christians and Muslims but is nearly universally opposed to homosexuality. In the areas in Nigeria’s north where Islamic Shariah law is enforced, gays and lesbians can face death by stoning.

Across the African continent, many countries have made homosexuality punishable by jail sentences. Ugandan legislators introduced a bill that would impose the death penalty for some gays and lesbians, though it has not been passed into law two years later. Even in South Africa, the one country where gays can marry, lesbians have been brutally attacked and murdered.

A group of international human rights organizations earlier this month sent a letter opposing the Nigerian bill to legislative leaders, the Nigerian National Human Rights Commission and Nigerian President Goodluck Jonathan, who has to approve the bill for it to become law.

Amnesty International, Human Rights Watch, and the International Gay and Lesbian Human Rights Commission also fear the legislation could set back HIV/AIDS prevention and treatment efforts in Nigeria, which has the world’s third-highest population of people living with HIV/AIDS.

Some gender experts say the bill could be an attempt to stir anti-gay sentiment.

“If you want to whip up homophobia, I think focusing on same-sex marriage is a very good way of going about it, just sowing the idea that there are lots of ‘those’ people who want to get married, so that it’s seen as attacking a fundamental social institution,” says feminist scholar Charmaine Pereira, who is based in Nigeria’s capital of Abuja.

The anti-gay marriage legislation, which is being considered for the third time since 2006, already has sailed through two readings in Senate. A public hearing meant to gauge public opinion on the bill saw gay rights activists booed and provided with police escorts to leave the hall after presenting their arguments against the proposed measure.

“I am so confident because Nigeria is a society that is very, very godly,” said Sen. Domingo Obende, who sponsored the bill.

Opposition to same-sex marriage is stern in this society that widely views childbearing as the ultimate goal of marriage. But a line near the end of the bill also defines same-gender marriage as “the coming together of persons of the same sex with the purpose of living together as husband and wife, or for other purposes of same sexual relationships.”

Some fear that definition seems to imply that even couples who live together, without being married, could face criminal charges.

Joseph Sewedo Akoro, executive director of The Initiative for Equal Rights, says Nigeria’s few gay rights activists often ask themselves how much time they can afford to spend trying to persuade lawmakers when ordinary people are the main perpetrators of discrimination and violence against gays.

He cites the example of South Africa, where gays and lesbians are still murdered and suffer discrimination even with laws in place that enshrine their rights.

For Williams, who still lives with his parents even though they disapprove of his sexual orientation, much work still needs to be done for Nigerians to become more tolerant.

“Inasmuch as I want to live with my gay partner at some point, I want to be able to do that in a country that respects that,” he says.