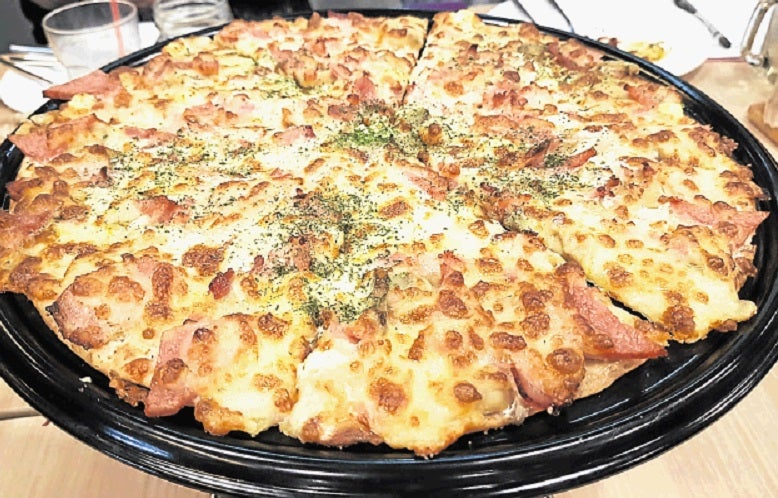 The pizza—presented at a recent media event by chef Sara del Puerto of Greenwich—is made with bacon, cream cheese, mozzarella, ham and mushroom, all sitting on top of a crispy thin crust. The rich cheese complements the salty, sharp taste and savory bite of bacon while the creaminess of the cheese is the perfect foil to the salty, umami flavors of the bacon.

At the event, participants were able to make their own pizza, guided by the staff and chefs. They were given the raw ingredients and the pre-spun pizza dough to work with. When all were finished topping off their creations, Greenwich staff took the pizzas and baked them, giving participants the chance to taste their own creations.

The Bacon Crispy Thins pizza uses two kinds of bacon —finely chopped and big slices. The bacon-on-bacon toppings give an indulgent but delicious taste, with a decidedly carbonara-like flavor. The thin crust, meanwhile, is chewy and delectable.

“There’s something universal about bacon. Everyone loves it,” said chef Del Puerto.

Other Greenwich dishes of particular note include the meat lasagna, which with its perfect al dente texture, can compete with lasagna in far pricier restaurants.

The Bacon Crispy Thins pizza is available in Greenwich branches nationwide until Sept. 30.