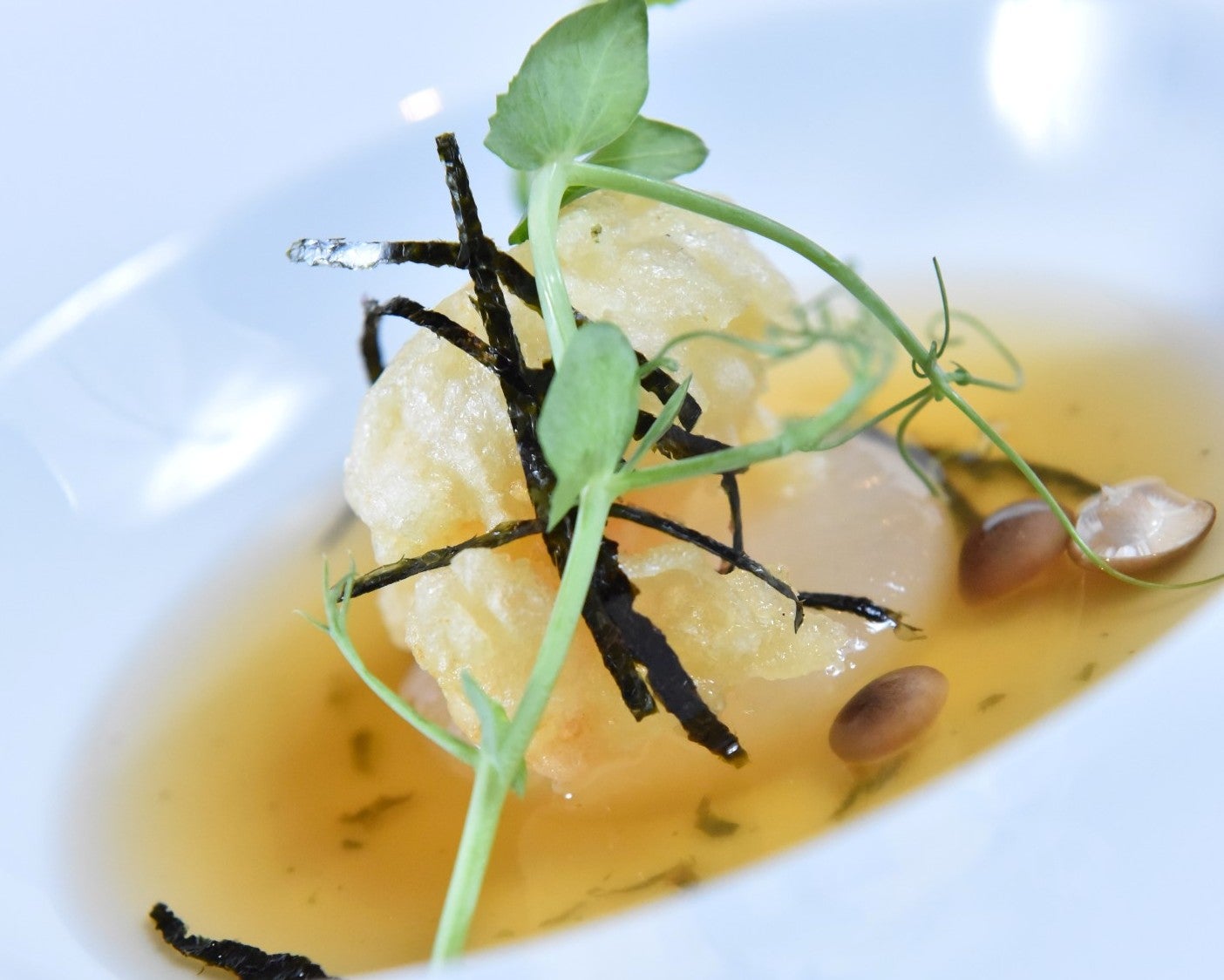 This we realized over the stretch of eight courses served by two very talented Filipino chefs over four hours at the Nobu Restaurant in City of Dreams last week.

Imagine foie gras made from the humble sisig wrapped in a gyoza cone as zensai, or appetizer. This was followed by tiny bits of Tuna Kinilaw Tartar with Ceviche Gelee, red onions, kyuri, local tomatoes and chili. Then out rolled the Ubod Salad Lapu-Lapu Shiso Crepe with jalapeño and Matsuhisa dressing.

Guests agreed the courses were local and Japanese at the same time. But with the tongue taking over the brain, it was hard to chalk culinary borderlines. The choice was just to eat and enjoy.

Next from the kitchen was Yellowfin Tuna with Green Mango Puree and a baby peach that was a really sweet touch. Then a show-stopping Spiny Lobster Tempura in Sinigang Consommé. This course was the fairest of them all. Estrellado would later talk about the painstaking process of creating it.

The next star was Sous Vide Crispy Pata with Amazu Ponzu and Rencon Laing. A bit dissonant since we almost always equate Japanese food with health. Eat a bit of crispy pata, follow up with laing, then another bite of pata and more laing.

Before we fell into a stupor, the chefs sent what was supposed to be the seventh course—a long thin plate of sushi with assertive Pinoy and Japanese elements. Think tuna sushi with a topping of gata and a drizzle of toyomansi. There was also a mixed seafood kilawin taco, whitefish sarciado-style and a tricky salay salay paksiw.

Honestly, it was a mad mix—but everything worked.

The last savory course was the slightly delayed Beef Kare-Kare in Anticucho Sauce. Think of our local version with a sweet brown sauce that was almost like caramel, only more suitable.

Dessert was a witty halo-halo with shaved ice made of coconut water. Mixed in were condensed milk and what tasted like green tea matcha incarnated as a miniature chocolate bar. Are you still with me?

Estrellado, who graduated first in his class at the New York Restaurant School in 1994, explained that the magic lies in omakase which literally means “a succession of dishes.”

Another thing: Both chefs clearly remember being told by chef Nobu Matsuhisa, pioneer of new-style Japanese cuisine, not to stray far from what he taught them in his kitchen.

“He makes (cooking) look so simple and easy but there’s a lot of thought to his dishes,” noted Nobu Manila’s De Jesus, whose bragging rights include stints in Nobu Los Angeles and Nobu Las Vegas.

A dish on the menu may have only four ingredients but it takes time to make them work, as a team would elicit “a kind of flavor and texture” that would make it unforgettable, he added.

Estrellado mentioned my personal star of the show, the Spiny Lobster Tempura, as an example.

“We made lobster stock using the body. Traditional sinigang normally uses sampaloc. But the acid we used is from a Japanese restaurant. We used a shellfish broth, the miso, we used a miso soup that we clarified to make a consommé using lobster stock. Good food takes a while to make,” he explained.

Chef Nobu, he pointed out, does not mind using a lot of time to perfect his dishes. This and his other reminder that the customer comes first.

“No matter what they ask for, try your best to do it. Even though it’s so unreasonable,” Estrellado recalled the chef saying. “You bend over backwards. That’s the biggest thing I’ve learned from him. No shortcuts, everything must be done the right way even if it takes a long while.”

Now Estrellado knows a thing or two about spending time in the kitchen to perfect a dish.

In his early 20s, Estrellado’s father convinced Ramon Rodriguez, the original owner of Goodah!!! 24-hour restaurants, to employ his son as a cook, hoping the hard labor would make him change his mind about going to culinary school. On the graveyard shift for P50 a night, Estrellado balanced himself on a block of wood extracting papaya juice for atchara, at the longstanding branch near the corner of Sucat Road and President Avenue in BF Parañaque.

“It was his way to convince me not to go into cooking. But when he saw I was willing to work hard, he agreed to send me to the States,” Estrellado said.

After graduating from the restaurant school, he worked briefly for Nieporent’s Montrachet in Tribeca. A very impressed Nieporent later invited Estrellado to transfer to Nobu New York, where he rose quickly from prep cook to chef de cuisine.

Pinoy food in the limelight

De Jesus said they made sure everything served that night would be the Filipino food that would pop up in everyone’s mind when somebody says just that.

“We were trying to go for something people can relate to,” he explained. A deeper motivation, however, was De Jesus’ desire to stress that Filipino food, contrary to Old World thought, is not just for “farmers or poor people.”

“I always have this argument with people. I tell them this French food or Italian food that’s ‘so refined’ is basically (the harvest of) farmers. We just haven’t had the opportunity to put Filipino food in the limelight. But this way, we are able to show that our flavors matter and they actually can be elevated to this kind of experience,” he added.