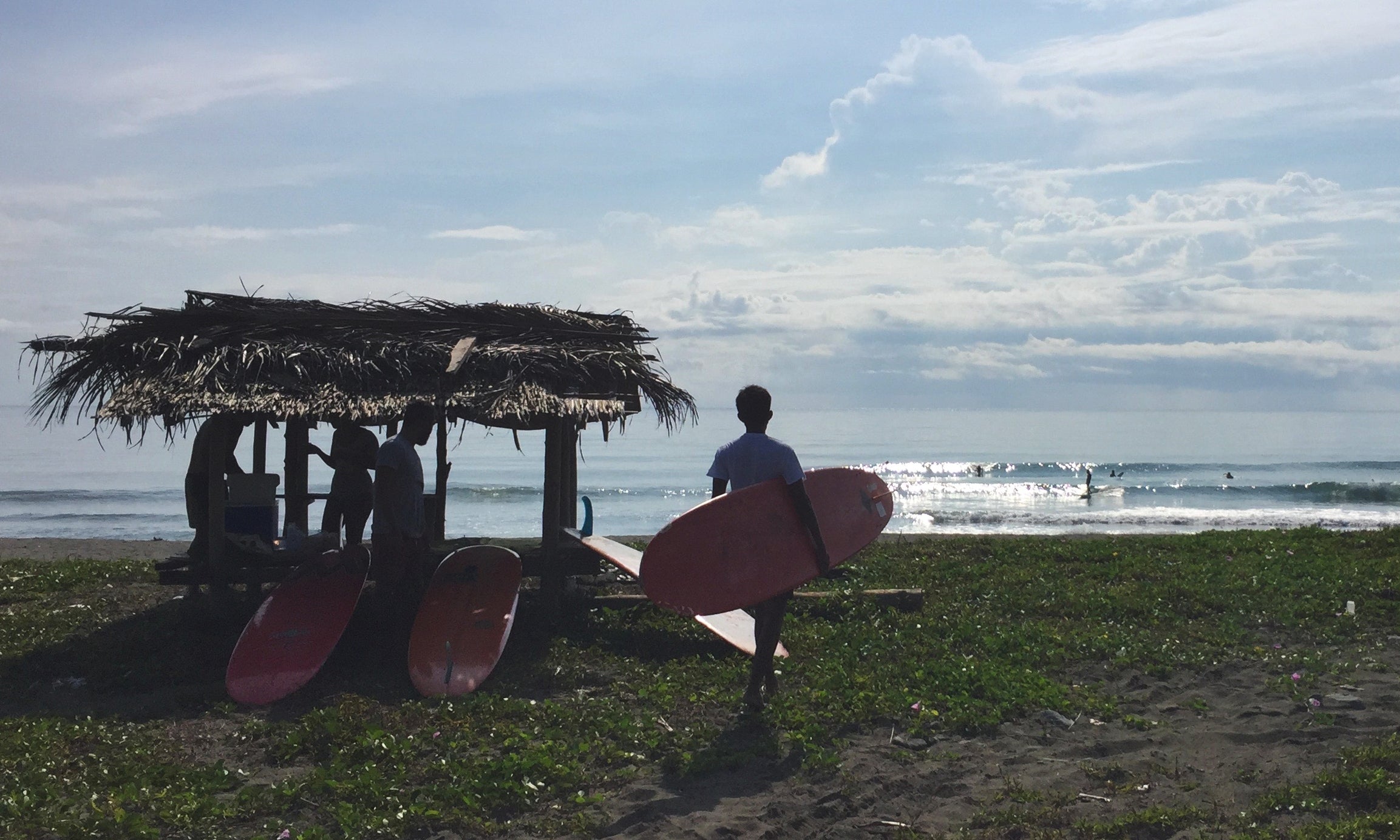 Riding high the waves of Baler, cradle of surfing lifestyle

On Sabang Beach in my hometown of Baler, Aurora, while the sun was setting and I was learning to surf a long time ago, I was about to give up after being wiped out for the nth time. I told my instructor I would catch one more wave just to get me washed to shore, to which he, sensing my exhaustion, agreed.

He spotted a wave and told me to get ready, a surfing beginner’s code—at least in Baler—to bend the right leg, foot  a few inches against the left knee, elbows folded and palms beside the chest.

The instructor pushed my board, and when I heard him yell “Up,” I pushed myself up, gently but quickly. And there I was, riding long toward Sabang.

In surfing lingo there’s a word to describe a good surf session—“stoked.” But I felt more like I took a shot of dopamine.

My cousins, who were frolicking on the sand, saw me riding and went wild. I glanced back at my instructor who was smiling and I noticed some local surfers on the lineup clapping at my little triumph.

After the greatest ride of my life, I asked myself why it took me 15 years to get on board.

Scientist Walter Munk, known as the “Einstein of the Oceans,” discovered that some waves are formed in the ocean  15,000 km from shore, traveling the distance until they reach full form and eventually break.

The longer the distance traveled by a swell, the cleaner it arrives on shore. My first wave ride felt like a giant heave made 15,000 km off Baler; I had to wait and get wiped out a few times, but the ride was worth it.

Baler has been making waves on different news and social media platforms. It has welcomed an exodus of tourists  seeking escape from the heat of the city.

Hotels and transients have been opened to accommodate the increasing number of tourists.

There’s the high-end Costa Pacifica that offers a front-row view of the Sabang Beach sunrise.

More affordable places for backpackers are Circle Hostel and Kahea’s Lodge. Houses and cottages like Balud Camp are available for rent for big groups; there’s even a tree house for rent at Kael’s Farm.

But the real winner is pako salad, a fern abundant in Baler, boiled and then seasoned with bagoong and kidya (Baleriano for calamansi), served with salted egg and tomatoes.

Lined up on the boardwalk are surf schools—colorful tents with foam boards on display—where tourists can rent  surfboards and hire instructors for P350 per hour.

Indeed, Baler has come a long way from the sleepy old town always mistaken as part of Quezon province and isolated by the Sierra Madre mountain range.

Now, Baler is known as the birthplace of Philippine surfing.

According to local surfer Olin Duaso, surfing was introduced in Baler in the early ’70s,  even before the crew of 1979 film “Apocalypse Now” arrived in town with their surfboards for the shooting of the film.

Two Peace Corps volunteers were reportedly the first to arrive in Baler in search of waves. They stayed with the Carmelites at Baler Church—the same church that housed the last Spanish troops in the Philippines that fought the legendary 337-day Siege of Baler.

Raul Tolentino, a local who lived on Labasin, the street leading to Sabang Beach, followed the Peace Corps volunteers around. He now said that the Americans  went surfing in Cemento Beach, known as the glassy Cobra Reef.

Children of G.I. or US military personnel also went to Baler frequently to catch some waves.

Two foreigners from Surfer Magazine journeyed 12 hours (mostly on dirt road) from Manila to Baler in search of a Philippine beach where they could hold a surfing competition. The town struck them as “primitive” because the locals barely spoke English.

“We soon found out ‘malaking alon’ meant big waves, but these people [locals] didn’t understand why we wanted big waves,” said Rick Howard in his documentary.

He added that the locals were not fond of big waves because they caused trouble for the fishermen.

In the late ’70s, the “Apocalypse Now” crew discovered a good surfing spot in Barangay Reserva, a tricycle ride away from Sabang.

They named the place Charlie’s Point, meaning “Viet Cong” or Vietnamese insurgents, after the 1970 Vietnam War setting of the film.

Local boys who dared surf were stereotyped as beach bums.

“The titos we passed by every day at the old Pag-asa called us ‘Hawaiianong hilaw,’” said Duaso, who has been surfing since he was 9 years old.

In 1987, an international surfing contest was held in La Union, and the only Filipino delegation was the “Hawaiianong hilaw” from Baler.

Secret Spot is also minutes away from Sabang. It is called Secret because waves come only during the right swell season, usually when a typhoon hits town.

Although it is no match to the pristine white shores of Boracay, and its swells cannot compare with the towering waves of Cloud Nine in Siargao, Baler has made a splash even internationally.

When they see a big wave, riders yell, “Akaw!” In puntong Baler, or native pronunciation, akaw is pronounced “uh-cow” and it is uttered to express amazement, surprise and even disgust.

But for me, akaw will always be synonymous with that rush of dopamine I felt the day I caught my first wave.