On its 47th season, Ballet Philippines takes off with ‘Firebird’ | Inquirer Lifestyle 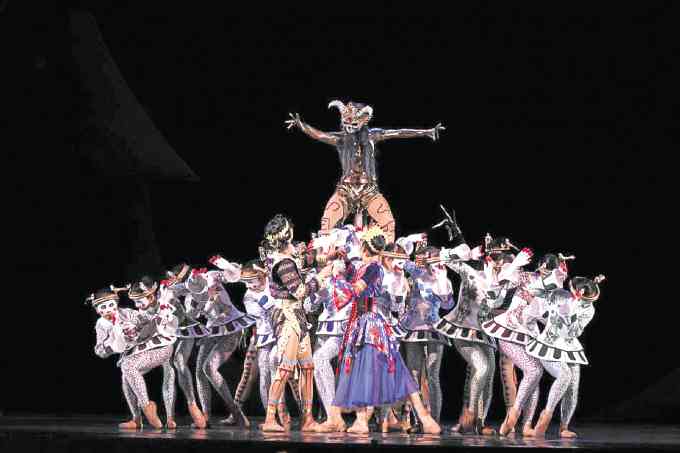 On its 47th season, Ballet Philippines takes off with ‘Firebird’

BALLET Philippines’ opening of its 47th season was a grandiose salvo of three divertissements and the full-length ballet, “Firebird,” perhaps the shortest full-length ballet running anywhere between 36 to 50 minutes, depending on the orchestra’s rendition and the choreographer’s interpretation.

The divertissements were studies in choreographic innovations sprinkled with recognizable derivations, but nonetheless refreshing takes on the adaptive liberties undertaken by the three contemporary and modern choreographers.

“Weighted Whispers” by Hong Kong-based choreographer Carlo Pacis, was all at once breathtaking and painful to watch, given the behandled corsets incorporated into the dancers’ costumes which served as the appendage with which the dance partners push, pull or support one another. Pacis’ first conceptual study of this same piece, “Shifting Weights,” explored the basic dance principle of keeping to one’s center for balance, experimenting with moves manipulated by the use of the handles.

The dancers’ weight is forced to define the core as the body is either pushed or pulled freely into positions which ordinarily are unexecutable with flesh-to-flesh contact.

The handles work as an extension of the hands which in classic partnering format are instrumental for support. But with the handles, there is an added dimension of enabling the dancer to fall freely at a longer distance and with a larger cradle of support provided by the corset. Thus, the shift in weight, given the unnatural circumstance of classic partnering.

In its extended version titled “Weighted Whispers, ” the dance starts with the original concept of Pacis, then extends the experiment giving the piece a narrative line, which is the painful part, as it subjects the female dancer to abusive sado-masochistic moves in a suggested love triangle: girl caught between one gentle lover, and another exciting but physically abusive boor.

Delving into the psychological realm of a victim’s desire to please the abuser, she chooses the abuser over the gentler lover, and in the end, is left with no one.

Perhaps an abstraction, rather than a narrative would have been the more pleasant option in exploring his concept more without the burden of storytelling. But eschewing the added narrative, it is best to focus on the dancers’ exquisitely controlled ensemble energy in their execution of Pacis’ excruciating choreography and his stretch of daring choreographic imagination.

In “Karga Tapas,” for example, where the Bacolod born-and-based choreographer essays the plight of the sakada (unskilled laborers “imported” from out of town whose wages are lower than that of hometown workers), Rodrigazo’s moves are edgy, masculine and angular; similarly, in “Portlinks” and his other contemporary works.

In “Moving Two,” set to Pachelbel’s well-loved Canon in D major, Rodrigazo plunges right into a light neoclassical/contemporary mode, danced in a most delightful pas de deux by two alternating pairs: Katrene San Miguel and Lester John Reguindin on one night, and Jemima Reyes and Victor Maguad on another night. It is fluid, graceful and refreshing with a trace of wit, a respite from Pacis’ courageous artistic cruelty.

Ne Neh Ledej, Czech for “do not look any further,” is a mesmerizing ensemble number set to the music of Czech avant garde singer, violinist and composer, Iva Bittová choreographed by Spanish dancer-choreographer, David Campos.

Hailing from Barcelona, Campos is all too familiar with the exoticism of the Orientalist mode, and in this piece, the mix of Indian music by an Eastern European and the classicism of the French-originated tutu. His steps incorporating Indian moves seem to be gleaned from the classical and neo-classical Indian dance movements. Some recognizable moves look like they were from Kathak, or the travelling storytellers, minus the bells on the ankles.

Interestingly enough, Campos borrows from the dance origins that were the basis of Spain’s best-known dance form, flamenco. It is in successful dance treatise such as these that one can appreciate the value of shared heritage especially when its choreography is intelligently referenced and executed with perfection and imagination.

Perhaps the only obstruction to the dance was the overpowering set: a backdrop of zebra-like patterns in camel and black, drowning the white tutus with ecru cut-outs, and dwarfing the male dancers in loose white chinos and white shirts worn open. The cut-outs on the one-sided white powder puff tutus were not as discernable as when the backdrop at the start was stark black.

Much hubbub was created by the publicity on “Firebird,” Igor Stravinsky’s breakthrough score that literally drove up his worth overnight as a modern composer.

Much has been said about Mark Higgins’ costumes that did not spare any detail, down to the varnished authentic star anise on the Princess’ crown or the meticulously hand-painted porcelain jars and detailing on the dolls costumes, or the wicked headdresses that demanded testing and re-testing to assure the dancers playing the evil Koschei of visual survival.

It is largely Higgins’ merciless compulsion that created that magical fantasy and masked many technical production imperfections, and to an extent, the choreography that could have used some dramaturgical help with the narrative.

There is a certain amount of risk taken when a score that was originally composed heavily relying on Russian characters and music, and was primarily conceived to be a purely Russian ballet, is transported into a fantasy context of some imagined cross-cultured world. One can take license by supporting this transmigration with unmistakable identifications in movements, steps and nuances, which were visibly short in the reworking of this ballet’s chosen cultural identity, an Asian hybrid visualized by Higgins as something out of the Silk Road.

If one were to take into consideration the tightness of the original collaboration between choreographer, Michel Fokine, and Stravinsky, it would show that “each phrase of Stravinsky’s music was part of the total conception of the action and was developed from particular elements inherent in the Russian folk music which forms its basis,” writes English author Joan Lawson in her dance history treatise.

Stravinsky wrote his music not to serve dance, but to control it, something that is very evident in how his musical phrasing is continuous and in conjunction with the movement. It is rich and it is packed.

This, in fact is the very thing that set apart Stravinsky’s scores from the older composers: his music was so attached to the action that years later, even Walt Disney could not help but use Stravinsky’s ” Rite of Spring” to score a segment in the animated cartoon “Fantasia.”

The magical quality of the ballet, however, could not be denied on the CCP stage. Rita Angela Winder was an elegant, beautiful firebird, her technique and stage presence getting honed more and more with each season.

With long limbs and an expressive face, Winder embodied the perfect ballerina physique, partnered by the princely Gary Corpuz, he of clean leaps and tours that seem effortless.

The alternate cast of Jean Marc Cordero and Jemima Reyes were equally engaging. What Reyes lacked in height and limited acting skills, she certainly made up with a clean and secure technique. Cordero is not only a technician but also a fine dancing actor whose small but perfectly expressed comedic hints are effectively underplayed.

Cyril Fallar and Victor Maguad alternately cast as the evil Koschei both possess a bodily articulation and forceful technique that convey the necessary sleaze and evil required of the part. (Sadly, Ballet Philippies bids goodbye to Fallar after this performance; he has given 10 years of beautiful performances to the company).

The Princess roles danced by Monica Gana and Denise Parungao are both pretty and delicate, so becoming of the intricate costume they wear fashioned in real silk, personifying the iconic Slim’s style of couture.

George Birkadze’s attempt at retelling this famous ballet is perfectly laudable given the patience he displayed in the weeks he was here for rehearsal, coaching each character, and even adjusting choregraphy to suit a costume he already liked.

Between choreographer and designer, there seemed to be a tight connection in the shared desire to fill the evenings with enchantment, as well as a mutual understanding of how it was to be achieved.

In his own words, Birkadze felt “somewhat pressured in putting on this ballet, as I know I have big shoes to fill,” citing the early history of Ballet Philippines in having guested famous dancers in the past such as Rudolf Nureyev, Margot Fontaine, Cynthia Gregory, Fernando Bujones and many others.

“I feel deeply honored to have been given this chance to create a new work for this company… to show off their (dancers) unique abilities and extraordinary artistry,” he said humbly. He praised the dancers who “gave their 100 percent into each rehearsal.”

When the feather and fluff has died down, it is, at the end of the day, about the dancer and the dance.