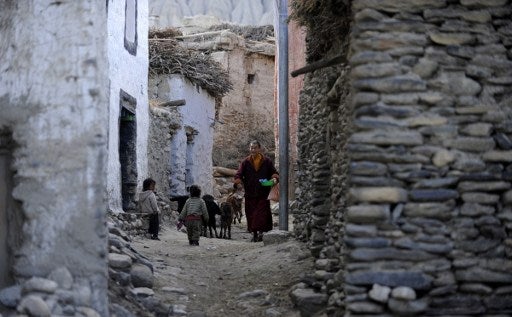 (FILES) This file photograph taken on June 14, 2016 shows a Buddhist monk walking past children in Ghemi Village in Upper Mustang, north-west of Kathmandu. In Nepal's isolated, high-altitude desert of Upper Mustang, a new road to China is bringing economic transformation to the former Buddhist kingdom, once a centre for trans-Himalayan commerce. / AFP PHOTO / PRAKASH MATHEMA

In Nepal’s isolated, high-altitude desert of Upper Mustang, a new road to China is bringing economic transformation to the former Buddhist kingdom, once a center for trans-Himalayan commerce.

The remote region is ringed with vast canyons and red mountains that, legends say, are stained with the blood of a demon killed by the founder of Tibetan Buddhism.

Yet the recently completed unpaved highway that connects Upper Mustang with China is also bringing unprecedented cultural change to a region that was closed off to foreign visitors until 1992.

Nevertheless, while modern life holds considerable allure for many, the push to preserve traditional culture is no less important to the local Loba community. Buddhists who speak a variant of the Tibetan language, they have lived in Upper Mustang for centuries.

Nowhere is this more evident than in the ongoing effort to restore sacred murals and monuments, supported by foreign and Nepali non-profit organizations, including the Lo Gyalpo Jigme Foundation, which is headed by the former king of Upper Mustang.

Although the region’s rich heritage escaped the ravages of the Cultural Revolution that hit neighbouring China, its monuments fell prey to environmental damage.

Over the last decade, restorers have been working hard to shore up structures, clean murals and retouch damaged paintings in line with Buddhist beliefs.

Buddhists believe it is better to pray to undamaged images of the Buddha, and see it as their duty to repair and retouch them when necessary.

The painstaking process involves grinding gemstones like lapis lazuli and malachite into a fine powder, which is then mixed with water and animal glue to create luminous pigments fit for gods.

Like many here, they too are locked in a race to preserve Upper Mustang’s unique cultural legacy for future generations.

Nepal holds memorials for quake victims one year on