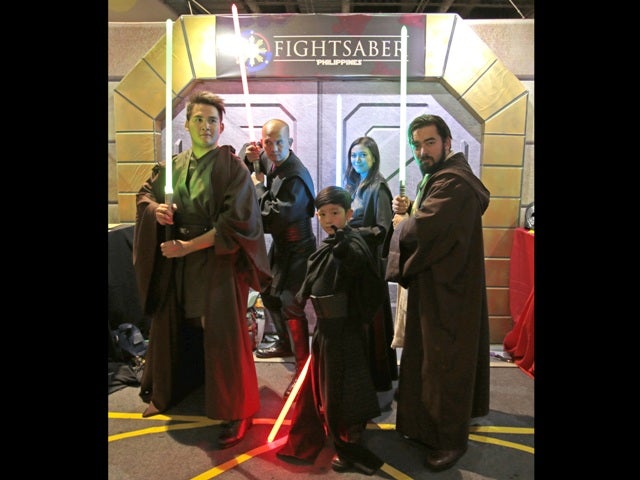 “Daddy fights the Jedi. He’s a powerful Sith lord and he can crush anyone with his awesome lightsaber moves.”

The children of Marc Macalua could brag about their dad along those lines, but they should also be proud of themselves since, like their parents, they dressed up quite credibly as “Star Wars”  characters.

Marc, his pregnant wife Sharm, and kids Kendra, 6, and Winter, 4, trooped to AsiaPop Comicon Manila at the SMX Convention Center over the weekend wearing the costumes of Sith lord, a pregnant Padme Mustafar and Stormtroopers, respectively. Several times they were asked to pose together for photos by people who couldn’t stop admiring them with exclamations of “Awww, how cute!”

The Macaluas actually came to the event with a purpose other than to just be cosplayers—in fact, they should be referred to as movie-accurate costumers, we were told.

Marc is the so-called Garrison executive officer of Philippine Garrison, the local chapter of 501st Legion, which is an international community of Star Wars fans who wear costumes to raise funds for children’s charities. It originated in South Carolina, US, in 1997; the Philippine chapter was established in 2004.

A marketing executive of US Auto Parts in the Philippines, Marc also moonlights as the so-called Temple Master of FightSaber Philippines, a Lucasfilm-recognized fight-choreography group whose members don the cloaks of Jedi masters and Sith lords while wielding reproductions of the elegant weapon called lightsaber.

At Comicon Manila, the costume and choreography groups set up their booths back to back.

The Garrison or costume side resembled a garbage compactor (in “Star Wars Epside IV: A New Hope,” that’s the dumpster-like enclosure where Luke, Princess Leia, Han Solo and Chewbacca got stuck in a pool of murky water piled with waste) against which movie-accurate costumers posed with fans for photo-ops—for a P100 fee, no matter how many family members or friends joined in. For P200, anyone could sign up for the Jedi Academy and learn the basics of using a lightsaber with the FightSaber team.

The proceeds would benefit Make A Wish Foundation, the nonprofit group that grants wishes to youngsters with life-threatening medical conditions.

“All appearances are for charity,” confirmed another Pinoy 501st member, Oneal Rosero.

“All our appearances goes to organizations like Make A Wish, Unicef, and we donate directly to hospitals. Everything is free. This is done worldwide, in almost every country around the world.”

Membership is varied, though everybody is required to follow the set of standards for “Star Wars” apparel. Applicants have to wear movie-accurate costumes.

The Philippine Garrison costume set on which we happened to have our photo taken had two doctors, a pilot and a flight attendant looking like genuine characters from the film franchise. An engineer even had on an impressive Chewbacca suit—large, furry—and he spoke Wookiee like the real Chewie!

At the choreography booth of FightSaber Philippines, the Jedi masters were conducting Padawan (Jedi apprentice) training for kids as young as 5 years old. Later on they became part of an exhibition fight between the forces of good and evil. The youngest taking part in the encounter was Sid Ronquillo, 13.

Dressed as a young Kylo Ren, Ronquillo seemed a master of lightsaber choreography and would gamely slide, tumble and fall when Padawan would summon the Force to repel him.

“We do it as a hobby, for the love of Star Wars,” said Marc, who, when we caught up with him on Day 3 of the Comicon, wore a Generic Sith outfit, one of seven authentic costumes in his collection.

“I was a dancer and I like to do performances, but as long as you can wield the lightsaber and have the resistance for practice then you’re going to be fine [as a FightSaber member],” he explained.

“Our people come from all walks of life and have different fitness levels. It’s just the love of Star Wars that unifies everyone.”

Want to be a “Star Wars” movie-accurate costumer or perform fight choreography a la Jedi or Sith? Follow Philippine Garrison of the 501st Legion and FightSaber Philippines on Facebook, @pinoy501st and @FightSaber on Twitter.