The Beast is a fanboy | Inquirer Lifestyle ❮ ❯ 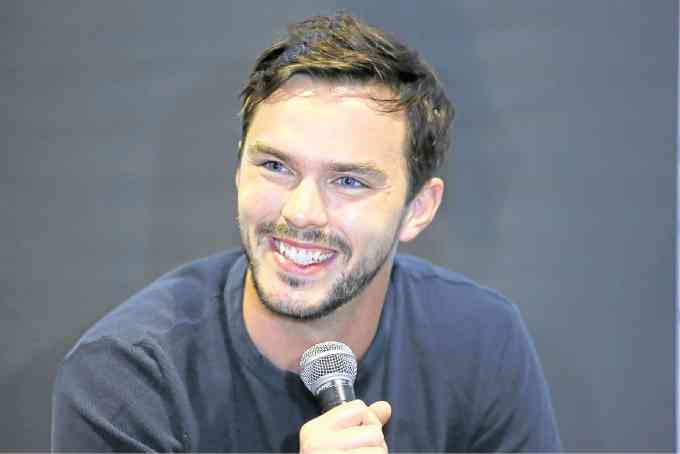 IF NICHOLAS Hoult wasn’t cast as Beast, he said he would have liked to be Magneto. “I think I love what Michael Fassbender does with it, what makesme drawn to the character. I don’t think I’ll ever be muscled enough to playWolverine.” PHOTOS BY KIMBERLY DELA CRUZ

The Beast is a fanboy

When Nicholas Hoult landed the role of Beast in the “X-Men” movie franchise, the first thing he did was tinker with his phone’s settings.

He immediately changed his wallpaper into the blue mutant with super strength, and had the X-Men cartoon theme song as his new ring tone.

The actor was set to film “Mad Max” at the time, but the movie’s shooting got delayed, forcing him to call his agent for a new job.

“Audition for ‘X-Men,’ quick,” his agent told him. “They were interested in you.”

“I thought I had a bad audition so I was in a pretty bad mood flying back to Australia from London. So I was really, genuinely surprised when I got the role,” he shared.

Hoult then read a lot of the “X-Men” comics to prepare for the role, revealing that his favorites were the “First Class” and “Dark Beast” series, where he studied Beast’s two personalities, movements and even the character’s relationships with the other X-Men.

“It’s all about reading the comics and trying to gain what you can from there,” he said.

“I also read a load of them because Beast had quite a distinct way of speaking. He’s a very eloquent and intelligent man,” Hoult added.

As Beast, he gets painted blue and wears a muscle suit on set, and in between filming scenes he shared with his fans the difficulty of having too much prosthetics on.

“Going to the toilet, you look across and you see a blue furry guy staring back at you—it’s quite a strange experience. It shows that no matter what you are in the world, you still have to go to the toilet!” Hoult joked.

“People would also video me while I was eating, they just found it hilarious how slowly I had to eat—and in such small bites—so I didn’t affect the make up. People would take a video of me, playing sad music over it,” he added.

In their free time in between taping sessions, he and his fellow “X-Men” cast members got very competitive in the “Punching Game” and their war battles with their BB guns.

Hoult also shared his sadness over Hugh Jackman’s last portrayal as Wolverine in the upcoming, still untitled third installment showing this 2017, saying working with the veteran actor was a surreal moment for him and his childhood.

“I grew up with him playing Wolverine, the first film I saw him in was when I was 11 years old,” he said.

“I’m just thankful for all the wonderful work he’s done through the franchise. He’s just been phenomenal in that role, and I feel very fortunate to have been around him and be a fan and see him bring Wolverine to life so greatly,” Hoult added.

For most of the characters he played—including R in “Warm Bodies” and Nux in “Mad Max: Fury Road”—Hoult spent a lot of time in the makeup chair, and has been part of worlds that are in the genre of speculative and science fiction, but for his upcoming biographical movie, “The Rebel in the Rye,” he plays novelist JD Salinger.

Everyone in the AsiaPOP Comicon’s main stage had their eyes on him—his fans screaming and waving to get his attention—and he told the crowd: “I am a fanboy, too, essentially. These are the people that keep you in this industry and make you want to keep creating good films.”