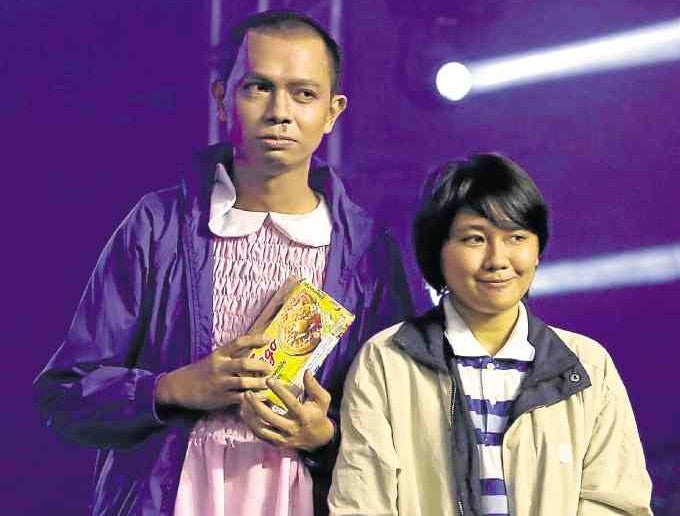 DANGEROMO and Gabby Navarro stood out from the crowd of hundreds, catching the attention of 12-year-old sensation Millie Bobby Brown. PHOTOS BY KIMBERLY DELA CRUZ

What do you do when Millie Bobby Brown of “Stranger Things” recognizes you cosplaying as Mike and Eleven?

You panic. You suddenly can’t speak English—or any other language, for that matter. You forget you have a camera to capture that rare moment (thank god, Millie had videos in her Snapchat).

The hundreds of other people with you disappear as you focus your energy on holding your props tightly—whether it’s a box of Eggos or dismantled bike handlebars—and give Millie your best version of a frog face smile and death stare.

After watching the series in July, Gabby Navarro and Dan Geromo already knew what their Halloween costumes would be for their office party this year.

For starters, they already had the hairdo for the characters they wanted to dress up (or more specifically, cross-dress) as—Mike and Eleven, respectively.

But the two had to prepare their costumes earlier than Halloween, after AsiaPOP Comicon announced that Millie Bobbie Brown was among the event’s Hollywood headliners.

Navarro sported a boy-cut, striped T-shirt, khaki pants and a classic nylon jacket, and trotted around with bike handlebars to define the character she was cosplaying.

“I feel like they’re my childhood friends. When I see them together I feel a connection,” Navarro said of the characters, whom she also described as creative theorists, linking their search-and-rescue mission-slash-adventure to science, games and even stuff they geeked over.

“They’re not the type to accept that their friend just went missing. And what I really like about Mike is he’s the loyal friend that you can really rely on,” she said.

Geromo, meanwhile, had a shaved head, and wore El’s signature combination of a pink dress and denim blue jacket, complete with high socks and sneakers. He didn’t forget the details, either; he marked his nose bleeding red and carried a box of Eggos.

“El is a combination of every heroic but weak type of character from the ’80s—Drew Barrymore in ‘Firestarter’; ‘ET,’ ‘Touch of Akira’—I’m a fan of all of those, and Eleven’s just so charming,” he said.

“It wasn’t hard to look for our outfits, one visit to the ukay-ukay and we immediately found Mike’s jacket,” Geromo, a cosplayer hobbyist, also shared.

When Millie saw them, she said it made her miss her fellow child actors—“the boys,” as she called them. She said that the cast had developed an unshakeable friendship outside the set.

According to Navarro, “‘Stranger Things’ is new, and at the same time, familiar. For the longest time I was looking for a TV series that I can binge-watch, be kilig about and geek over, and she [Millie]—and the whole cast—came along. Sobrang bow down ako to the Duffer brothers with their concept.”

The Netflix series, which has quickly escalated into a TV phenomenon, is reminiscent of ’80s shows and films, with a story treatment and production that’s nostalgically familiar—with one pop culture reference after another—yet with a contemporary eerie charm.

Geromo said “Stranger Things” was like watching an episode of your weekly thriller series back in the day—one that you missed and just discovered after all these years.

“It’s fun because there’s a new fandom—we’re fans of the genre, we’re fans of science fiction and fantasy, so thank you, Millie, for giving us a very new and awesome character to idolize,” Geromo said.