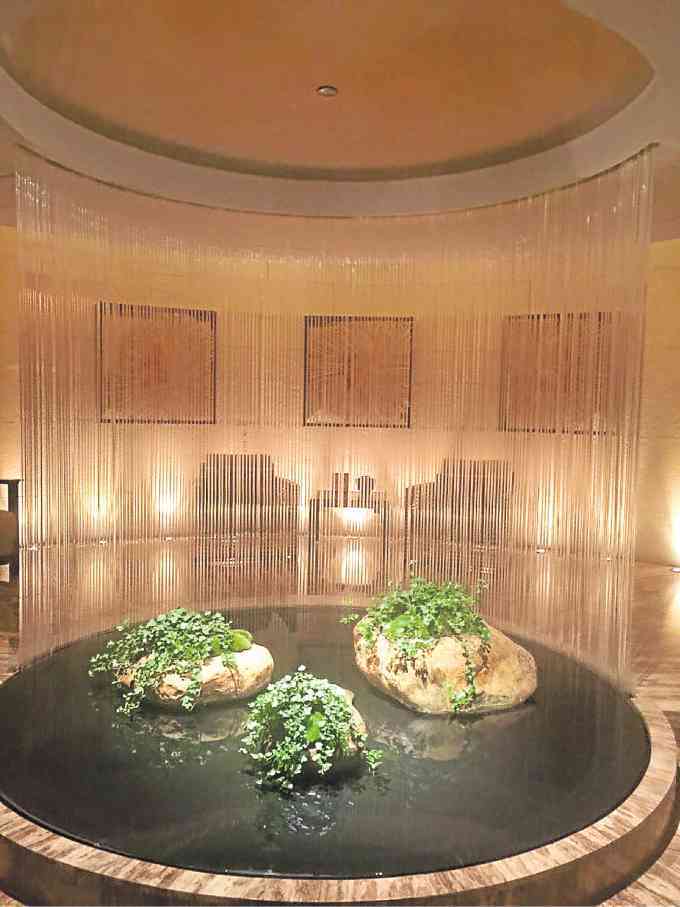 FOYER at the Spa PHOTOS BY THELMA SAN JUAN

As early as three decades ago, eminent fashion designer Auggie Cordero summed up for us, quite graphically, what it was like to stay at The Peninsula Hong Kong, his  favorite hotel.
“They’re there, but you don’t see them. Then just when you need something, they pop up from nowhere, to serve your need. So discreet. So unobtrusive,” he would tell us several times about the Peninsula staff service which, to him, was and still is unmatched.

Now we can’t wait to tell him our rather eyebrow-raising, if incredible, experience with the staff service during our stay there a few weekends ago, but that is getting ahead of the story.

To this day, Cordero is amused each time we recall the first time my media group stayed at The Peninsula HK. This was in the early ’80s, when our group was billeted in this iconic hotel, which at that time happened to be fully booked so that the hotel had no choice but to upgrade us to a suite. Upon hearing our story, Cordero was incredulous that we spent our coverage-downtime (of HK’s ready-to-wear industry) resting in the suite, lying in the tub with a view of the HK skyline sprawled out at our feet.

He got the most fiendish laugh, however, when we recounted how we capped our stay—with a Rolls Royce ride to the airport, which we readily said yes to at the front desk, not knowing that would set us back by HK$800 (yes, that was a long time ago). Having coughed up that amount, we basked in the luxury of the ride to the airport, with hardly a loose change (very loose) to spare for tips.

Now, a few weekends ago, on a personal trip to HK to visit our tennis buddies who had relocated there, by coincidence, we got an invite, through The Peninsula Manila, to stay again at The Peninsula HK. We welcomed the stab at nostalgia.

The Peninsula touch is felt the moment you emerge from the tube. A staff awaits to walk you through the Immigration, then the baggage carousel and finally settle you in in the Rolls. When you do, it’s hard to stay jaded—the perfect selfie is surpassed only by the piquant smell of leather seat upholstery.

You take in the passing view of a familiar HK, which is easily one of the most affluent corners on earth—who was it who said that you could pluck gold right off its streets, so driven Hong Kongers are to make money. This, as you enjoy the comforts of the ride, from the drinks to the WiFi.

No matter that it has seen the changing of the social guard through generations, The Peninsula lobby has that initial jaw-dropping effect on guests the moment they cross its threshold, especially that of The Peninsula Hong Kong which has become known through the ages for its High Tea. “You must experience its High Tea,” Cordero would tell us repeatedly in the ’80s.

Today, you fall in line just to experience it, especially on weekends.

But other than the High Tea, what, to us, is distinctive about the Pen is the warm cream color of its rooms and corridors. It’s a shade we’d always press Cordero to define and which we tried to replicate in our home (no success)—the color of warm milk, that’s the best we can put it.

It gives one the feeling of being in a safe, cozy cocoon—a cuddly color.

One night, a long time ago, at The Peninsula New York, lounging in our room (after a day’s coverage) with supermodel Anna Bayle, we had the chance to nag again about the color, this time Anna. “It has no name,” Anna dismissed our curiosity. “It’s patented.”

We call it the Peninsula cream.

The Peninsula is one international hotel chain that uses wood exquisitely, whether it’s Beijing or Tokyo, be it light or dark wood. While other chains resort to the shine of granite or the industrial coldness of glass and steel, The Peninsula exploits the color, texture, patina and even intricate geometry of wood, the latter done to aesthetic perfection at The Peninsula Tokyo, for instance.

Still on design, it was The Peninsula Hong Kong’s Felix which introduced us to the whimsy and playfulness of restaurant design in the early ’80s. That was a different thematic design altogether.

At Spring Moon, we had the dim sum combination, the Deluxe Dumpling with Abalone in Supreme Soup, the Stir-fried Organic Hungarian Mangalica Pork Loin with Wild Mushrooms, Ginger and Spring Onion, the Steamed Bean Curd with Scallops in Black Bean Sauce, the Rice in Winter Melon Soup with Minced Pork and Conpoy, and of course, the Chilled Mango Pudding.

We wanted to leave room for what lay ahead across the island beyond The Peninsula—the 2015 Michelin-star Kam’s Roast Goose. (We did the next day.)

For the first time, we tried The Peninsula Spa, a feature that even regular Filipino travelers to HK don’t usually take advantage of. It is well-designed, perfectly lit, and most especially, has the most soothing scent—a sense of refuge that envelops you the moment you step in.

Before the massage, you can enjoy the sauna—let off steam before a view of the cityscape. The glass window that gives you a panoramic view of the city is anti-claustrophobic. Then relax in the recharging room, with its ergonomic beds that cradle your by now pliant body. It also has a calming sky view. We could stay on such a bed the whole day, if not for the massage that awaited us.

We had the one-hour aromatherapy body massage treatment, a deeply therapeutic massage using blends of essential oils, from citrus (detoxifier), energizing oil to dissipate jet lag, to a blend of tea tree and eucalyptus to improve one’s immune system.

How was the massage? We’ve always preferred the median between ultra-soft and soothing, and deep and stimulating. And that was what we got.

To us, the ultimate test of a good massage is how it puts you in that suspended state of consciousness. It doesn’t knock you out and leave you in deep slumber, but it also shouldn’t keep you wide awake and tethered to your pressing concerns.

This massage left me in a dreamy state—total relaxation, in short.

The menu of massages and treatments is varied enough to fill a handbook—from the hotel’s collaboration with Ayurveda Aromatherapy to Sattva Shirodhara with Facial Marma Therapy (the ancient technique of pouring oil on the forehead), to anti-aging facial or maternity massage.

Bidding goodbye to The Peninsula, this time around, proved unforgettable.

We got a call from our friend in Manila that she had forgotten something precious in her room at The Peninsula the week before, and that the hotel manager would give it to us. Could we please receive it and bring it home intact, she asked.

Actually the hotel staff made her choose—they could turn it over to us, or they could wait until her next visit. Our friend decided that we should bring it.

So on the lobby, as we prepared to leave, the hotel manager walked up to us and handed us this envelop. Of course, before we signed the receipt slip, we opened the envelop before the manager to see its content.

We could only gasp in awe. Precious indeed. And the staff kept it for this woman, a most valued client.

Now that is even several notches higher than the quiet efficient service Cordero was telling us.

That is invaluable trust in a luxury setting.