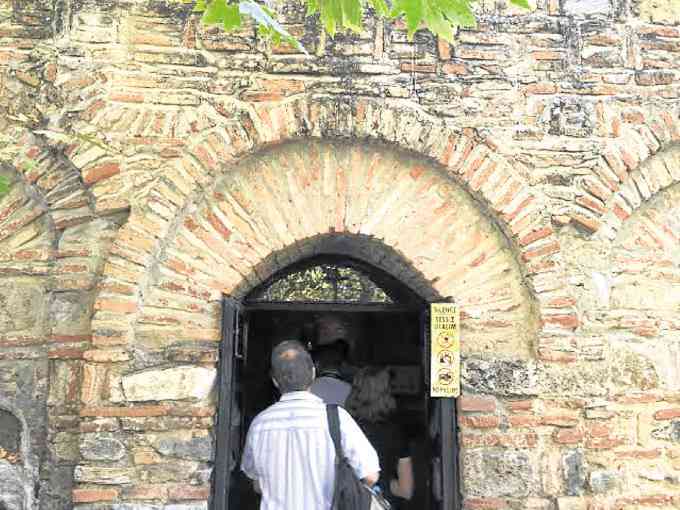 The House of the Virgin in the Land of Islam

One would hardly think of Turkey as a pilgrimage destination. Travel books say that it is 90 percent Muslim and you would realize that as soon as you tour Istanbul. We were able to locate only one Catholic Church in one of the alleys.

But strangely enough, during a trip to Turkey with Fr. Domie Guzman and pilgrims from Arlina Onglao’s Journeys of Faith, I saw some very marked Christian influences in this country, most particularly the presence of the Virgin Mary.

Mary seemed to be everywhere, in a land where there were more mosques than churches. According to our guide Hakan, himself a Muslim, this is hardly surprising. Mary’s name “Meryam” appears in the Koran. She is the only woman to have her own sura, or chapter in the Koran.

House of the Virgin Mary

From a short tour of Istanbul, we journeyed to Kušadasi. Half an hour’s drive away from Kušadasi or approximately 27 kilometers we visited a place that is known as Meryem Ana, the House of the Virgin Mary.

One version of Christian tradition states that, after the Crucifixion, St. John (the Beloved) took the Virgin Mary, entrusted to him by Jesus as he hung on the cross, to Ephesus. Here she lived for more than a decade before dying at the age of 64.

The fact that the Third Ecumenical Council was held in Ephesus (AD 431) in the first church dedicated to Mary, gave strength to this tradition. It was also during this Council that Mary was officially named Theotokos, Bearer  of God.

In 1891, based on a dream of Katherina Emmerich, a German nun, Lazarist priests identified this as the house where the Virgin Mary spent her last days. According to Hakan, it is interesting to note that this is a place that is also held sacred by the Muslims.

Pope Paul VI visited this place in 1967 and every year during the feast of the Assumption on Aug. 15, ceremonies are held attracting numerous pilgrims to the site. On the first Saturday of October, many pilgrims (not just Catholics) flock to the site to commemorate the anniversary of the Vatican consul meeting registering the place’s pilgrimage status.

A mystical atmosphere embraced us as we climbed to the peak of the mountain.

We drove along the steep slopes and mountain roads to Mary’s house that stood on the mountain about seven kilometers from the ruins of Ephesus. The hill slopes steeply toward Ephesus.

The property revolves around a cross planned chapel with a dome. Mosaics are said to have been discovered beneath the house dating to as far back as the 1st century AD.

We entered the cross-shaped chapel and whispered our prayers. No photography was allowed inside the chapel.
Outside, I noticed frames showing excerpts from the Koran that spoke about Mary. As we emerged from the chapel, the beauty of autumn flowers and foliage basking in the sun and spilling over the hills fascinated us.

We made our way to the area where the miraculous spring is found. The House of the Virgin Mary has been attributed with several cures for ill patients through the use of ashes from its fireplace and water coming out of the spring beneath her room.

There was also a wall filled with strips of paper containing petitions from thousands of pilgrims who visit this place every year. It was my birthday, and it was a most reassuring and memorable experience to celebrate mass in a place where you are not scared of persecution despite the seeming disparity in religious beliefs.

As we left the place, I realized that in a uniquely hopeful way, the presence of Mary also mirrors how people of different faiths can peacefully and respectfully coexist.

Because of what I saw and experienced in Turkey, I am convinced that there is something in one’s faith in Mary that unifies and inspires generations. Perhaps that is why even among other faiths, she is hailed as one that is “full of grace.”

Journeys of Faith takes its pilgrims to Turkey, Greece and other destinations this year. It has lined up pilgrimages to Marian and famous sites in Europe and the Holy Land. It has also scheduled a pilgrimage to the Adriatic Coast and Medjugorje where approximately 30 million devotees of diverse faiths and nationalities have converged in prayer for the past three decades.