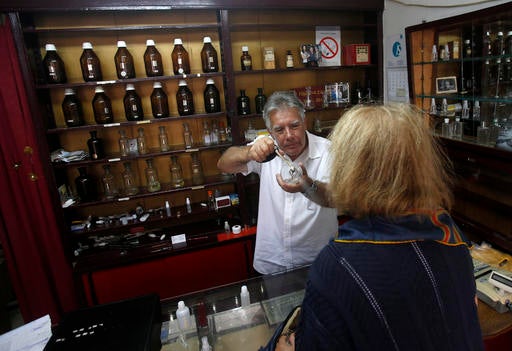 In this photo taken Monday, Aug. 8, 2016, perfumer Nenad Jovanov, center, sprays perfume on a customer in his small perfume shop in Belgrade, Serbia. The Sava Perfumery is the only one of its kind still remaining in Belgrade _ a small family business of home-made perfumes and other beauty products, the sort that once thrived here but have vanished as mass production has taken over. (AP Photo/Darko Vojinovic)

BELGRADE, Serbia — On a cobblestone street in central Belgrade, amid designer boutiques and trendy snack bars, stands a small perfume shop that is the last keeper of a dying craft and a witness to the Serbian capital’s turbulent history.

The Sava Perfumery is the only one of its kind still remaining in Belgrade — a small family business of home-made perfumes and other beauty products, the kind that once thrived here but has vanished as mass-production has taken over.

Set up shortly before World War II, the perfumery has held on through the German Nazi occupation of Belgrade, the postwar Communist era and the 1990s bloody breakup of Yugoslavia.

Nowadays, the small cherry-red shop still seems to defy time — its wood-rimmed shop window displays old glass jars, small perfume bottles — one of them in the shape of Paris’ Eiffel Tower — and black-and-white photographs behind the blurred glass.

The perfumery’s old, slightly crooked door opens with a squeak, a door bell announcing a visitor. Behind the counter, a gray-haired man wearing a spotless white shirt greets the customers.

Almost everything inside Jovanov’s shop dates back to the time when his father and uncle first opened in 1941, just months before the Nazi occupation of Belgrade began. Old wooden shelves are packed with glass bottles of all sizes and perfume-making equipment, an ancient lipstick-making machine is kept in the backroom.

Jovanov’s uncle and father had started out ambitiously, creating a perfume line dubbed “L’amour” along with a series of French-style beauty products for glamour-hungry Belgrade ladies. The war soon imposed a totally different reality.

“Many times, my father and uncle had to trade our products for cheese, eggs or a chicken,” Jovanov said. “It was pure survival, we had to eat.”

Testifying to the German occupation period is a small, grayish-green French military typewriter that a German soldier sold to Jovanov’s uncle claiming it had been confiscated at the Maginot frontline following the French surrender.

“I would like these things to go to a museum one day. It would be a great pity to see them lost,” Jovanov said.

Tough times did not end with the war.

The Communist authorities closed down the shop in 1948 as part of a wider ban on privately owned businesses, and the Jovanovs had to rely on the help of relatives until the authorities in 1954 allowed them to reopen the perfumery. The business boomed during the 1950s and ’60s, while there was still no mass production.

Jovanov, who was born in 1949, played in the shop as a small boy and slowly learned the craft.

“I spent my childhood and earned my first pocket money here,” he recalled.

Jovanov still mixes scents the old-fashioned way — adding various ingredients to the perfume base that he purchases from perfume producers. Long measuring tubes and bottles of all sizes capped with filters fill the working counter at the back of the perfumery, where Jovanov adds minute drops until he gets a perfect mixture.

Once a customer picks a scent, Jovanov fills a small bottle and offers a free spray to go, using a 1930s sprinkler. The next time, a customer can save money by asking only for a refill.

“I enjoy everything here, I could talk to Mr. Sava for hours,” said Vera Brankovic, an elderly Belgrade woman referring to Jovanov by the shop’s name — a common mistake that he does not object to. “This shop has a soul. I could never return to the modern shops.”

For a couple living in Australia, the Sava Perfumery presented a curiosity and an opportunity to get a professional’s advice about the kind of perfume that would suit them.

“It is unique to be able to choose your perfume like this,” said 42-year-old Rosanda Kovacevic.

Jovanov said he finds it very hard to run a small business in the era of mass production. Ingredients, bottles and anything else he needs for the perfumes are almost impossible to purchase in small quantities, and there are no other shops to chip in — they all closed down during the crisis years in the 1990s when Yugoslavia broke up in a series of bloody conflicts and Serbia was placed under international isolation.

“My colleagues sold their shops to more profitable businesses such as betting or mobile phones,” Jovanov smiled.

Jovanov said that his craft has been erased from the state register, listed as “other products” or soaps and detergents. Asked whether his son plans to take over one day, Jovanov only smiled.

“He is more than welcome,” he said.