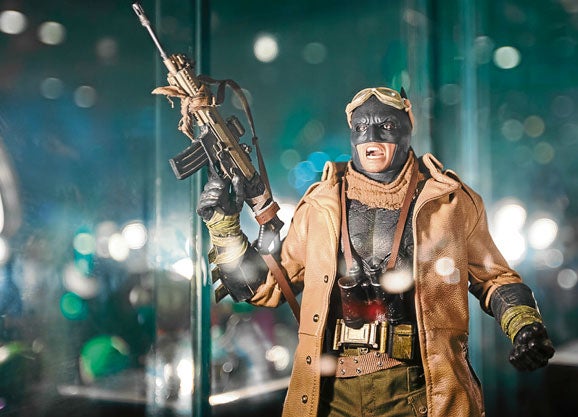 As AsiaPop Comicon Manila continues to evolve into the biggest pop culture event in the Philippines, it is also upping its merchandise game.

Beyond the booths offering freebies like stickers and T-shirts, AsiaPOP is setting the stage for growth by offering items you can only buy at the yearly event. It’s truly becoming something to go to AsiaPOP for aside from the Hollywood guests.

At an event where you could watch pro wrestlers do their thing and experience virtual reality at the Smart booth, one could indulge in your collecting itch for LEGO building sets, Tomica miniature cars or toys of all sorts.

Among the most popular booths was Tokidoki’s colorful spot, where Tokidoki founder Simone Legno made a much-anticipated return appearance, ready to sign whatever Tokidoki item you had for him. The AsiaPOP exclusives were flying off the shelves: the Unicorno Metallico Series 1 Blind Boxes, the Moofia 3-Pack and the cute Platinum KittyPatra.

One of the best features of AsiaPOP is the Ban Kee booth promoting the Bandai Gundam plastic model kits (Gunpla). If you sign up and sit down at the booth, you will be given a 1/144 Gunpla snap-fit (no glue) kit and, if you finish it, you get to keep the kit.

Each day featured a different free kit (the Gundam 00 on Friday, the Gundam Exia on Saturday and the Strike Gundam on Sunday), which meant you could visit the booth every day and get a different kit to take home.

The most unusual but also popular item for sale was Jollibee (yes, that Jollibee) Fun Catcher. It’s essentially a small Jollibee-theme claw machine that you could fill with whatever small items like pieces of candy and have your kids simulate the arcade experience.

The Fun Catcher itself was only P150, and soon, you would see every other parent that attended AsiaPOP carrying one.

Nostalgia and awesomeness marked the V formation at the Giordano booth, which was celebrating the 40th anniversary of the single most important animé series ever shown in the Philippines, the super robot series “Voltes V.” Giordano featured various limited-edition pieces of apparel and even had an impressively kitted-out Voltes V cosplayer fronting their display.

This year’s AsiaPOP featured a bunch of items you could get signed by the visiting artists, among them the amazing Mike Zeck (“Secret Wars”), Billy Tan (“Green Lantern”), Jason Palmer (covers for all sorts of titles), Ken Lashley (“Black Panther”), and Filipino comics superstar Whilce Portacio (“Wetworks”), who is always warmly received by AsiaPOP’s Filipino audience.

Carlo Pagulayan led a contingent of local artists who were visited by waves of visitors, particularly on Saturday and Sunday.

Whether it be heavily discounted trade paperbacks, new toys or just the sensational sight of so many guys dressed in a universe of costumes, AsiaPOP Comicon Manila has etched itself into the schedule of any proud Pinoy geek. Imagine what we’ll get next year.