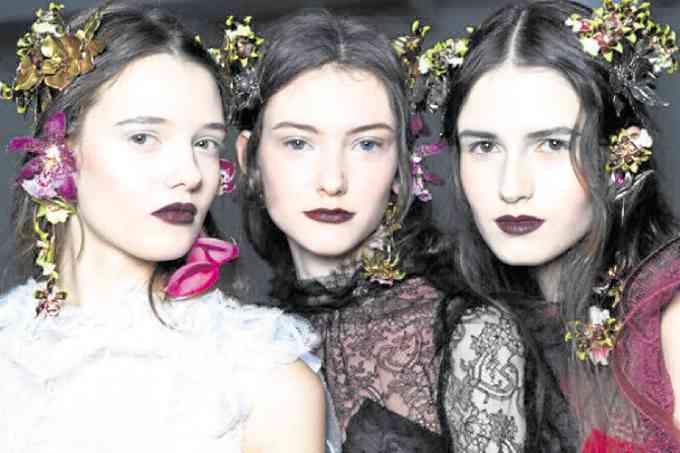 September in the Philippines heralds the Christmas holiday season whose design motifs are characterized by sparkle and shine.

But for cosmetics, September is the debut of the dark lip. True blue goths wear it 365 days a year, but the rest of us part-time: “The Craft” wannabes whip out the dark lip when September rears it pumpkin-spiced head.

When the turtlenecks (in cotton, not wool, I hope) make their way onto the racks of almost every high-street retailer, it’s pretty much time to stow the self-tanners and summery lipsticks and make way for more dramatic hues.

A dark lip is an easy fix: it’s dramatic, doesn’t require much accompanying makeup (in fact, it looks best with minimal accompaniment) and makes an impact without much work required.

It also functions as shorthand, telling the viewer: “Look, I’m a badass” or “I weave spells during my free time” or “Don’t mess with me, I know jujitsu and voodoo.”

The dark lip shares a common history with plenty of cool girls: Fairuza Balk and Madonna (during her ’90s phase).

For the 2016 Fall/Winter shows, the trend was seen on the runways of Louis Vuitton and Rodarte.

At Rodarte, tousled hair festooned with flowers, both fresh and gilded, contrasted sharply against a pale, almost chalky foundation, with some highlights to define the inner eye and cheekbones. Here, the dark lip, in a velvety matte finish, met its match with defined brows.

At Louis Vuitton, pale makeup with barely-there brows juxtaposed against a creamy dark lip offered an interesting counter to the rest of the looks at fashion week. With statement earrings offering the only accompaniment, these girls looked both tough and no-nonsense.

On the other end of the spectrum is Pat McGrath’s now-cult glittery ruby lip. McGrath, who is considered one of the leading makeup artists in the world, has developed the look of almost every runway or campaign of note.

Now with her own cosmetics line, McGrath’s latest release, which just debuted at select Sephora stores last Sept. 8, consists of an 11-piece kit that includes several lip colors (she often pairs two shades, either combined or layered for dimension), gloss, gold powder and that super fine glitter. The 11-piece kit retails for $150, but she also sells single lipsticks at $25 a pop.

“It’s quite funny, trends come and go, but the return of the lip in all its forms has been such a thing,” McGrath tells Vogue. “I wanted to create the ultimate editorial kit that takes you from nothing all the way to the most extreme, jeweled, three-dimensional mouth.”

The makeup artist often layers two hues, then brushes on the fine glitter to create a mouth that shimmers and glitters, almost like ornate jewels.

Though I’ve only seen it on video, the effect is hypnotic and straddles the line between festive and editorial.

How to wear it now

For those wondering how to incorporate these looks for the holiday season, it’s pretty easy.

With a dark lip, go easy on the blush and contour. Best to combine equal amounts of foundation and moisturizer for a dewy finish. (Or if you don’t like foundation, simply skip that part.) Then go for a dark lip.

Go for black, like Make Up For Ever’s Artist Rouge, or if you can’t, seek out oxblood or dark, purplish tones. Shiseido’s Rouge collection has a few offerings in deep red, while MAC Diva comes in a matte dark purple.

Pat McGrath’s shimmery lip is trickier. It is clearly not an office or day look. (But if that’s how you roll, then more power to you.)

This requires minimal makeup, because the lip itself is such a statement. Some girls who’ve tried it claim that the glitter can stay on for hours but requires a lot of maintenance: drinking from straws, eating with a fork (no messy burgers) and can easily get sponged off on a collar if you’re not careful enough.

But if the effect is as magnetic and powerful as some of the images and videos floating on the internet have led us to believe, then I think it’s worth all that effort.