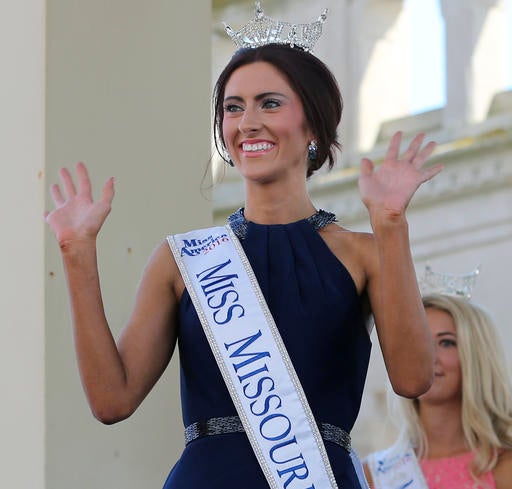 In this Tuesday, Aug. 30, 2016 file photo, Miss Missouri, Erin O'Flaherty waves as she is introduced during Miss America Pageant arrival ceremonies in Atlantic City. After competing in pageants for generations in the closet or working behind the scenes, gays and lesbians finally get to see one of their own take one of pageantry's biggest stages. O' Flaherty, will compete for the Miss America crown on Sept. 11, as the first openly lesbian contestant. AP FILE PHOTO

WASHINGTON—“Trailblazing” doesn’t typically come to mind when describing beauty pageants. But that’s how one contestant in this weekend’s Miss America pageant is being characterized.

Erin O’Flaherty, the first openly lesbian Miss America contestant, is one of 52 women hoping to win the crown on Sunday.

“It was a little bit scary,” the 23-year-old told People magazine about the decision to declare her sexuality for the contest, “but there was never going to be another decision that was made.”

Raised on a farm, O’Flaherty began competing in pageants five years ago as an 18-year-old student at the University of Central Florida, she told the magazine. She is representing the state of Missouri in Sunday’s pageant.

Reactions to her taking part in Miss America “have ranged from vicious and hateful to supportive and joyous,” she said in an Instagram post.

“At times, I’ve wanted nothing more than to protect myself and hide from the attention. But what change would that inspire?”

The most storied of US beauty pageants, Miss America earned some of the country’s highest TV ratings when it was first broadcast during its heyday in 1950s. More recently, it and other beauty pageants have been increasingly criticized as sexist and outdated.

Miss Teen USA got rid of its swimsuit contest during its competition in July.

She was forced to relinquish her crown when it became known that she had posed nude for Penthouse magazine.

Former Fox TV news anchor Gretchen Carlson, Miss America in 1989, made headlines this week by winning a $20 million settlement after filing a sexual harassment suit against her onetime employer.