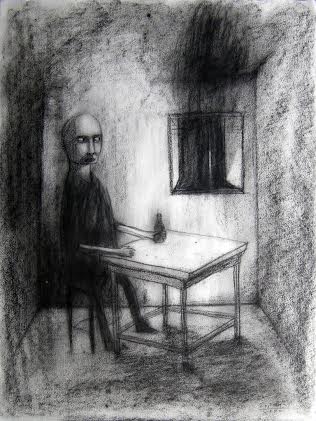 AVANT Auctions, the Philippines’ first online auction house, will hold its “Autumn Auction” on Sept 17, with 88 lots to be bidded out. Some of the more notable ones are:

In this haunting anti-portrait, Ventura interrogates the everyday horrors that confront the cosmopolitan subject as a laboring commodity.

The National Artist is well-known for his studied sense of minimalism, often relying on a simple aesthetic of strategic linearity. Here, those lines come together to form rare supple bodies that that pay homage to feminine strength and beauty.

Tapaya’s visual imageries are borne from mythic universes, and this early work, drawn in charcoal, is simple at first glance yet storied in its multiple subtexts featuring a seated character, perhaps deep in thought, despair, or both, who ponders upon some unspoken malady over a bottle beer.

Many students of art will remember this piece from their art history classes. This exceptional nude, drawn by the master figurative painter and national artist a few years before his death in the early ’80s, appears in the books “Art Philippines” and “Manansala Nudes.”

The artist-philosopher and art academic mentored ad inspired many of today’s well-known contemporary artists. He championed conceptual art, and this pair of abstracts affords us with a rare insight on the profound workings of his creative mind.

In this seemingly whimsical piece of auto-vandalism, the artist questions not only the value of art and its tenets but also the many traditions that divide and define the production of art.

Esquillo’s quirky megaphone toy series was part of his acclaimed collaboration with Secret Fresh in 2015. Work for auction is an interpretive rendering of the power of culture and influence, a rundown of the cacophony of voices that can drown understanding, seduce mass hysteria or liberate the mind.

Barrioquinto’s fascination with animals is his way of dissecting the human condition, our pretensions and maladies. Here, a wolf appears human-like, tamed in hipster fashion. Or, is it a man masked as a wolf?

Lao’s works are always invitations to serenity. This rare composition on burlap is an interesting foray by the master abstractionist in the use of mixed media, adding another layer of meaning to his simple but profound creations. 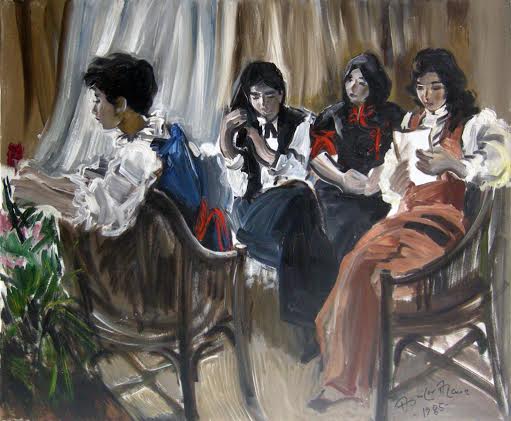 The National Artist adds a fourth woman to his famed “Tres Marias” series, a rare but welcome deviation from his signature triad of costumed woman. The resulting composition is striking, strong and solid.