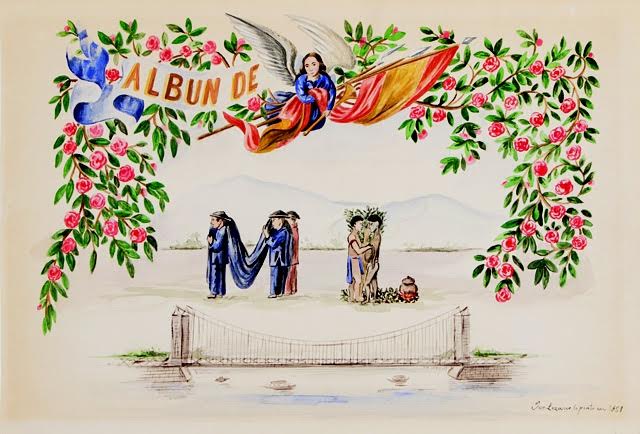 A highlight of Salcedo Auctions’ “The Well Appointed Life” auction on Sept 17,  2 p.m., at the Penthouse of 8 Rockwell is an extremely rare set of 12 watercolors by the 19th-century Philippine artist José Honorato Lozano.

Lozano (1821-1885) is known today as the visual chronicler and ethnographic painter par excellence of life in the Philippines in the second and third quarters of the 19th Century. He is also renowned as the father of the art form known as letras y figuras, mostly watercolors on Manila paper that depict views of quotidian Philippine life in the 19th century, wherein the artist ingeniously and meticulously painted what on close scrutiny appear as human figures and their environs (houses, flora, fauna, work tools, produce, etc.), but when seen from a distance spell out names or words.

The ML Album’s provenance can be traced to one of the grandees of Spain. ML was an important businessman based in Andalucia who traded in sugar and textiles. Due to his business successes and charitable works, ML was conferred the title of marquis by Queen Isabella II in the 1860s. ML never set foot in the Philippines and therefore did not commission the album. It was a gift from a Philippine sugar producer and business partner.

An important feature of this album is the existence of an “ML”  letras y figuras as the first page of the album, featuring fishermen holding a fishnet forming the letter M and two Igorrotes conversing beside a cooking pot forming the letter L. The Puente Colgante de Manila serves as a backdrop, and on top an angel carries the flag of Spain.

Another interesting feature of the album is that, with the exception of one sheet, all the works are either signed, or signed and dated. Two of the most outstanding paintings are “Carruaje de Alquiler” (Carriage for Hire) and the “Entierro de un Parbulo” (Funeral for a School Child), where a band in colorful attire is featured playing lively music while the child is dressed like a bishop or a saint and paraded on the way to the cemetery. This particular scene is borne out of the idea that when a child passes, he goes straight to heaven, thus a cause for celebration rather than sadness.

The return of the ML Album to the Philippines is a cause for joy, especially since there are very few surviving mid-19th century Philippine artworks in the country and even less works by this artist whom Rafael Díaz Arenas praised in his book “Memorias Históricas y Estadísticas de Filipinas” (published in Manila in 1850): “There is a landscape painter using distemper, who is also a watercolorist without rival in the country… I speak of Lozano.”
Bidding for the album starts at P5 million.

For more details and the online catalogue, visit salcedoauctions.com.