Up and down the ‘Gullet’ | Lifestyle.INQ ❮ ❯ 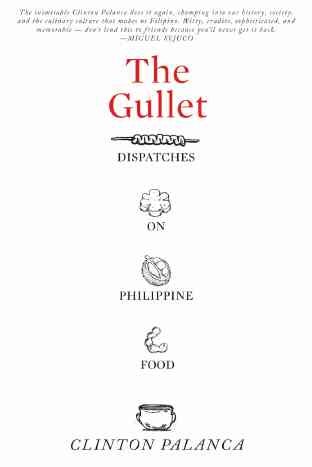 Up and down the ‘Gullet’

Saying that Clinton Palanca writes about food is kind of like saying Marcel Proust wrote about remembering stuff.

Palanca brings an entirely unique skill set to food writing: He studied at Le Cordon Bleu, studied sociology at Oxford, ran his own restaurant and is an award-winning fictionist.

But what is evident in his newest book, “The Gullet: Dispatches on Philippine Food (Anvil Publishing Inc., Mandaluyong, 2016, 185 pages) is that Palanca has situated himself at the parapets of Philippine food writing. Palanca is, of course, the Inquirer’s resident restaurant reviewer, but his writing goes beyond the sit-down and what-now aspects of dining.

In “The Gullet,” a gathering of his food writing, Palanca not so much discusses the idea of food as tries to pass it on to readers, as a highly conductive material would with electricity. He writes about what possibly happens before, during and long after the anticipated meal.

He discusses the distinct challenges and consequences of being a food writer—something many people think is a fantastically easy vocation because, dude, anyone can eat, right—particularly in the exquisite piece “The Art of Criticism.”

In the following chapter about the world of food are fine finds, notably the interview with the great travel writer Pico Iyer and Palanca’s own recollections of living in London.

But the great focus of “The Gullet” is food in the Philippines, and Palanca circles the topic like an archaeologist circles something he dug up. He situates Filipino food in the context of world cuisine. He ponders the origins and influences of Filipino cuisine, traveling back in time to partake of the feast at the Malolos Banquet in 1898, and then the evolution of our cuisine, all the way to Madrid Fusion.

He says what’s on his mind about what’s at the tip of his tongue, and is unafraid to explore the whole range of food available to him, writing about all that’s up and down his gullet. His ability to articulate what’s on his mind and in his tummy makes “The Gullet” shine.

He doesn’t keep anything down; his opinion, whether tart or sublime, cuts through the other flavors. He channels his restaurant reviewer self to issue this plea: “If you taste mediocrity and feel robbed after a meal, or you feel you’re eating hype instead of soul, walk away and don’t come back.”

Palanca fuses intelligence and introspection with the sensual and savory: “The respect, devotion, and attention we give to Filipino food at home, the fulfillment and delight we take in making it and expanding its boundaries—whether cooking at home or as expatriates abroad, our uncompromising pride in how it is satisfying as no other food can be: these, more than anything, are what will make the rest of the world give us the respect and attention that we wonder why we’re not getting.”

This equipoise between the pinnacle and the practical, the balance between the thought-out and the tasted, this is what makes his food writing special.

No one is doing what Clinton Palanca is doing right now, and that makes “The Gullet” one of the year’s best books.

“The Gullet” is available in paperback in National Book Store.