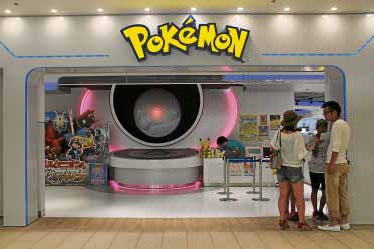 Sunshine City, Tokyo—The name sounds like one of the towns you could find on your PokeNav, where the rest of your Pokemon journey awaits. Sunshine City, in the heart of Ikebukuro, Tokyo, houses the largest Pokemon Center in Japan.

Entering a Pokemon Center isn’t really how you wish it was—something similar to the Nintendo games.

There are neither Chanseys waiting on the counter to collect your Pokeballs to heal your Pokemon from battles, nor computers where you can store or trade Pokemon that you caught. It’s more like a PokeMart that takes care of (almost) all your needs as a Pokemon freak.

Since two generations have grown up with Pokemon, it’s no surprise that Sunshine City draws an average of a thousand visitors every day.

Just hearing the Pokemon Center song—or the same music that your Nintendo blasts when you go to a Pokemon Center in whatever game version you’re playing—is enough to get you overexcited even if you are still a few shops away.

The catchy tune has a surreal feeling, and you don’t have to be shy to hum along to it—everyone else does.

The place has rows and rows of shelves filled with different Pokemon waiting for you to catch them with your shopping basket. Majority are 6-inch plush toys, purposely chibi-size to magnify their cuteness but small enough to stash in your luggage.

There are 3-inch key chain Pokemon plushies which you can latch on your backpack for everyday adventures.

Majority of the characters available in the store belong to the new generations of Pokemon—Froakie, Piplup, Zorua, Chespin, Meowtastic and Vanillite.

But items that bore designs of such Pokemon as Farfetch’d, Dratini, Ponyta, Lickitung, Seadra, Starmie, Staryu and Sandshrew were as uncommon as spotting them in the virtual reality game Pokemon Go.

Although there was a Snorlax item, it was only in the form of an Otedama piece—the traditional Japanese juggling game played by young girls.

Apparently, majority of the items have Pikachu designs. The electric mouse Pokemon is arguably the most popular to fans, and has been one of the most enduring characters in the cartoon series (because Ash’s Pikachu still refuses to evolve since 1997).

There were also Pikachus dressed up as Mega Ampharos, Mega Manik and Mega Lopunny for their current collection.

Its business model is similar to fast fashion—what you see on the shelves now isn’t what you’ll find on your next visit.

Each Pokemon Center also boasts exclusive items. So, think twice before letting go of an item. You can make a final decision right on the counter to play it safe. Just don’t let any regrets haunt you in the future.

Mainstay items are the two-foot-high plushies of the first-generation starter Pokemon—Bulbasaur, Squirtle, Charmander and Pikachu.

Gachapon and coin press machines, as well as arcade consoles, are likewise available in the Pokemon Center. For 300 yen, you can get small toy figures, enamel pins and key chains in gachapon containers.

The center’s staff members are all Pokemon geeks. Along with their respective nameplate, they wear an additional tag which indicates what their favorite Pokemon is—easily a conversation piece if you happen to share the same fondness.

Okawa, who manned one of the cash registers, had an unusual-looking badge that pin hoarders and Pokemon collectors alike would love to score. He was the only one in the store who had it pinned proudly on his shirt.

At the center of the badge was a Pokeball, surrounded by tiny symbols that represented the 11 Pokemon types, and “Rules Expert 2016” inscribed on it.

Turned out that it was a special kind of badge that you can’t just buy anywhere—you had to earn it. Okawa said it proved your knowledge and expertise in the Pokemon trading card game. (Yes, that ’90s kid game is still a pretty big deal in Japan).

One had to memorize and understand the card game’s rules and its application on a play-by-play basis, as well as trivia about special cards and the game in general.

Okawa explained it was a badge you earn after taking an exam held only during summer and winter each year. He said he took the test in March in a batch of 10 people. Only three of them got the badges.

All Pokemon trading game enthusiasts are welcome to take on the challenge of proving they, too, are Rules Experts. The catch is that one must be fluent in Nihongo because the exam is in the Japanese language.