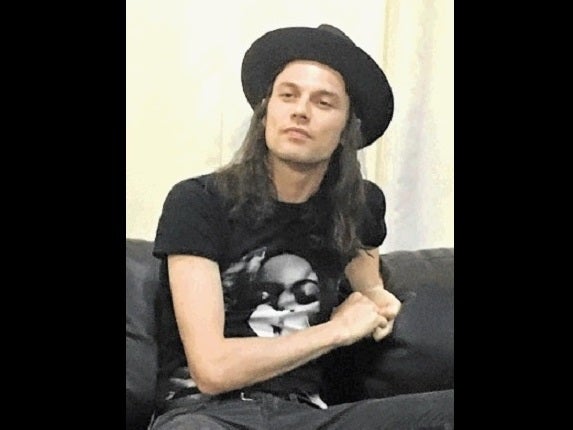 BRITISH singer-songwriter-guitarist James Bay at the “In The Mix” music fest. ANGELA IGNACIO

A Super moment with James Bay

From a small-town youngster playing in open-mic nights to rocking it out in arenas all over the world, British singer-songwriter James Bay has earned his stripes.

Breaking out in 2014 with the platinum-certified single “Hold Back the River,” Bay released his chart-topping debut album “Chaos and the Calm” last year, which also spawned the heartrending ballad “Let It Go.”

Inquirer Super and media members caught up with the long-haired, fedora-wearing Grammy nominee before he took the stage at the “In The Mix” music fest at SM Mall of Asia (MOA) Arena. Bay shared the bill with five other hot acts: The 1975, Panic! at the Disco, Third Eye Blind, Elle King  and Twin Pines.

Bay was “discovered” in his hometown when somebody shot a video of his performance and uploaded it on YouTube. “I did meet him on the night. I haven’t seen him since then,” Bay told Inquirer Super. “He was just at a pub after work and enjoyed what I was doing … I’d totally love to say hi. He’s been a big part of how I got here.”

It seems like we owe that gentleman a debt of gratitude for bringing Bay’s music to mainstream consciousness.

“When I see him, I’ll tell him and pass it on,” Bay said with a smile.

On the meaning behind “Chaos and the Calm”:

It’s a sort of metaphor for anyone and everyone’s life: personal experiences and a wider set of experiences. And I say that because the songs are about my own journey; they sort of reflect my own journey, my own experiences in life, but I kind of wanted to work with themes and stories that I felt had a universal thing that other people can connect to, as well.

In the more immediate sense, I didn’t want to use a song title as the record title.

“Chaos and The Calm” came up in a conversation. I was talking to somebody, and it was mentioned how, at that point, I was sort of working on writing and trying to deal with all this travel and being so far from friends and family. Who I was talking to, he was talking about how it has all become part of the chaos and the calm of the journey, and those words stuck with me. I remembered them again when it came to thinking of something to name the album. It just felt like it summed it all up.

On what he likes most about playing in intimate venues and how he brings it to the arena:

As much as anything, it’s about the connection with the audience. It could be as simple as having a moment, being eye-to-eye with somebody or with people in a song, between songs.

On his other talent:

I sketch all the time. It’s usually people. You have to be discreet, so they don’t catch you!

I’d love for my art to go with the music. One day. It’s just got to feel right. I could have done the album cover for “Chaos and the Calm.” I’ve certainly thought about it, but a photograph felt better. There’s just something about that little alley way, I don’t know.

On his musical influences, past and present:

Eric Clapton and Stevie Ray Vaughn were the people I fell in love with in terms of classic guitar, for that more intricate guitar work. But in a different way, it’s everyone from The Rolling Stones to Kings of Leon to even  Chuck Berry, for that sort of more rhythmic, rock and roll stuff.

But it isn’t just about that, it’s also about riffs and parts. That inspires me, too.

Then there are people like Ray LaMontagne and Ryan Adams; they make strumming two big acoustic guitar chords sound incredible, and that’s inspired me, as well. I kind of like all those things too much to settle for one, and focus on one.

On living in the ’70s with the rock legends versus being an artist, here and now:

Now. Always now, because this is my time. I’m inspired by that time and a lot of people are, but I don’t really know what it was like. I just watch movies and listen to records. I’d probably live now. Stay in the present.