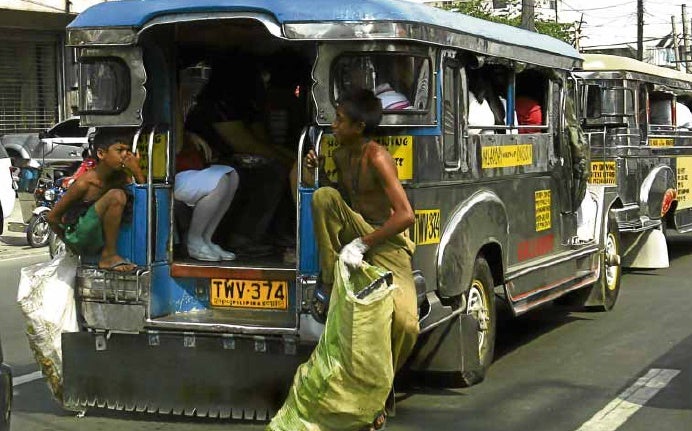 WITH the streets cleared of thugs and other unsavory characters, jeepneys now look like they’re a safer ride than they were a couple of months ago. However, there’s a fear—call it paranoia—that one might find himself in the middle of a shootout. INQUIRER PHOTO

In the wee hours of a weekday, commuters wait at the corner of Edsa Extension and Roxas Boulevard for a jeepney bound for Alabang.

As soon as their ride arrives, they pile inside and, almost by instinct, take out their mobile phones to while away the minutes as the jeepney driver collects the fare.

When the jeepney gets moving toward the Cavite Expressway, the passengers’ eyes are still glued on their phones; all of them look calm and collected, as if knowing that nothing untoward would happen.

This was not the case last year, or as recently as a few months back, when this same route was considered a high risk for holdups.

One late evening, as the jeepney approached Las Piñas, one of the passengers announced that we should stay alert, because two men had staged a holdup just the night before.

I myself had witnessed such incidents while riding those jeepneys; fortunately the petty criminals, whose looks fit the image of a “shabu” (methamphetamine hydrochloride) user, ignored me and instead trained their sights on weary, sleeping passengers.

That was enough to make me stop taking jeepney rides to Alabang, especially now that there’s Uber and Grab. But, what to do on days when I’m trying to scrimp on cash?

Peace on the route

Last month, I tried riding the jeepney again and was pleasantly surprised.

Apparently, the government’s ongoing war on drugs has virtually cleared the streets of thugs and other unsavory characters that prey on hapless commuters at night. Police visibility—the kind that creates an impression that cops are really out to serve and protect the people—has obviously discouraged holdups.

“That’s true,” said an officemate, who related that he had been noticing the peace and quiet on the route that he takes when going home to Bulacan.

It is said that most people who engage in stickups and robberies are jobless shabu addicts; they resort to stealing money to sustain their habit.

But now that being an addict is like having a death sentence, the thought of staging holdups for a quick buck is no longer an attractive option.

And yet there is a new cause for worry—at least for me whose job includes going out at night to watch concerts and gigs and visit bars and clubs—because this drug war has also caused the deaths of innocent people.

It has induced paranoia, the eerie feeling that, God forbid, I might find myself in the middle of a shootout. It is a recurring thought every night, as I cross the streets, even as a police car makes its presence known by its flashing lights. TVJ

17-year-old stabbed dead, robbed of cell phone by man aboard jeep in Manila

I can’t kill them all, says Duterte