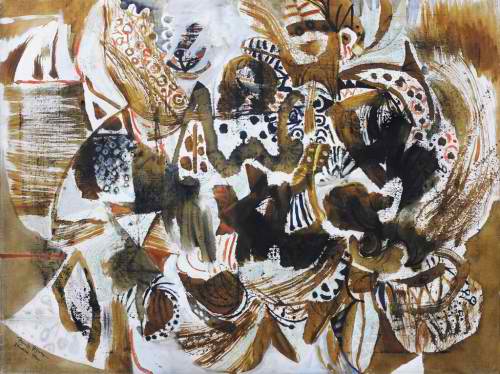 The image of the highly dramatic painting, which depicted the yearly “traslacion” or procession of the Black Nazarene of Quiapo Church around Manila and the frenzy of devotees shoving one another to get within touching distance of the famous ancient Catholic icon believed to be miraculous, graced the cover of the catalogue of the September auction.

Like the Quiapo devotees swooping down on the ebony icon, the highly colorful expressionist painting drew frenzied bidding.

A painting by Borlongan’s contemporary, José John Santos III, “Here and There,” originally exhibited at West Gallery in 2007, was sold for P9.34 million.

But the auction’s biggest bids were drawn by the masters, especially the late National Artists Carlos “Botong” Francisco and Hernando R. Ocampo.

Francisco’s 1945 oil-on-canvas “Kalantiao at Lubluban” fetched a staggering P30.37 million while Ocampo’s triptych, probably his largest work, collectively entitled “Passage” and individually entitled “I Am,” “I Love” and “I Was,” was sold for a whopping P23.36 million.

The four works were among 17 that were drawn from more than 150 lots available in the auction and that León presented in a “curated auction,” a first for the country’s nascent but dramatically growing auction industry.

The curated auction was also a homage to Joaquin, who will be marking his birth centenary next year. Villegas and Nakpil said Joaquin’s famous heroine in his first novel who claims to have “two navels” symbolizes the Filipino with two clashing legacies—Latin Spanish and Anglo-American—which altogether evoke the perennial Filipino problem of his alleged lack of identity.

“The curation tells a story,” León Gallery director Jaime Ponce de León said. “The curated segment… poses questions as to the true nature of Filipino art and identity, by presenting a dialogue between the most famous Filipino artists educated abroad and those equally influential but entirely home-grown.”

The invitation for the curated auction had a detail of Ocampo’s large work as icon.

“Acquired directly from the artist by the brilliant brain surgeon Victor Reyes in 1971, the work is fresh in the eyes of most collectors,” Ponce de León noted. “Never been exhibited nor published, the work is most interesting with the extant correspondence of Reyes and the artist that comes with it the detailed sketches and color guides used for the painting.”

Other works of masters in the curated auction likewise fetched very high prices.

Outside of the curated auction, another sought-after piece of Ang—the 1969 oil-on-canvas “Man in Motion”—was sold for a high final hammer price of P16.35 million.

Meanwhile, a small folk-Catholic medallion that was said to be the “anting-anting” or talisman that Andres Bonifacio used during the revolution got a final price of P642,000, six-fold of its starting bid.

A certificate awarded to José Rizal got P584,000, but the rest of the Rizaliana on auction, which included the German translation of “Noli Me Tangere” that was never published, received no bids.

Round dining table and dining chairs, made of narra and rattan from the 1920s, fetched P1.17 million.

Ivory Calvario in a Virina from the late 19th century was sold for P1.05 million. The encased figure contained images of Crucified Christ, the Mater Dolorosa or Sorrowful Mother and St. John the Evangelist and Mary Magdalene.

Although a few lots were not sold, including a few pieces from the Felipe Hidalgo Estate of architectural plans from the 19th century, Ponce de León said that the auction fared well.

“As a whole, the auction did very well and it reflects the vibrancy of the Philippine art market,” the León Gallery owner said.