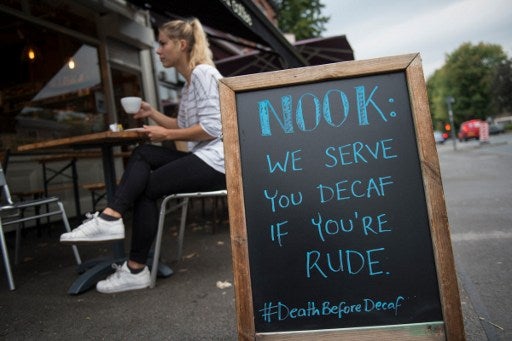 The Nook Neighbourhood Coffee shop advertises its coffee with a contentious phrase written on a chalk A-board outside the premises in Stockport, north west England on September 13, 2016. The daily grind of London commuting is being brightened by a collection of black marker pens and white boards -- giving city dwellers a welcome boost as they travel through the metropolis. The messages sometimes use humour rather than straightforward positive PR, such as one board outside a cafe in Stockport: "Come in and try the worst porridge that one woman on TripAdvisor had in her life". / AFP PHOTO / OLI SCARFF / TO GO WITH AFP STORY BY EDOUARD GUIHAIRE

LONDON, United Kingdom — The daily grind of London commuting is being brightened by a collection of black marker pens and white boards — giving city dwellers a welcome boost as they travel through the metropolis.

The hall of Oval underground station looks more like a living room than a Tube stop — complete with plants and a small library, while Beethoven’s “Piano Concerto No. 5” plays.

It is at this stop on the Underground’s Northern Line that Glen Sutherland, an employee of tube operator Transport for London (TfL), whips out a black marker and writes up the “Thought for the Day”.

Today the quote appearing on the large whiteboard — strategically positioned in front of the escalators used by thousands of people daily — is from Brazilian writer Paulo Coelho.

“There is only one thing that makes a dream impossible to achieve: the fear of failure,” it reads, written in fine writing which harks back to the books of centuries past.

The Oval station tradition began in 2004, as a way to brighten up the station and distract passengers — particularly during peak times when the crowded trains are akin to sardine cans.

“As you come up from the escalator you hear the music, you got the thought of the day, the books, the bench, you can sit down, have a read, take it easy.

“We should start serving coffee in there!” Sutherland tells AFP.

From Steve Jobs to Socrates

The TfL employee hunts down quotes on the internet, he says, wary of what should be avoided: “It’s a case of choosing them carefully, you can’t put anything political, sexist, religion.”

Sutherland often chooses positive messages for the “Thought for the Day”, encouraging those who may have got out of bed on the wrong side.

“When you arise in the morning, think of what a privilege it is to be alive, to think, to enjoy, to love”, is one example from Roman emperor Marcus Aurelius.

Oval’s whiteboard also provides advice and comments on society, such as this line from Oscar Wilde: “Nowadays people know the price of everything and the value of nothing.”

The quotes can also come from more unusual quarters, such as Yoda from the “Star Wars” films: “Train yourself to let go of everything you fear to lose.”

Occasionally “Thought for the Day” takes inspiration from news and current affairs, paying tribute to celebrities who have recently passed away such as David Bowie, Prince and Mohammed Ali.

There has also been encouragement for Team GB at the Olympics and a birthday message for Queen Elizabeth II.

The initiative at Oval has now spread to several other stations, with photos of the “Thought for the Day” being shared on social networks, and numerous bars and shops have also started sharing quotes and witticisms.

“Shoes: less money than a shrink,” quips a sign at one shop about the therapeutic benefits of shopping, while a pub warns “all hipsters must be accompanied by an adult”.

“Beer is the answer, but I can’t remember the question,” reads another pub sign, traditionally written in white on a blackboard.

The messages sometimes use humour rather than straightforward positive PR, such as one board outside a cafe in Stockport: “Come in and try the worst porridge that one woman on TripAdvisor had in her life”.

Mandy Miller, a specialist in calligraphy for blackboards, says the fashion for puns and funny comments has come with the growth of social media companies such as Twitter and Instagram.

“They rarely say anything about the pub they stand outside or what is on offer, but that’s almost irrelevant.

It’s the photo opportunity that they provide, people like to ‘collect’ and share them, therefore, the pub gets a mention in the post. The more clever and outlandish the better,” says Miller, who goes by the alias “Chalkboard Lady”.

Roberta Mussato, an Italian passing through Clapham North station which also boasts a whiteboard, is just one enthusiast of the “Thought for the Day.”

“Either they make you smile or they make you think. In any case it’s nice when you’re all in the rush and you just take five seconds to read,” she says, before getting lost in the fast pace of London life./rga