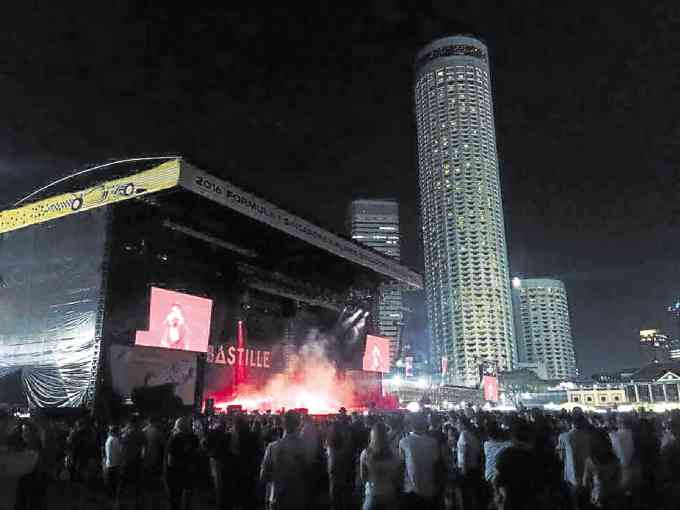 SINGAPORE—Now on its ninth year, the turbo-charged Grand Prix Season Singapore drew thousands of tourists over the weekend, as fans from all over the world got caught up in a frenzy of parties, music and, of course, fast cars speeding through the illuminated streets of the Marina Bay Street Circuit.

Rosberg, 31, led right from the start, with fans cheering loudly as second placer Daniel Ricciardo of Red Bull held his last-minute surge. Rosberg’s teammate Lewis Hamilton won third after a tight race with fourth placer Kimi Raikkonen of Ferrari, much to the delight of the fans in the stands, who kept shrieking as the cars zipped past.

Singapore Tourism Board chief executive officer Lionel Yeo, speaking to media and stakeholders at the start of the three-day race weekend on Friday night, pointed out three special ingredients that are key to the success of the Singapore Grand Prix: its uniqueness as the only Formula 1 night street race; the several entertainment and lifestyle options anchored around the Grand Prix; and the general celebratory ambiance of the entire F1 weekend, which featured not only the race and the music acts, but several dining options, art and photography exhibits, and retail promotions as well.

“All of Singapore throws a party for F1 weekend!” Yeo said. And what a huge country-wide party it was.

Australian pop icon Kylie Minogue set the mood at the concert stage in Padang for the weekend on Friday night, coming out in a red hot dress and captivating the audience with a glitzy stage design, costumed crew and dance moves.

“What do you mean, you’re used to this heat?” she asked while taking a water break. “I’m melting!”

Fans cheered as she asked if they knew her old songs, with some shouting, “Locomotion”—which she did. The audience sang along, as they did to “In Your Eyes,” “Spinning Around” and “Can’t Get You Out of My Head,” to name a few.

She closed the show with “All the Lovers,” complete with confetti, before doing an encore.

The following night, Bastille opened with cult favorite “Bad Blood” ahead of the qualifying races. The band’s hourlong set featured crowd-pleasers such as “Pompeii,” “Flaws” and “Things We Lost To the Fire,” as well as hits from its new album “Wild World,” which was launched just this month.

After the qualifiers, British rock legend Queen performed with “American Idol” finalist Adam Lambert standing in for its late great lead singer Freddie Mercury. For two hours the band played most of its classic hits including “Somebody to Love,” “We Will Rock You” and everybody’s winning anthem, “We are the Champions.”

She also paid tribute to the show’s main act, Imagine Dragons, with whom she has toured as a young musician. “A year ago,” she narrated, “I was just a girl on tour with this band called Imagine Dragons.” The crowd roared right back.

Halsey’s repertoire came from her album “Badlands,” launched just last year. “This song is a reminder that you belong to no one else but yourself,” she said before singing “Hurricane.”

She also rendered “Ghost” and “Roman Holiday,” as well as her collaborations with Justin Bieber (“The Feeling”) and The Chainsmokers (“Closer”).

On her last song, “Colors,” colored smoke blew onstage and confetti rained on the audience.

Imagine Dragons capped the Formula 1 festivities with a two-hour set highlighted by “It’s Time,” “Demons” and “On Top of the World.”

In between songs, frontman Dan Reynolds gushed about Singapore’s hospitality. “I got a massage from a very strong woman today,” he said, chuckling. “You can tell a lot about a country from how it gives massages.”

On one number, Reynolds called out a kid from the audience to join him. “This song is best listened to lying down,” he said to introduce “Hopeless Opus.”

As the night wore on, Reynolds took off his shirt due to the heat. The band closed with “Radioactive,” whose highly charged beats provided the apt ending to an adrenaline-filled weekend at the Circuit.