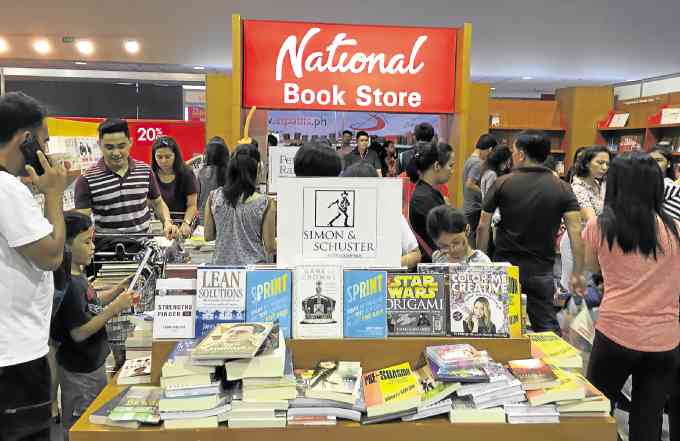 In past years, I had always gone to the Manila International Book Fair (MIBF) on a weekday. This time, someone dared me to get the “full MIBF experience” by attending on a weekend.

To describe the SMX Convention Center in Pasay City that Saturday as packed is an understatement. The MIBF that day was a sea of humanity.

The long lines going into the venue spilled out to the streets. Some exhibitors, Summit Media for instance, had to limit the number of folks entering their booths.

However, the large crowds could not discourage serious book lovers from finding much-coveted titles. So I rolled up my sleeves and joined the fray.

The most creative booth of the year (and the most Instagrammable, too) was that of Meganon Comics. The indie comics publishing outfit maximized its tiny square of a stall by putting fairy lights and hanging posters with some of the wittiest and funniest “hugot” maxims: “Isa kang Comic Sans, you should not exist”; “Issues. Minsan comics, minsan ikaw”; “Para kang deadline, laging hinahabol”; and my favorite, “Ang buhay palaging happy ending, so kung hindi ka pa happy, hindi pa ’yun ending.”

These weren’t some elaborate, design-heavy posters. They were just lines printed in black ink on pieces of plain white bond paper. It was simple but packed a punch.

Did you know that there were also shirts, tote bags and stationery at the MIBF? The National Historical Commission of the Philippines (NHCP) had patriotic graphic tees featuring national heroes José Rizal and Andres Bonifacio.

Comic Odyssey, whose booth was the most elusive at the fair (it wasn’t on the map, and I had to circle SMX three times before  finding it), sold back-issue floppies of “Batman,” “Avengers,” “Spider-man” and “Superman.” There were also “Buffy: The Vampire Slayer,” “My Little Pony: Friendship is Magic” and “Archie,” among many other titles.

Saturday was also Batman Day, and Fully Booked took part in the international day of celebrating the DC hero by dedicating lots of shelf space to comics featuring the caped crusader.

Aside from popular Marvel and DC titles, there were also hardback and trade paperback copies of Vertigo comics like “Preacher,” “Fables,” “Y: The Last Man” and “Sandman.”

One of the best buys at Fully Booked was the Penguin Little Black Classics, a collection of books featuring poetry, essays and short stories by Tolstoy, Austen and Dickens, among many others.

If you hankered for something lighter, there were also books written by the hottest voices in American comedy like Amy Schumer, Tina Fey, Mindy Kaling and Aziz Ansari.

The-Boy-Who-Lived continues to enchant his Filipino fans, judging by the number of people who hoarded the global best-selling fantasy series. Potter fans of all ages were fawning over the illustrated “Sorcerer’s Stone.” (I would’ve grabbed a copy, but a dude from Fully Booked told me that only the Bloomsbury edition was discounted. Boo.)

Speaking of “Harry Potter,” Fully Booked would have benefited from a bit of magic from the Potterverse that Saturday. The queue to the cashier was kilometric and snaked throughout the bookstore’s entire section, which was one of the biggest at the MIBF. Where is a wizard who can cast an Extension Charm when you need him?

The “Harry Potter” magic also lives on at NBS. I saw a girl contemplating on buying the “treasure chest” boxed set of the series. There was also a table piled with copies of “Harry Potter and the Cursed Child,” the special edition “Creature Vault,” plus “Fantastic Beasts” activity books.

It also had these lust-worthy leatherbound books with gold-gilded pages that collected the stories of Verne, Wells and Twain.

If you were a serious collector looking for editions of your favorite novels in the same aesthetic, NBS was the place to be. It had the John Gall-designed technicolor covers of Murakami’s backlist, the “specimen box”-themed covers of Nabokov’s bibliography and the doodle art covers of Kundera’s books.

“Star Wars” fanatics surely loved the hardbound edition of the original trilogy’s novelization. For those who wanted to indoctrinate their kids in the films’ philosophy, the “Jedi Academy” series and the “Star Wars”-themed origami book were perfect.

Even if the bookstore chain had the most expansive area at the MIBF, it was still brimming with people. Good thing NBS had the foresight to map out its floor plan and assign a specific area for the lines to the cashier.

The queues were still lengthy, but at least you wouldn’t be bumping against other patrons or blocking people who were browsing the shelves. What’s the point of a book fair if you can’t reach the books?

The MIBF this year was “Bookmageddon,” or, as my friend KB said, “Train to MIBF.” People literally had to elbow their way through the aisles and hallways. There might even have been some pushing and pulling involved.

It wasn’t surprising if we broke the laws of physics that day. No two objects can occupy the same space at the same time? Wrong. Apparently, five or six people can do it at the MIBF.

By day’s end, I came out of the book fair a sweaty mess. My stomach was growling, feet burning, shoulders aching. I probably lost a kilo or two.

But no rest for the wicked; like a crazy little bookworm, I did it all over again the next day.