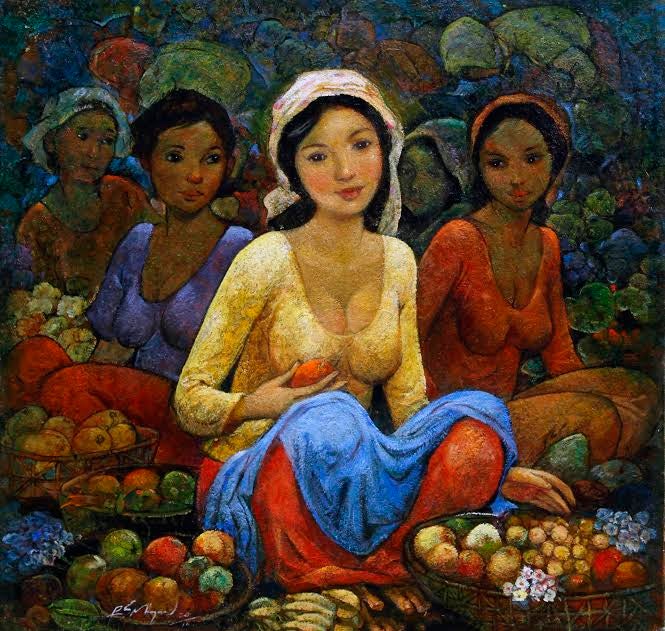 THE HISTORY of contemporary Philippine art is littered with names of artists who have not received their due recognition during their time for reasons.

However, it is ultimately the passage of time that gives the essential perspective necessary to objectively assess their place in Philippine art history. That, and the providential support of an ardent collector or benefactor who believes in their art.

One such advocate is Gallerie CMG, which will exhibit in the 2016 ManilArt the recent works of Tessie Duldulao and Roger San Miguel, whose strong suit is representation in still life and genre, respectively.

Tessie Duldulao, of course, labors unfairly against the name she bears by virtue of marriage, for Duldulao was once a byword in Philippine art publishing. It is after all an incontrovertible fact that it was the late Manuel D. Duldulao who wrote and produced the first coffee-table art book, titled “Philippine Contemporary Art.”

A graduate of the UP School of Fine Arts, she was contemporaneous, give or take a couple of years, with such artistic luminaries as Jose Joya (now National Artist), Juvenal Sansó, Larry Alcala, Rodolfo Ragodon, Hugo Yonzon, and yes—surprise!—Celia Diaz-Laurel and Jose “Pitoy” Moreno. They were under the tutelage of Dean Fernando Amorsolo.

Although it was in portraiture where Duldulao was first noticed, she has found her métier in still life painting, and not in traditional oils, but in pastels, a medium which she has brought to a high level of excellence, wielding its delicate, powdery substance as an instrument of light and shadow, fiendishly threading it through the most complex of elegant mazes, the interstices of the cut-open filigrees, and the spidery-thin passages that can literally stop the viewer on his tracks.

Of utter simplicity and formality is Tessie’s compositional construction, which some critical quarters may even scorn as repetitive and formulaic: an undeviating image of a table top, artfully draped with flowing folds of calado, the lacy native embroidered fabric, surmounted by a feast of flowers ranging invariably from daisies, lilies, amaryllis, carnations, to milfores, roses and gentle sprigs of baby’s breath, all accented or anchored in place by the presence of an Oriental plate or pottery.

Warm, tropical colors, too, were what attracted collectors to the art of Roger San Miguel. Little known is the fact that it was San Miguel who was chosen to recreate, based on an existing photograph, the large-scale Amorsolo painting “Dance,” at the Metropolitan Theater. Upon completion, “Dance” was proudly positioned and displayed on one end of the lobby, looking across its twin-painting “Music.”

Ironically, San Miguel’s works were exhibited in American and European galleries, way ahead of even more celebrated names in the contemporary scene. He has been recognized abroad for his impressive draftsmanship, chromatic flair, native range of charming subject matter, a universal appeal and a global market.

Because San Miguel concentrated on creating artworks for the international market, his name was neglected locally.

That situation, however, has been rectified by Gallerie CMG. In last year’s ManilArt, and a solo exhibition at the SM Megamall Art Center, San Miguel’s works were quickly snapped up by new collectors, as well as by past collectors, who were pleased to see that San Miguel has reemerged on the art scene.

Abiding in San Miguel’s art are the classic themes of Philippine art, but which the artist depicts at the junction of nature and nurture. Thus, the Mother and Child images unfolding from the bosom of the land and its plenitude of flowers and fruits, and the favored hues of greens, golden yellows and oranges, which are emanations at once of the seasons of the year and the human spirit.

At the ManilArt 2016, Gallerie CMG also introduces the sculptural works of John “Pope” Dalisay, Grand Prize winner in the 2016 GSIS and Art Association of the Philippines art competitions. The show also features the works of landscape artist Adler Llagas.