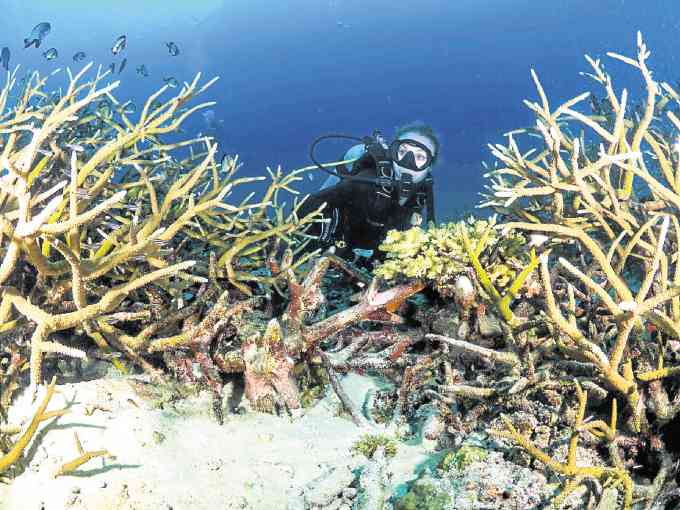 The Visit of Alexandra Cousteau has thrust Oceana Philippines, the two-year-old local office of environmental organization Oceana, into the spotlight.

“It has been inspiring for me to hear Alexandra talk,” says campaigns manager Danny Ocampo, who became the de facto underwater cameraman and photographer for this scion of environmentalist royalty during her trip.

“The things we do in a strategic way, she tells as an easy story that normal people understand. When you’ve been in NGOs so long, you get used to acronyms, jargon. The narrative is lost. It’s clear to us where we want to go, but we forget that we also have to tell our stories.”

Cousteau was the special guest at a media forum on the recent exploratory expedition to Benham Rise, led by Dr. Hildie Maria Nacorda of University of the Philippines Los Baños School of Environmental Science and Management.

“We get too technical,” seconds communications director Yasmin Arquiza. “How do we make sardines interesting?”

“We’re working on laws and policy in Tañon Strait,” continues Ocampo, referring to one of Oceana Philippines’ main campaign areas in the Visayas, the biggest marine-protected area in the Philippines but still a hotbed of illegal, unreported and unregulated (IUU) fishing. “But how do you make that sexy? For people in the city, eh ano ngayon?”

Oceana was founded in 2001, and is the largest international environmental organization focused solely on ocean conservation. Instead of launching programs with indefinite outcomes, the group runs strategic, directed, science-based campaigns within limited time frames, with quantifiable outcomes.

The flagship “Save the Oceans: Feed the World” international campaign underscores the group’s involvement not just in saving whales, for example, but in addressing fisheries that feed hundreds of millions of people every day.

This is particularly important in the Philippines. “Fish provides 70 percent of the protein requirement of every Filipino,” Ocampo notes. This is, in fact, Oceana’s first office in Asia, established only in 2014, reports Arquiza. “We’re small, but we have the 14th largest fisheries in the world—a big contribution for a small country.”

One of Ocampo’s targets is to get big supermarket chains to commit to selling only fish that has not been caught using destructive methods such as cyanide or dynamite fishing.

Benham Rise, the Philippines’ newest territory, has been discovered to be a rich fishing ground. As the first enviromental nongovenrment organization in the area, Oceana Philippines is pushing for the protection of the core zone for fisheries, rather than for planned explorations for mineral resources. “We need regulation, as well as a management framework,” says Ocampo.

“It’s overwhelming to have her here,” says El Nido’s director of sustainability Mariglo Laririt of her special guest. “The reputation of her grandfather precedes the entire family, but obviously, on her own, she is an ambassador calling attention to the sustainability of world fisheries.”

Laririt knows whereof she speaks; the biologist heads a unique, long-time environmental program in El Nido’s four resorts, all part of a Managed-Resource Protected Area declared by the government in 1998.

With its sustainability philosophy covering everything from sound environmental practices—zero plastic in the rooms!—to running a materials recovery facility, offering a green menu, and even giving guests a chance to fish with the locals, El Nido was the perfect place to wrap up Cousteau’s first (and not last, Oceana Philippines hopes) visit to the country.