Speaking out for the oceans | Inquirer Lifestyle 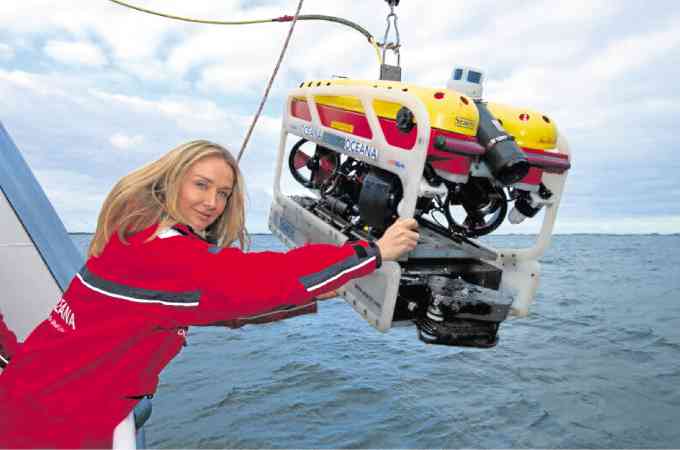 Speaking out for the oceans

During her Philippine visit from Aug. 29 to Sept. 11, Alexandra Cousteau swam with turtles in Apo Island, spoke before students at Silliman University in Dumaguete and the University of Cebu, met with (and obtained commitments from) government officials such as Vice President Leni Robredo and Environment Secretary Gina Lopez, and checked out an artificial reef installed by the El Nido Foundation in a previously dynamited area in Tres Marias, El Nido.

“I’ve felt really useful,” says the Oceana senior advisor and spokesperson, who captivated audiences wherever she went with her vast knowledge and insightful views. Some sound bites:

On what struck her most about the Philippines: “The Philippines has incredible beauty and extraordinary former glory, but the opportunity to restore that glory, that potential, is there. It’s an opportunity to bring back abundant fisheries… When I dive here, it’s so beautiful but I feel like we’re missing 50 percent of the fish. I feel that there should be so much more, it feels empty—and that’s kind of sad.”

On conservation: “We need to get away from the idea that conservation is just about not touching the oceans. Conservation is about restoring abundance and diversity that will feed more people, feed more marine life, and create resilience against climate change and ocean acidification that will hit the Philippines really hard.”

On working together: “Getting the right people engaged is a huge part of it. We have to make sure small-scale fisherfolk are represented; they’re not the ones plundering the ocean. We have to stop illegal commercial fishing, we have to source the fish responsibly. It’s been done before, it’s not a magic formula. Increase the MPAs (marine protected areas), stop bycatch, stop illegal fishing—et voila!”

On corruption: “When you apprehend illegal fishermen, they can’t say, ‘What? I paid the mayor!’ They should say, ‘Okay, I’ll pay the fine.’”

On human intervention in the ocean: “The Philippines has a lot of good scientists. We have to listen to what they say; we need to know where, and why, and how big. The oceans need all the help they can get. Putting artificial reefs down to add substrate in an increasingly acidic ocean would make it easier for corals to propagate. Most of us who love the ocean would love to just wave a magic wand, but that’s not where we are. So we have to do what we can to help these ecosystems recover.”

On dynamite fishing: “I would like the government and communities to come down on dynamite fishing as hard as possible. I understand that these people may not be educated and don’t understand the impact of their actions, but it’s so destructive and has such a broad impact on the community. It is one of the most grievous criminal acts.”

On Indonesian President Joko Widodo’s extreme practice of bombing and sinking illegal fishing boats: “I don’t espouse violence against humans—but there is some poetic justice in taking a boat used in illegal fishing and turning it into an artificial reef!”

On people being apathetic to environmental problems: “People say, ‘What I do doesn’t make a difference.’ But we’re seven billion people, and what we do does make a difference. We’re not allowed to say, ‘Nah, I don’t have to participate,’ or ‘Somebody else can do that,’ or ‘Recycling is such a drag.’ It’s an opportunity, not a sacrifice. We do so much for our children—put them through college, want them to have a wonderful future, opportunity, prosperity, health and happiness—but we do nothing to ensure that the place they will inhabit and call home and raise their own children in is a place worth living in.”

On being discouraged: “There are times when we get a little sad and say, ‘This is too big, there’s nothing we can do about it.’ But we have to say, no! Oceana’s ‘Save the oceans: Feed the world’ campaign is an ambitious, data-driven, strategic, well-funded initiative; if we can affect policy in 30 countries, we could impact 90 percent of the world’s fisheries.” Alya B. Honasan