Hanging out with John Lloyd Cruz at SaGuijo | Inquirer Lifestyle 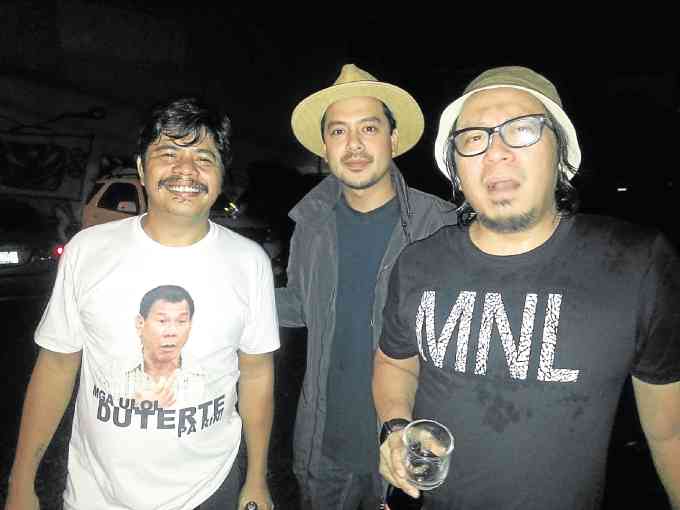 Hanging out with John Lloyd Cruz at SaGuijo

It was nice to catch Lourd de Veyra one late Friday night at SaGuijo. He was playing guitar in a band called Kapitan Kulam, whose lead singer happens to be Jun Sabayton, one of De Veyra’s cohorts on the TV5 show “Kontrabando.”

The music of Kapitan Kulam—a loud hybrid of hard-core punk, thrash and grunge—is apparently a far cry from the jazz/ska leanings of De Veyra’s main band, Radioactive Sago Project. And while Lourd delivers spoken-word lyrics when fronting Sago, Jun screams his lungs out with Kapitan Kulam.

We heard only five songs, but they were enough to refresh us from desk-work fatigue.

Moments after the crowd stepped out of SaGuijo’s cramped room to smoke and shoot the breeze, John Lloyd Cruz walked in. We deliberately ignored him, sensing that he needed privacy.

But a few minutes later, as we were having a good laugh with Lourd and Jun at the parking lot, John approached our group. Turned out that he, Lourd and Jun are good friends.

What followed was a short but engaging conversation that touched on film and John’s musings as an actor. He has of late been immersing in roles with depth and substance that challenge his skills and expectations.

As we excused ourself to go back to the newsroom, John extended his hand and thanked us for the company.

The recent sold-out concert of Charlie Puth at Kia Theatre in Cubao had two interesting revelations: first, it’s no longer unusual to see grade-school kids, some as young as nine years old, watching gigs; second, it was a good decision for the Araneta Group to refurbish the defunct New Frontier Theatre and reopen it as the Kia Theatre, whose 2,385-seating capacity makes it an ideal venue for medium-size shows.